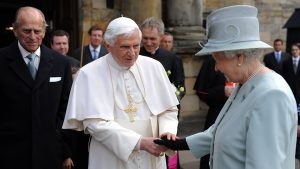 (Queen shamefully tilts her head in submission to the pope)

Anyone who lives in the UK and has a television, radio or Internet access, cannot possibly have escaped the amount of reverential and way over the top, press coverage that the pope’s visit has generated this past week.

We knew from the moment he landed on UK soil, that we would have to travel to at least one of his “events” and do some much-needed outreach.

So after two pick-ups and 100 miles later, our tiny group of just three, arrived in Birmingham city centre. Our initial impressions were how run down the city was. And we wondered could this cash-strapped town really afford the massive security cost of Benedict’s visit?

After driving around the town three or four times (none of us had been there before), we eventually found a place to park. The price was expensive, equivalent to airport costs. We got out of the car and off we went. Five minutes later, we realised the camera and microphone was still in the car. James went back to get it. On route, he felt sick and could hardly breathe. Was this a demonic attack of some sort, or was he just feeling woozy? Either way, the impact lasted for over an hour. He later said how this was the nearest to Hell we would ever be! (Standing just yards from the pope, was not only eerie but something none of us ever wants to experience again).

After a good 15-minute walk we soon came across a huge wall of police officers. So much security for just one man! (What would the Apostle Peter have made of this? Do you think Nero would have afforded him the keys to the city and his own private army!)

James counted about 10 police cars following Benedict’s private limousine. In fact, due to our small group, which included a brother from London, the pope’s security detail quickly adapted and sent his empty “popemobile” down a side road. He then withdrew from his impromptu walkabout and baby “blessings” and sped past us. He had been scheduled to do a “driveby” and public “wave-a-thone” but having the word of God held up in rebuke to him, wouldn’t make for happy viewing during the evening news bulletins, now would it.

Once he departed the crowds soon dispersed. Many tracts were given out. As we packed up and started walking down the road, a Muslim police officer asked to read the banners. This lead to a witness encounter between him and Patrick. Another man joined in, but he was arguing against us. As this wasn’t going anywhere, we departed, but not before we tried to give some tracts to a group of priests. They smugly declined.

By now we had had several more conversations, one with a drunk, an ex-Catholic turned atheist, and one failed attempt to give a tract to another priest, this one from the US.

Our final thoughts on this very expensive propaganda and ecumenical “tripe” were one of repulsion and grief. To see Prince Philip meet the pope on his arrival in Scotland, and Prime Minister Cameron see him off and even wave at him from Birmingham International Airport, flanked by senior Cardinals and others, is too much to really take in. What the Jesuits covertly began centuries ago now seems to have taken real ground.

And while the press justifiably continued to ask awkward and embarrassing questions about his churches endemic and financially devastating child abuse problem (this has gone on for centuries, not just decades), it was wisely noted from Patrick that the pope’s private meeting with a hand-picked group, not only allowed Benedict the chance to pray with them (are they still practising Catholics we ask?), but to meet them on church grounds, i.e., the Nuncio’s official residence in the upmarket town of Wimbledon, South London, meant he enjoyed full diplomatic immunity, should anything he say be later used against him. How clever! How conniving! How shrewd must his spin-doctors be!

What must the old man from Rome have thought on his private plane back to the Vatican? I think we all know. 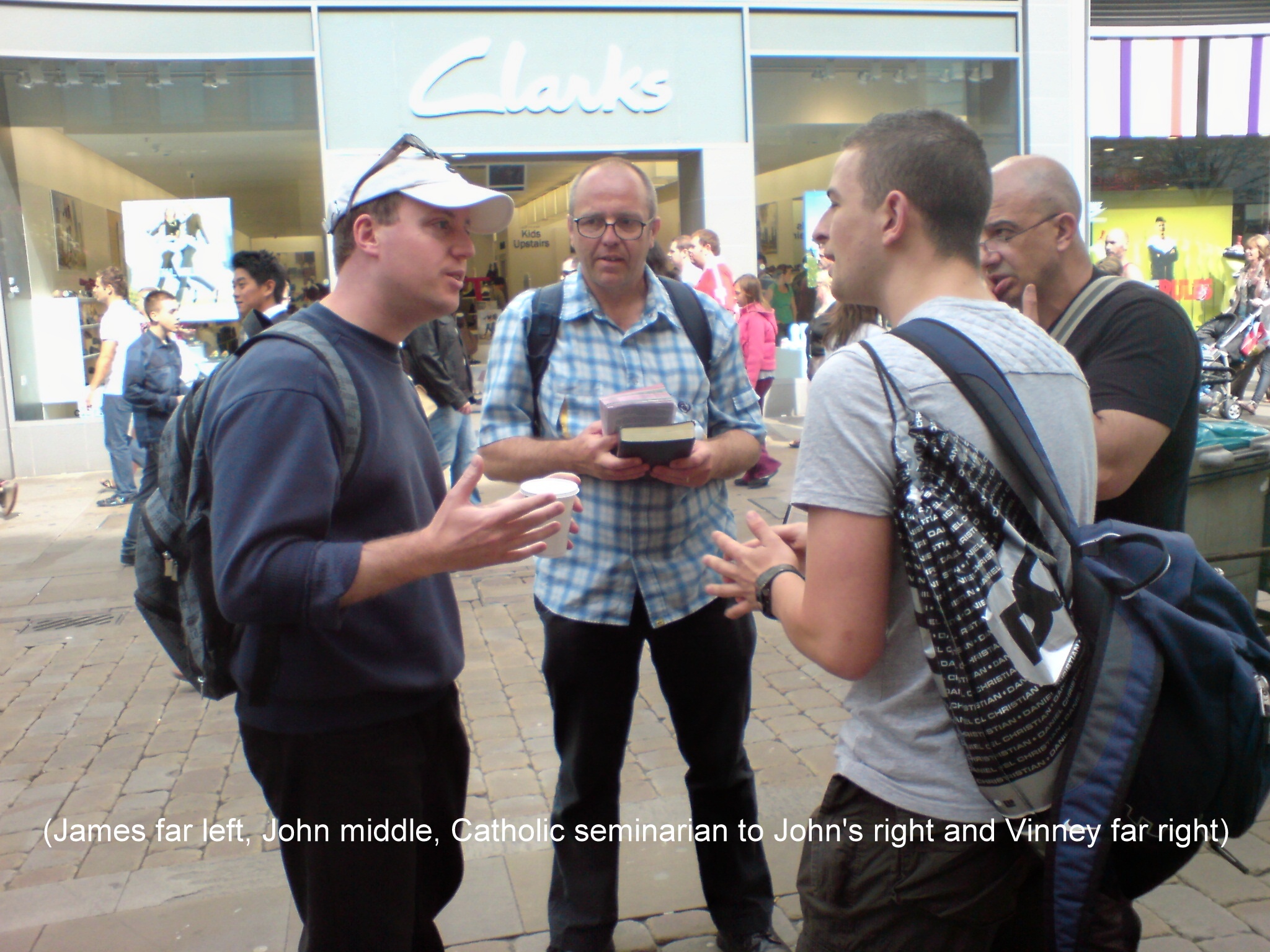 The first Saturday of the month saw us take to the streets and it wasn’t long before James noticed another brother calling him over to help witness to a Catholic seminarian. (This part of town is rather small and therefore we often bump into other ministries doing their own outreach work). This man was certainly committed, articulate and passionate, but as I put it to him, for all the wrong reasons. He didn’t like this at all and quickly shook his head at me. I asked him if he had always been a Catholic and he said yes. I then asked him if he had ever examined anything outside of Catholicism, and he said no. Indoctrination was my prognosis! I tried three times to find out what his final authority was. “When your church says one thing and the Bible says another, what do you do?” He replied, “Give me an example”? “The Bible says there is only one Mediator between God and Man, and it’s not Mary, but JESUS” (1 Tim. 2:5). He then gave me what sounded like a scripted response, from John 19:26 but it made no sense. I pressed him again and he failed to answer my question with any level of Biblical legitimacy.

My next step was to try and help him see the heresy of praying to Mary. “We don’t pray to her, we pray with her,” he boldly proclaimed. “You’re praying to a dead woman,” I said! “We don’t believe she is dead,” he replied. Technically he’s right. She isn’t dead but alive in Heaven. But she cannot hear you, nor answer prayer, only God can, so she is dead as far as those of us alive on earth are concerned. He then gave me another scripted statement about her alleged “bodily assumption” into Heaven. “Scripture please,” I asked. He admitted there wasn’t any. I told him to look up the word “pray” in the dictionary, for it says, “a request for help or expression of thanks addressed to God or another deity.” By this time another former Catholic (seen far right) had shown him over a dozen verses. I then said to this seminarian, “He has shown you numerous verses to affirm our position and you haven’t cited anything from the Bible to correct him, just your own private views, thoughts, and Catholic doctrine.”

(This is the problem with Catholics and cults in general. They are blinded with their own traditions and this keeps them in utter darkness. They cannot think for themselves. They are like infants relying on their parents to do everything for them. For example, if you were to ask five Jehovah’s Witnesses the same doctrinal question, regardless of where they live in the UK, chances are the same answer would be given. Yet in the Bible, we read of Paul and Barnabas (both Apostles) being totally unable to decide whether or not John Mark should join them in the work or not, “…And the contention was so sharp between them, that they departed asunder one from the other: and so Barnabas took Mark, and sailed unto Cyprus” (Acts 15:36-40).

With the other two brothers witnessing to him, I stood back, not wanting to box him in. Three against one isn’t fair! As I prepared to leave him in the safe hands of John and Vinney, I said to him, “You cannot to go Heaven without a priest.” He looked a little bemused at this. I repeated myself a few more times, trying hard to get him to see the folly of his work-righteous system, not to mention his tragic reliance on another mortal man to “forgive him his sins.” As we talked about this, a Catholic lady overheard my witnessing and came over (more on her soon.) I then decided to close this brief but important witness. “If we thought you were a Christian we wouldn’t have spent the time we have, witnessing and trying to help you see the errors of your ways.” It would be easy to keep walking, but because Catholics aren’t Christians, we are compelled to witness to you.” You’re not saved. You’re lost. You’re deceived. Unless you repent you’ll go to Hell.” He then said something like, “Where’s the love from you.” How much “love” does one need to demonstrate, when a house is burning down and you have minutes if not seconds, to pull people out? So how does one answer such a weak and messily statement? I tried to impress my sincerity on him but he didn’t want to hear anything more from me so I then turned from him, to continue my witness to this Catholic lady. 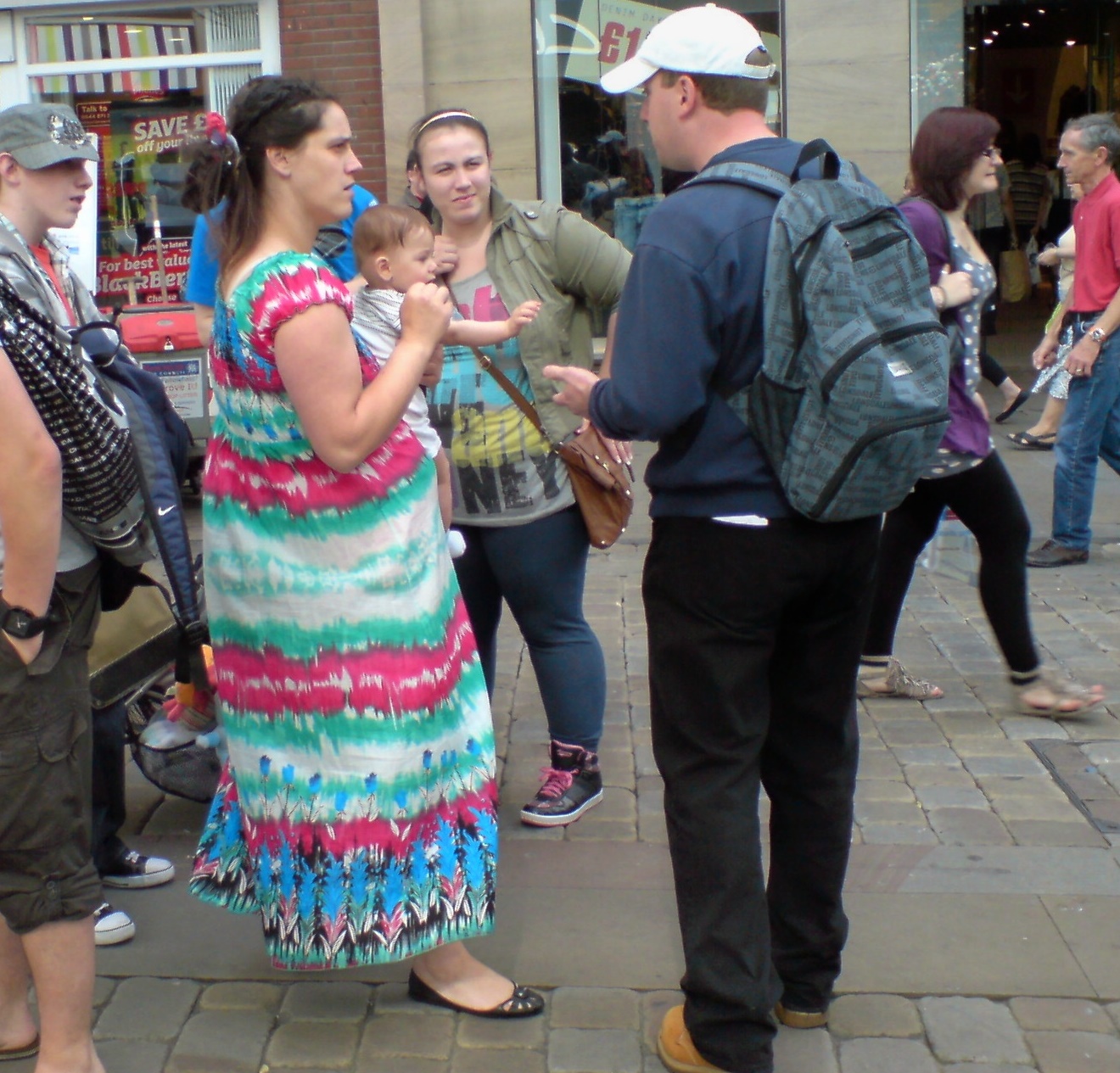 This lady was insistent on priests having “magical powers” to change a piece of bread into the Lord of the Universe. I did my best with her and asked her to go home and read John’s Gospel, one chapter at a time, and ask God to guide her. She persisted on asking me about why I said this seminarian was deceived. I told her that if one’s heart isn’t right with God, our lives wouldn’t be right with Him. I told her Hell was full of “good people” and that she must repent to be saved. For some strange reason, she couldn’t grasp what deceived meant, whether theologically speaking or just in the general sense of the word. “I probably know more Bible than you do,” she spurted out at me. “You may well do,” I said. But unless you’re born again, you’re lost.” “Have you ever seen Jesus,” she asked? “No, but I’ve heard His voice (not audibly) and felt His presence.” Do you know Him personally,” I said? She didn’t understand what I was speaking about. How frustrating I thought! I tried to impress the importance of real repentance to her, and even shared Matt. 10:37, where Jesus said one must love Him more than their own family to be a disciple of His. She looked stunned at this and picked up her newborn baby to impress her disgust at me. This wasn’t an easy witness as I could felt the tension in the air and wondered whether or not things might escalate but as soon as she came over, she quickly left. I tried to thank her for her time but I felt she thought of me as something she’d just walked in.

Prayers for both parties are kindly sought.