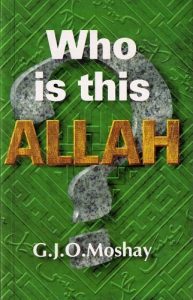 With Ramadan now ended and Muslims celebrating Eid this month (in strict Islamic countries Muslims caught not praying five times a day can be killed by their peers) we felt it would be timely to review two books on Islam for this months newsletter. The first being “Who Is This Allah?” by G. J. O Moshay, 2004, which was an enjoyable read and took just three nights to finish.

Criticism has been levied however at the Nigerian author for opting to partly remain anonymous. Islam is the only religion in the world that not only murders critics of their religion but also threatens to ruin those that dare speak against their prophet. (Only the Catholic church can and does match such fanaticism). So it is understandable the writer of this book has chosen to remain behind the scenes.

Regrettably, when it comes to Islam there remains little objective and critical material available for Bible believers from those that have been saved out of Islam. Most of the material out there is sugar-coated and barely gets to the heart of this 6th-century religion.

Here are our main points of interest from Moshay’s 183-page book:

The second book we are happy to recommend and which was rapidly read and reviewed for this months newsletter is the following by Suradi Ben Abraham “Personal Evangelism,” a rare 1998 paperback from Indonesia which coincidently is also 183 pages! 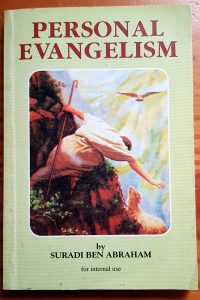 Mr Abraham was an Indonesian medical consultant and former Muslim turned Christian who not only had the courage to print such a book in the world’s largest Islamic country but due to his great success at leading many Muslims to Christ (he baptized many imams) a Fatwah (death threat) was served on him (like a contract killing the Catholic mafia are known to order for their enemies) so he was forced to flee to America for sanctuary and political asylum.

We at this ministry are happy to recommend both books to Christians and Muslims alike to get and examine. With few in the west having any firsthand experience into such a culture Messers Moshay and Abraham’s firsthand experience certainly help us in understanding historical Islam.

Linguistic issues were possibly the reason for this, in which case, we fully understand and salute and thank both gentlemen for being courageous and bold enough to risk their lives in producing two excellent and informative books.

When it comes to trying to understand how and why Catholics and Muslims have been able to unite so successfully in recent years (known as “Chrislam”) it must be understood that both religions consider Mary to have been born without sin. Muslims believe she was born pure whereas Catholics believe she was immaculately conceived.  Their shared love for her trumps and distorts their love for the Messiah.

Much of the material the authors cited in this article comes from the Hadith, not the Quran. The former is actually a commentary on the latter. Both cannot be separated and so should any Muslim try to deflect criticism away from the historical points found in this article, they are basically throwing up a smokescreen hoping the reader is ignorant enough of Islamic history to not know this. Those that refuse to follow the Hadith to the letter ‘must be given up’ (killed).

Another justified point of concern when it comes to anyone wanting to understand the difference between the Bible and the Quran would be how not only Muhammad was unable to read and write, but how he alleged an angel gave him his message and then he dictated this message to others who then wrote it down before reading it back to him. (Recent experts on Islam now suggest the Quran was actually written hundreds of years after Muhammed’s death by those that clearly didn’t even know him). The Bible, however, has ultimately only one author, the Holy Spirit. And He the Holy Spirit inspired the writers to write down everything He told them. The writers were able to check their own writings whereas Muhammad was not able to check what his followers wrote because he was illiterate. (The New Testament was not only written between 39-65 AD, excluding Revelation, which was written around 95 AD, but all of the books in the NT were written by those that knew Jesus and therefore their account is firsthand and written less than 40 years after Jesus’ resurrection and assumption back to heaven).

The following verse continues to be the best and most successful when it comes to leading Muslims to the Messiah: “Jesus saith unto him, I am the way, the truth, and the life: no man cometh unto the Father, but by me” (John 14:6).