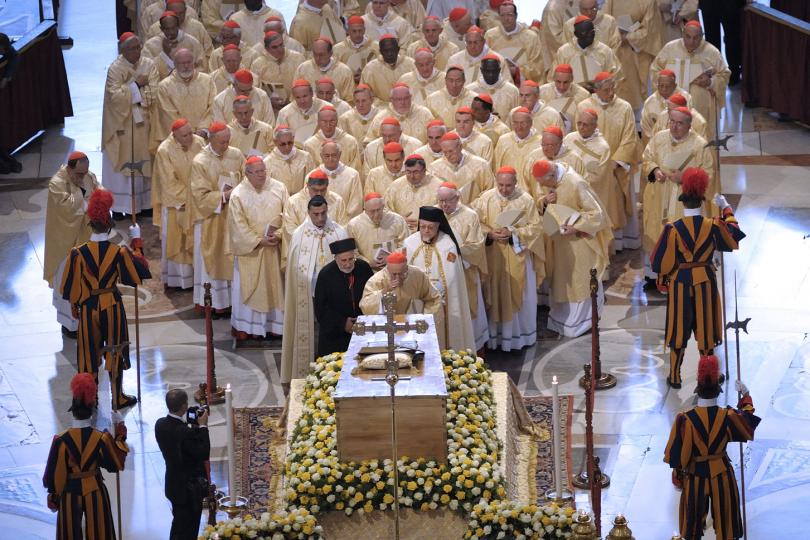 This past weekend in Vatican City, the present incumbent pope completed a week-long “fest” for the so-called “canonisation” of two previous popes: Angelo Roncalli and Karol Wojtyla, aka, John XXIII and John Paul II, respectively.

John XXIII has long been referred to as “good,” with Pope John Paul II now being referred to as “great.” Yet the Holy Bible states quite clearly, how, ‘none is good, save one, that is, God’ (Luke 18:19.) (One should never be associated with self-righteous and useless vain titles either).

Apparently, over 1 million pilgrims attended the event, which cost 5 million pounds, and even had mounted knights clad in tunics and armour, who had made the journey from Poland to Rome, on horseback, can you believe that?  And we have also read of phials of Wojtyla’s blood being hidden in desk drawers, along with bones and other gruesome relics, seems to have been introduced into this blasphemous ceremony. Oh and don’t overlook the “miracle” dried blood of St. Januarius that is frequently displayed in Naples cathedral!

All of this is simple sorcery, of course, practised on a sickening Satanic scale, no less, that even the fictitious “Merlin” would envy if he had indeed existed. But of course, the reigning counterfeit church of Rome was long ago sired out of the loins of the pagan religion of Constantine. Indeed, so many of the assorted gold- threaded vestments that were worn for the event this past weekend were decadent symbols of old pagan Rome, worn and adorned by their numerous temple priests. Just how sick it is, when you realise that millions of true Christians of that terrible era were slaughtered and cruelly sacrificed in the Coliseum in Rome; it’s pretty alarming, I suggest.

But one tragic event, which almost derailed this extravaganza before it had even started, was the horrific death of a local construction worker who was crushed when a 100-foot crucifix of Christ, which had been erected in honour of John Paul II, fell on him. One cannot help but recall the story from Scripture when the pagan statue of Dagon fell and broke (1 Sam. 5:4). The Lord was clearly venting His righteous anger then, and now He seems to have vented His righteous anger again.

While God does allow, for the most part, unsaved people to go their own way in life, He does intervene, either through man’s conscience or sometimes through something as spectacular as this, to warn man of his sin and impending judgment. And yet at the same time, the Bible believer understands perfectly well how God will also sit back and allow such gross and wicked idolatry to run its course, as in this case of a corporate gathering of ignorant and superstitious catholics, as they over-indulged, in this mass-bewitched fest.

However, as they say in showbiz, “the show must go on,” and so this past Lord’s Day, with much of the catholic and generally bemused viewing world tuning in to watch, live from Vatican square, under that monstrous masonic monument, with television cameras beaming live 3D pictures around globe, as man makes man a “saint.” (Scripture makes it abundantly clear that all born-again Bible believers are already saints, but in catholic tradition, making a dead person a “saint” means they can now ‘be prayed to’ and asked to ‘intercede’on behalf of ignorant lost sinners here on earth).

On top of this absurdity, the moment a person joins the elite class of ‘sainthood,’ relics and artefacts rake in even more money for an already cruel and corrupt church. Only faith alone in the precious blood of Christ alone can and does save a lost sinner.

You know that we at this ministry if we had been able to get anywhere near this creepy carnival, would have been handing out Bible tracts at that location and holding up Christian banners proclaiming that you must be born again. Amazingly, it seems that twenty-four prime ministers and nineteen heads of state were invited and expected to attend. And, of course, they will all be there in their finery, along with other atheists and agnostics, as well as the interfaith, and of course the ecumenical movement, who somehow always seem to get something out of this high theatre, under the direction of Lucifer himself, of course. And who knows, maybe the antichrist himself was in the front row, perched on a velvet high-backed chair, clapping with glee and joy as the Saviour is once again mocked and spat upon in the heretical high mass.

Oh, and don’t overlook the false prophet being included as well, because he certainly will feel very much at home amongst these religious relics, both worn and worshipped, as well as that blasphemous ceremonial “broken cross,” which was naturally held high by the pontiff for all the deluded faithful to venerate and worship, how sickening.

The present pope remarked recently, with pride, that: “John Paul II taught us, by hiding nothing from others, to suffer and to die, and that, in my opinion, is heroic.” Well, Francis, try explaining that, if you will, to the hundreds of thousands of boys and girls who were regularly sexually abused by the clerics and nuns of your church. And another man who was also there, was the old enforcer himself for John Paul II, Joseph Ratzinger, aka, Benedict XVI.

These remarks are hideous to hear and what with the current on-going allegations of sexual abuse by the clergy over recent decades, and with the Vatican and its administrative cover-up being examined for evidence by the UN Human Rights Court, and maybe lawyers at the International Criminal Court at the Hague may also be interested in examining this serious matter, it should not be overlooked that ordinary men and women strive through the judicial system and over years of pain, to seek some final justice and closure that sadly never seems to arrive for them.

As regards the so-called necessary “miracles” (the role of ‘Devil’s advocate’ was abolished by John Paul II) that are attributed to these dead men’s intercessions, as demanded by the catholic church, primarily for cures for assorted illnesses, should not all of that wonderful glory of a clean bill of health be reserved only for the risen Christ? Certainly, these dead popes had nothing to do with it at all. They are simply dead themselves and know nothing whatsoever of what is occurring here today, and that includes Mary the mother of Jesus as well. Right now, all previous popes and millions of others are waiting to be individually judged at the Great White Throne one day in the future. And remember! There will be no preference whatsoever for a persons importance or title was on earth. If you’re not already saved, then you are lost. No doubt about it.

One additional and very important point which must be made in reference to having prayers “answered” by praying to dead people would be that, not only can the human body heal itself from time to time, but also that Satan can and does muddy the waters in order to steal the spotlight away from the one true God and leave deceived people in even more bondage to a surrogate church.

A person must, therefore, be born again, then walk in the Spirit of God and read and meditate on the word of God daily, in order to avoid ever being on the wrong side of God (1 Thess. 5:21).

Under the blasphemous broken cross, assorted blood samples and a slice of skin from both dead popes were kissed by the current pope. A gruesome gesture, no doubt in this double-barrelled ceremony. The event was sponsored by banks and oil cartels. 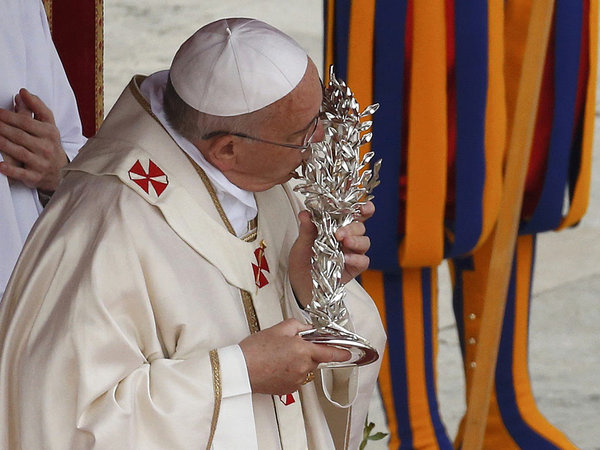 (Kissing one of the relics)

Priests, Brussels officials and others dozed the morning away during the pope’s Latin homily. But, for the pope to claim that both dead popes “looked upon the wounds of Jesus Christ” is sickening. John Paul II was certainly not the “pope of the family,” certainly not for the scores of families abused during after his reign.

The event was simply man-made for an old-boys get-together, never God-inspired but mainly a crafted Vatican honours system for its own. We, as the true born-again saints look towards the coming New Jerusalem for our security and refuge, which neither Rome, with its papal power or poison can provide. The event was rather like a shooting star that flares suddenly, then fades into oblivion.

So, in conclusion, we once again urge all catholics, who are still in this counterfeit church system, to re-evaluate their present position, and then quickly make an exit. After they have done this, we would invite them to be born again by tasting and trusting in the sanctified saving Spirit and perpetual comfort of the Lord Jesus Christ. You are not, and never will be, saved by your membership in the church of Rome. Rather, its teachings will lead you to the loss of your immortal soul, and that is the tragedy: that Rome, through its spells, is still deceiving so many today.

This past ceremony is no doubt a possible future technological foretaste of how the coming Antichrist will delude this world with his personality and false pious statements, and maybe he will speak from that Vatican square in the near future! I would not be at all surprised because Lucifer (and his cohorts in the media) seeks, all accoutrements at his disposal, to blind and bind this fallen world to his wicked ways, and through the present papacy, he seems to be succeeding. So, make sure you are not one of those lost souls searching for a faith in a false religion; rather as the apostle Paul says: “Examine yourselves, whether ye be in the faith; prove your own selves” (2 Cor. 13:5).