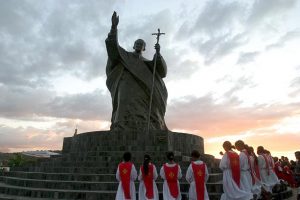 It was announced that in October the Vatican will create two new ‘saints’ for their church.

John Paul II and John XXIII will become ‘saints’ but only for Roman Catholics of course. The born again Christian automatically becomes a saint of God the moment he/she gets saved.

Both of these deceased men would not have given the true born again believer the time of day, Rome time or any other that is. And in fact, John Paul II referred to evangelicals in a most derogatory manner as ‘wolves! something he shamefully never apologised for either.

The process Rome insists upon to investigate future ‘sainthood’ is not Biblical, and the thought of praying to dead people in general for any miracle is detestable and obscene.

If you are going to pray then go to the true Shepherd and not one of those corpses who cannot assist you in any spiritual manner.

This ministry has written about both of these men in our Catholic section. During their lives, these men controlled billions of pounds and dollars for worldwide distribution in many suspect ways. They surrounded themselves with bodyguards and mercenaries, with some even armed; nowhere in the early church was this manner of worship or lifestyle even seen or encouraged.

In fact, the apostle Paul was homeless most of his preaching life and the Son of God frequently had nowhere to lay His head. Yet I suspect this pope, his cardinals and bishops could lay claim to over a dozen places of accommodation and villas if so needed to lay their own heads.

These men who claimed to be ‘the vicars of Christ’ were just religious politicians and imposters uttering pious and empty words through their encyclicals and world travels. It’s been popularly referred to as ‘Vatican spin.’ 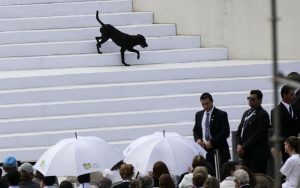 The new pope has just returned from a trip to Brazil and in full view of the faithful on the Copacabana Beach, and for all to see, is the hideous and blasphemous broken cross, the traditional symbol of Satanism and his ilk. At the religious ceremonies, its distorted face grins down at the adoring millions who look up to it with veneration and hope. And did anyone notice as I did that black dog slinking its way down the steps from the high altar? Maybe it marked the spot for the arrival of its approaching master, the prince of the air who delights in high places and mountains. Remember the temptation of Christ on the high mountains in Matthew 4:1-11, that failed.

Also on the Copacabana Beach with its mountain background where the faithful wait and pray, there was not a hoisted Bible banner in sight to be seen, nor would the local hierarchy wish for it. It might, after all, take away far too much of the glamour and circus from this Jesuit pope and his entourage (including cardinal Bertone, another clerical subject, written about on our website).

One other interesting aspect of his trip was when he briefed the press on his official plane and made it very clear how homosexual priests, and probably the laity too, wouldn’t be condemned by him or any of his staff. In what sounded so pious, the ‘infallible’ pope said ‘who was he to judge homosexuals.’ In recent months the Vatican has been rocked by many deviant sex-scandals in the Curia. So maybe this elderly pope has just thrown in the towel and succumbed to the erroneous and endemic politically correct ‘gospel’ that continues to sweep and drown an already dark and dying world. Maybe he is going to allow fornication and adultery next too!

As the old saying goes, “It’s the little things that betray so much.”

But rejoice, the Prince of Peace is coming and soon as He said, “I am the light of the world” and without Jesus Christ, all men are in total darkness about spiritual and eternal realities.