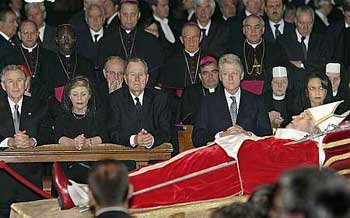 Throughout Rome’s long and bloody history, the one thing that she has always and consistently demanded of the world is total submission, no matter what.

“Pope Gregory was the first who claimed, as the representative of Deity, to be above all the kings of the world” (Grattan Guinness, Romanism and the Reformation, p. 18).

With this new power in hand, popes (prior to the Second Vatican Council) actually had the authority in many cases, to personally choose world leaders (Catholic Encyclopaedia, Vol. II, p. 666).

Or, in the words of pope Boniface VIII:

“The Pope is of so great dignity and excellence, that he is not merely man, but as if God, and the vicar of God. The Pope alone is called most Holy Divine monarch, and supreme emperor, and king of kings. The pope is of great dignity and power, that he constitutes one and the same tribunal with Christ, so that whatsoever the pope does seems to proceed from the mouth of God. The pope is as God on earth.”

In 1949 Pope Pius XII told his priests, how they were not obliged to submit to civil authorities in whatever country they resigned (Catholic Encyclopaedia, Vol. XIV, p. 779.)

“The king of England [15th century] agreed to hold his kingdom as the pope’s feudatory and to pay him annually one hundred thousand marks as an acknowledgement…Then the great and valiant emperor of Germany stood for three winter days and nights barefoot in the courtyard of his holiness, waiting for the honour of an audience, in which he might beg the pope’s pardon for having acted as an independent monarch!” (Guinness, p. 48,49.)

Pope John Paul II’s long reign had only been successful, due to the iron grip and fear that he had had on his church, with his army of priests worldwide feeling the wrath.

During his time on his throne, he had excommunicated and censored some theologians and bishops, which hadn’t agreed with him on his churches teachings (and some non-areas of theology too.)

(The Vatican, much like the Jehovah’s Witnesses and pretty much all cults for that matter, view themselves as a modern-day theocratic organization, which sees only “their leaders” being privileged to “receive special revelation from Heaven, or in occult circles, to be “channelled” via the Holy Spirit, or so they would have the ignorant belief.)

According to the Catholic writer, John Cornwell, Joseph Ratzinger before becoming pope, gave a speech in Spain, in which he commented about the Inquisition as being:

“Not as dark as is thought.” He went on further to justify it by saying: “It fought against fanaticism” and its methods were “much more humane” than is generally appreciated (Sunday Times, 23/8/98.)

Although the official bloodthirsty inquisition has long ceased, Cromwell stated the following about a new wave of inquisition that commenced in 1903, under pope Pius X and dubbed the “black terror,” but this time using more indirect and subtle methods of controlling and silencing those who’d dare rebel and question their churches views and beliefs:

“Sister Lavina is a Roman Catholic nun, a member of the Institute of the Blessed Virgin Mary… Bryne wrote a book published in 1994 called Women on the Altar. It modestly advocated ordination for women…. copies of the book quickly sold out in Britain…at the behest of the Vatican, the press recently removed the 1300 copies of the book it had left. It is deciding whether to incinerate or pulp them. Byrne has no idea who reported, or “delated”, her book to Rome. But she believes it was the work of right-wing Catholic women in England who target women “dissidents” and bombard the Vatican with complaining letters and calls for radical action.”

Cromwell again states the following about this new wave of inquisition:

“To silence the modernists, he [pope Pius X] established a worldwide spy and propaganda network. It was directed by a grotesque individual – clumsy, overweight, myopic, with steel-rimmed spectacles – called Umberto Benigni.

A former journalist and editor, Benigni used the most up-to-date media methods, stringers, telegrams, copying machines, to collect anonymous information on Catholic priests and scholars the world over.

He had a liking for secret codes and nicknames, referring to Pius X in his cables as “Mama”….at Benigni’s suggestion, Pius X insisted that Catholic ordinands must take an anti-modernist oath. This involved assent to all papal teaching, both as to content and as to the “sense” in which the Vatican meant it to be understood.

Such internal assent went beyond anything dreamt up even by Stalin or the worst imaginings of George Orwell. The oath survives to this day in a new but similarly encompassing formula taken by Catholic ordinands, seminary teachers and Catholic university theologians.

The pernicious result of Pius X’s campaign was the shackling of free and imaginative Catholic thinking, discussion and writing for the next 50 years. In the 1950s, a number of Catholic thinkers attempted to break out of the constraints imposed by Pius X, but Pius XII resumed the campaign.

In an encyclical entitled Of Human Nature, he declared that, once the pope has pronounced on a topic of faith or morals, all discussion must end, even among competent theologians.

“I would prefer Hitler’s courts, he said, to another papal interrogation. Hitler’s trials were certainly more dangerous, but they were not an offence to my honour.”

The Times, on 16th June 2004 reported how the Vatican had issued a statement in which they once again tried to play down their bloodthirsty past.

They claimed that out of the 125,000 known trials of suspected “heretics” in Spain, about 1% of the defendants were executed, far fewer than commonly believed. Many of the burnings at the stake were carried out by civil rather than religious tribunals.

“That actions which had disfigured the face of the Church had to be viewed in their historical context.”

While it is true that some people distort history to suit their own hidden agenda, it must also be said that the Catholic church is certainly guilty of this. And while Rome to this day insists this “programming,” much like the way the Chinese do to their citizens, was in the best interest of the “heretic,” isn’t it more truthful to say that this was done primarily for one purpose: keep the power over the people and not to lose their financial empire.

We find exactly the same thing in Scripture: “If we let him thus alone, all men will believe on him: and the Romans shall come and take away both our place and nation….then from that day forth they took “counsel” together for to put him to death” (John 11:48-53.)

So one would do well to take heed to the above verse and Rome’s bloody past in general, and not allow oneself to be deceived or groomed into falling for any of her seductive lies, but test everything she teaches and does in light of Scripture, for only then will one be able to infallibly understand just what a counterfeit and antichrist church looks like.