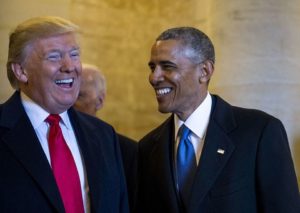 Nowhere in the word of God are we told to raise money, canvass or even vote for politicians. Much of what the media and print press relay to us is nothing more than a game – a pantomime. Good cop, bad cop. We are, however, commanded to lead peaceful and quiet lives, and especially pray for our leaders, regardless of their political persuasion.

In 2007/9 Obama’s campaign raised a staggering 2 billion dollars to put him into a job that pays less than half a million a year!

What is sad and sinful is when saved people fight and fall out with friends and family over politicians, whereas politicians rarely if ever fall out amongst themselves over those that voted them in.

The children of many of these famous and privileged politicians are actually very close friends. Chelsea Clinton is good friends with Ivanka Kushner. Both are actually liberal democrats.

Tony Blair’s eldest son worked for a Republican senator in Washington (not a democrat) for his work experience.

So be careful not to be torn between either side for in reality there is very little difference. It’s all basically cosmetic and sheer window shopping at best.

The Church is a called-out people. Any spare time and energy we have are best spent preaching and pleading with people to get saved and not propping up politicians who for the most part only want as much power as is possible for as long as is possible.

And it should also be pointed out how we don’t have a democracy per se but an oligarchy. But of course, this is better than living in an atheist or Islamic nation!