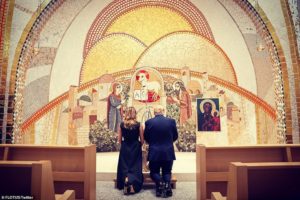 One would expect Biden or Pelosi to kneel at a Catholic shrine in honour of Pope John Paul II and ask to be photographed in order to win votes from Catholics, but sadly Trump who according to Paula White and other apostate evangelicals is born again happily knelt alongside his Catholic wife at a statue of the pope inside a building set up in memory of John Paul II! This breaks the first 2 commandments from Exodus 20:1-6, and Paul also condemns this in Roman 2:22.

Pope John Paul II is one of the most notorious popes in recent memory. He worked closely with communists in his native country of Poland, never condemned or excommunicated the IRA, and punished priests that tried to blow the whistle on his church’s long cover-up of evil child abuse. He allowed people to bow down and kiss his hands and call him ‘holy father,’ a title only reserved for God the Father. He also encouraged obscene worship of Mary on a much wider scale than ever before! And he also called ex-Catholics now Bible believers who tried to win Catholics to Christ ‘rapturous wolves.’

Trump not only felt comfortable praying to such a grotesque statue of the late pope but wanted his own White House photographer to capture the moment before posting it to his official Twitter channel!

As of late July 2020, he has not removed this sickening picture from his Twitter account and yet when he received backlash from his own supporters for retweeting a video of one of his supporter’s saying ‘white power’ he quickly removed it. It would appear not enough of his supporters demanded he does the same with this picture!