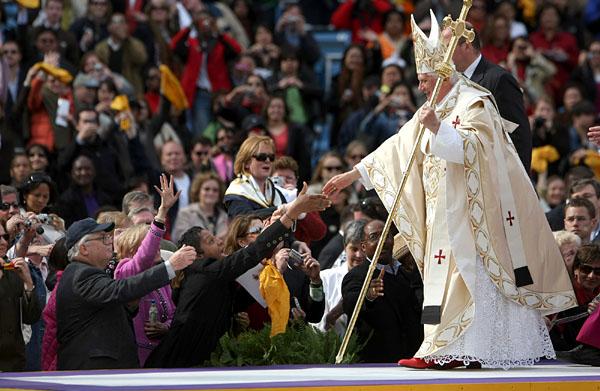 Al-Qaeda would have all Muslims believe that it is their sacred duty to murder all non-Muslims, by crashing aeroplanes into crowded buildings, or blowing people up in various parts of the globe; this is called Jihad.

This they do in the name of organised religion.

Such a barbaric pattern is repeated all over the world from London to the Balkans; Indonesia to Bali; Madrid to Dar Es Salaam; Moscow to Turkey, and from Iraq to New York.

Moderate Muslims reject this and state these individuals are simply fundamentalists, with a “flawed concept” of Islam, even though the word Islam means “submission.”

During the long and brutal history of the Catholic church, they forced millions to convert to their religion or be put to the sword. Some have estimated over 50 million people perished at the hands of Rome, through conquest or subjugation.

They did this in the name of organised religion. Nowhere in the word of God does it order us to force people to convert to Christianity. But remember, the Catholic church is not nor has ever been a Bible-based Christian church.

It has also been argued that more people perished during the dark ages than in both world wars combined.

In Northern Ireland, Protestants and Catholics still continue to harm and maim each other in the name of religion. (There may be a peace process now, but organised and sectarian crime, still flourishes). Since 1969 (known as the troubles) over 3,000 men, women, children, police officers and soldiers have been killed indirectly by organised religion.

It must also be noted how atheistic world leaders have deliberately, and with pleasure, murdered in the name of Darwinism, Marxism, and Maoism. So the theological sword cannot only be pointed at past religious and heretical leaders, such as popes, cardinals, kings, and religious heads of state.

Organised religion, whether it be Catholicism, communism, socialism or atheism, are all equally guilty.

The Chinese dictator, Chairman Mao, once told fellow communist Edgar Snow, that a few eggs needed to be broken to make an omelette. That’s what the religion of Darwinism does to people; it allows them to murder millions of innocent people, whether women or children, healthy or unhealthy, because they believe in no God, no judgment, nor divine dignity for His creation, therefore such dangerous and mentally ill people like Mao, Stalin and Hitler (and all their disciples), are able to use this Satanic philosophy to do as they please with their subjects.

One mustn’t rule out demon-possession either.

And to think Richard Dawkins hates theism. What about these guys? It must grieve the professor that his birth date is tied to the Jesus Christ. For Mr. Dawkins was born in the year of our Lord, 1941.

May we take a brief look at just two of the “fathers” of this religion called communism:

Karl Marx never worked a day in his life. He was no worker, but rather a philosopher, something Scripture deplores (Col. 2:8). When he wasn’t “thinking,” he was a regular drinker in the nearest bar. Tragically several of his young children died of starvation, due to his refusal to work. At best this is negligence, at worst it’s manslaughter.

Joseph Stalin caused his wife to commit suicide, his daughter disowned him, one son deserted and subsequently died in a German concentration camp because Stalin refused to trade one of Hitler’s top generals for his son, and his other son died an alcoholic.

More people have been murdered because of Darwinism than any type of corrupt theism.

While both men may not have killed anybody themselves, they certainly did indirectly through their writings!

The Bible states that all of the above emanates from man’s sinful Adamic nature.

To understand why this happens let’s go back to the beginning.

“And it repented the LORD that he had made man on the earth, and it grieved him at his heart.”

This solemn revelation cannot be overemphasised enough. Here we find the Lord God of the entire universe looking down from Heaven and seeing with disgust His personal creation totally defiled. This is a marked contrast to the picture we are offered in Gen. 1:26-31, when God announces to the Trinity, that they will make man pure and clean in their image. Adam foolishly not only ignored God’s warning not to taste from the tree of life, but listened to his wife when she rebelled against God, and subsequently, both were cursed, along with the whole earth. God had such a rewarding plan for man. Adam had been so privileged that he was able to name all of the animals that God had lovingly created. However, with the fall of man, also came a Redeemer.

God knew that man would tragically fall before he fell, therefore all three members of the Godhead, agreed in eternity past that Jesus would be the Chosen One to redeem mankind.

4,000 years later, the Messiah arrived on earth as a child in a hostile corner of the mighty Roman Empire. He would suffer and die for the world’s past, present and future sins.

“The heart is deceitful above all things, and desperately wicked: who can know it?

The author of Hebrews also echoed this sentiment.

In Matthew’s Gospel, we read how a man came upon Jesus and called Him good Master, and Jesus humbly responded:

Of course, Jesus wasn’t denying His own deity and goodness but rather wanted to emphasise that God is the only Being that is righteously and eternally good. Man can never be morally perfect, without Christ’s righteousness.

For years psychiatrists, psychologists, physiotherapists and social workers have tried in vain to argue that mankind is predominantly good within himself. They clearly don’t believe or understand what God teaches in Scripture. Secular psychology, I believe, cannot be trusted to heal man’s downfall, nor should anyone attempt to do so.

In each of the Gospels, we read the vivid account of the dreadful manner in which the Author of life, Jesus Christ, is murdered with such brutal savagery. Even though this was already consented to by the Godhead, and then foretold by the prophets in the Old Testament, it does not exonerate Jesus’ murderers; it simply presents us with an amazing paradox.

From the moment Jesus was conceived to the moment of His crucifixion, He would be hunted, mocked, cursed, blasphemed, bruised and then with the most painful and humiliating death ever known to mankind, be nailed naked for six long and painful hours at Calvary.

To think He volunteered to do this for the sins of the world makes me very proud to follow Him and trust Him as Saviour and Lord.

To learn that God Himself paid the ultimate divine price to satisfy His own high and infallible standard for righteousness is simply wonderful and breathtaking. Nevermind Romeo and Juliet, this is the greatest story the world has ever known. No other prophet, leader or god ever accomplished or could accomplish what the Lord Jesus Christ did for sinful man. And yes it continues to stager me and more importantly grieves God’s loving and all-forgiving nature, that unrepentant people continue to reject His Son with His message of salvation, and subsequently choose to worship the false gods of materialism, secularism, communism and of course apathy.

“Buddha died looking for the truth. Jesus Christ is the Truth.”

And didn’t Buddha abandon his family for his “higher calling.” He wasted 20 years of his life and his families, trying to seek “the light.”

Then there was Confucius. He got so confused that several times he was found drunk.

It has been stated by others:

“Get out of organised religion and into a personal relationship with Christ.” Only then will you truly be set free from sin and find eternal salvation.

And I say this with a heavy heart, for both sides of my family have been Roman Catholic. Yet organised religion certainly failed them all. My grandfather, who had been 50 years in the church of Rome, was terrified before he died. I doubt he or any of my previous relatives were saved. Sadly they never knew the plan of salvation and organized religion never led them to seek God will all their heart. Yes, they will be judged for their own sins, but I wouldn’t wish to be the priests that sold them a deficient message when judgment at the Great White Throne comes around.

So a brief and necessary recap of the problem of false worship: before people are saved they are greedy, corrupt, evil, and totally despicable. Man cannot be trusted and whatever he touches will be contaminated. This applies to politicians, religious organisations, academics and the legal profession.

As the prophet Isaiah wrote:

“But we are all as an unclean thing, and all our righteousnesses are as filthy rags” (64:6).

Peter, in the presence of a holy God, told Jesus to “depart from him,” so conscious was he of his sin (Luke 5:8).

Not one person listed in this article is an ideal role model. Only Jesus Christ is, and only He could honestly say:

And not one person could do that, even though they hated Him without a cause.

Dear reader if you are trusting in ANYTHING or ANYBODY other than Jesus Christ ALONE, you will NEVER be saved. If you compare yourself to friends, family or peers to justify yourself and sin, you’ll never be forgiven by God but an eternity in Hell awaits you, and this is something that devastates me very much.

Heaven or Hell, the choice is yours. You will spend forever in one destination. Why don’t you today receive the Lord Jesus Christ as YOUR Saviour and not judge?

Please see below how a holy God saved sinful man.

“That if thou shalt confess with thy mouth the Lord Jesus, and shalt believe in thine heart that God hath raised him from the dead, thou shalt be saved. For with the heart man believeth unto righteousness; and with the mouth confession is made unto salvation” (Rom. 10:9-10).