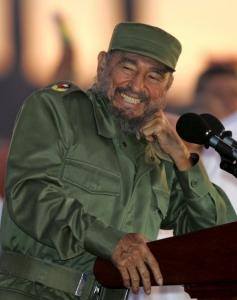 With the demise of Fidel Castro, nicknamed “Cuba’s serial killer,” I suspect that even more crimes against humanity in that impoverished country will finally be revealed. There can be no doubt about it.

As of writing this, people are literally dancing and celebrating in the streets of Miami, USA. They are of course Cuban-Americans that were fortunate enough to escape Castro’s atheist/catholic country, over recent years!

And please don’t be so naive as to believe how all Cubans that are interviewed in Cuba are actually sorry and saddened to see his death. For the most part, they are not only indoctrinated but have secret police watching and monitoring their every move, so they dare not even offer the slightest sigh of relief.

Since the coup of 1958, many have been murdered in the so-called prison “tropical gulags,” either by bullet, malnutrition, or disease. Like many other countries released from a long cruel dictatorship, the U.N.O.M.P. has and still does uncover terrible crimes perpetrated against innocent people in Chile, El Salvador, Iraq, Rwanda, Guatemala, and many other grieving nations.

With the death of Fidel, his brother Raul continues to impose an iron grip on this suppressed nation, delaying many of the corpses of the lost from finally being recovered, and the grim process for investigators with a country slowly coming to terms with its failed past.

During recent decades, over 1.2 million people have braved fatal shark-infested waters escaping from catholic communist Cuba to find a new freedom in capitalist America. Tragically, many would drown in this dangerous process as they escaped Castro’s atheist concentration camp.

To date, an estimated 78,000+ have perished at sea. A shocking figure for any country the size and population of Cuba.

One such case was of the three Lazo children, drowned whilst escaping the Cuban dictatorship.

What those of us in the west experienced in recent months and years, concerning millions of Muslims and others escaping from Islamic countries and elsewhere, via Turkey and Libya in dangerous waters and other suicidal means, to find a “better” and more “peaceful life” in post-Christian Europe, remains a shameful stain on Castro’s dynastic Cuba.

It would appear catholic communism has more in common with Islam than the liberal-biased media would dare report!

Such terrible cases concerning Cuba’s police state can be read on the Truth Recovery Archive on Cuba website.

Many fleeing families in flimsy boats, rubber tyres, and other make-shift crafts would be rammed by Cuban coast guard boats or have heavy sandbags dumped into sinking vessels. This was an act of murder, inflicted upon innocent people by laughing sailors and militia.

Some poor victims (bound and gagged) would be thrown out from fast-moving helicopters, to slowly drown.

Who knows? Perhaps one day, these cruel men will make an appearance at the “International Court of Justice.” I doubt they will be laughing then! 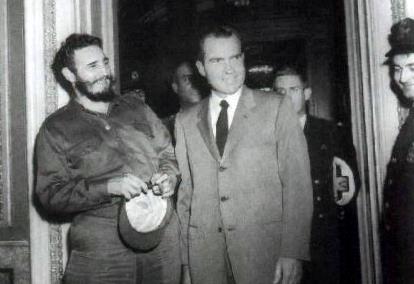 (Nixon, Castro and even the cop enjoy a joke, but the joke is on them)

Two other brutal crimes committed on mainland Cuba is of three Jehovah’s Witnesses, all brothers, who in 1980 after constant persecution by the state, sought asylum in the catholic nuncio’s residence in Havana. Within hours, elite troops from the Ministry of the Interior had stormed the building and bundled them out and into waiting vans. Later, they would be sentenced to death. Nothing more was ever heard of their fate. Sadly, their mother, also a sympathiser of their religious beliefs, would herself serve a lengthy prison sentence!

In 1992 after release, she would beg the authorities for their bones to be returned to her for a family burial.

Another victim of this barbaric regime was a young man (15 years old) named Owen Temprana, who would himself seek asylum in the Ecuadorian Embassy. Sadly the same terrible fate awaited him as the three Cuban brothers. Were not these cases a diplomatic violation of Human Rights?

Many other victims, including catholic nuns, schoolteachers, students, 26 US citizens, and religious leaders of other denominations would suffer the experience of all who bravely opposed Castro’s Marxist rule.

A young catholic priest, Jaime Ortega, who would later become cardinal in Havana, would as a punishment for his opposition to the regime, be sentenced to ten hard months in a labour camp in 1965. (I had heard some years ago of a bishop sentenced to work in the backbreaking sugar fields for speaking out for human rights. This may well have been Ortega).

Fidel Castro was baptised at 8 years of age and educated in the Jesuit system. Since then, he had always had an acrimonious relationship with the catholic church.

Castro would rank among his heroes Robespierre the infamous architect of the great French terror, and even go on to name Jesus Christ as “a great social revolutionary.”

Castro even admired a false interpretation of the Holy Bible, seeing it as a handbook for open revolution to further the wicked aims of socialism. This, I suggest, is blasphemy.

When the pope visited Cuba in 1998, Castro would allow the celebration of Christmas (long since cancelled) to be observed, to a people starved of all choice. And with the pope’s death in 2005, Castro strangely called for three days of mourning for the man, but why? Were these two popular icons “one world men,” perhaps even secret admirers of each other?

Castro’s passing legacy to his country, if any, saw millions escape him and his barbaric system. Yet few have sought to swim to Cuba from America for the good life in that country!

Like so many other tyrants, Fidel Castro died peacefully in his bed, on of all days, “Black Friday,” probably the most capitalist day in the world, somewhat ironic.

Media reports of his flamboyant millionaire lifestyle suggested he fathered at least 9 children with different women and successfully dodged over “600 assassination attempts” on his life.

But death has a price for all of us: “For the wages of sin is death; but the gift of God is eternal life through Jesus Christ our Lord” (Rom. 6:23).

Each person must be prepared to pay the price of receiving Christ or rejecting Him.

Castro’s rallying battle cry, “socialism or death” meant just that to many who opposed him.

Today, it is hoped that the threat of Castro in these words is finally dead and buried.

But others who survived him in high places may yet stand trial in the “International Court of Justice.” Also, a new national civil police will have to be installed to replace the corrupt old order.

One does wonder why there have never been marches anywhere in the world against the police state in Cuba? Many march in the UK against democracy and its failings, but not, it would seem, against Cuba and its military-style thought police. 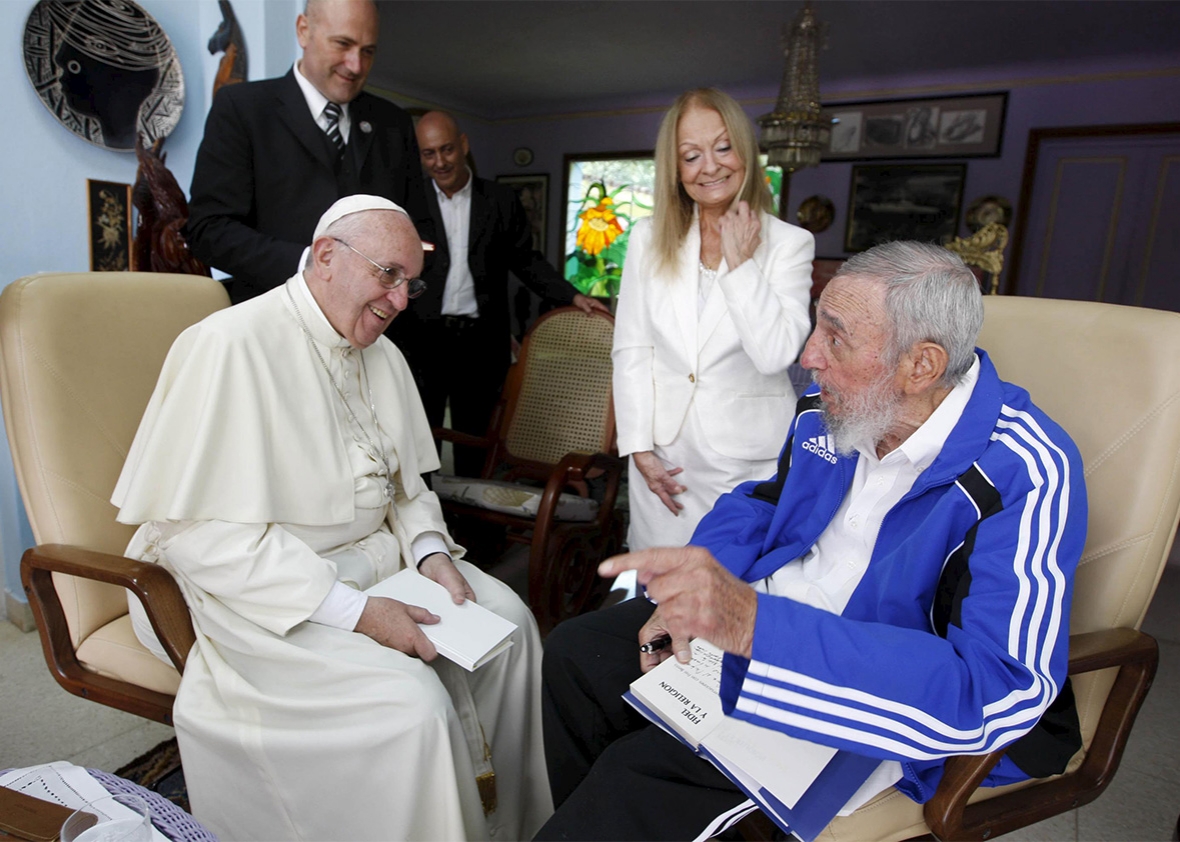 Remember, if you die today, your lasting destination is either Heaven or Hell.

There is no in between, and certainly no purgatory!

If you are born again, and you absolutely must be (see John 3:3-7), then death should have no abiding fear for you. But to die without Christ, according to Matthew 13:50, will witness many “cast into the furnace of fire where there shall be wailing and gnashing of teeth.” What a terrible future for so many lost souls! A never-ending period of pain and punishment! It’s all too much to comprehend, isn’t it? But you know, it’s true!

Fidel Castro’s greatest sin, I suggest, was his unbelief in the Saviour Jesus Christ. Even fabricating Him into a false god only to satisfy his own political ambitions and lies. His lip service to Catholicism could not and never would save him.

In his last few hours, I prayed for him that he might repent of his crimes and sins with genuine sorrow and seek forgiveness for all his cruel acts and words. Of this outcome, I cannot know.

“Condemn me…It doesn’t matter…History will absolve me,” Castro once remarked flippantly. God will not be mocked.

I too was once a sinner who deserved to reside in the darkest pit of Hell. But because of what Jesus Christ suffered 2,000 years ago on my behalf, I can say with assurance and peace of mind, I am saved. Amen and amen. But dear readers after reading this, more importantly, are you saved?

Forget Fidel Castro and where he is now. Where will your final destination be? Now think about it, please! And do let me know.