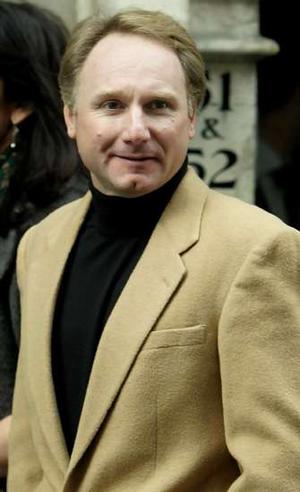 After the runaway success of Mel Gibson’s The Passion of the Christ (which I did pay to see), it comes as no surprise that The Da Vinci Code, authored by Dan Brown, should have the same financial impact. And are we surprised?

I had decided not to purchase a paperback copy. After all, why should my £6.99 go towards making the author even richer ($200 million and 40 million copies sold worldwide).

No, I would reserve a copy from my local library, or I might find it on the shelf, but no such luck. On enquiring about its availability, I was informed by a very helpful librarian that there was a waiting list. I would be number four on the list, and did I want to put my name down on the readers’ list? Now, this was interesting because I had read in one of the national newspapers concerning Brown’s book, that in the Toronto public library there was a seven-month waiting list for his book! I was getting off lightly with a mere three-four week wait. The question I had to ask was could I wait that long, and the answer was, well I suppose I could, and was it worth the wait? After all, seven million copies had been sold since publication!

Sadly I must admit, that it was not.

Interestingly enough in the waiting period between ordering and attempting to read this book (don’t forget, it is fiction!) an artillery of so-called ‘theological bullets’ were descending upon the publishing world concerning this book.

One reviewer of a syndicated American newspaper mass e-mailed fellow co-religionist with the health warning: “true evil may exist” within the covers of Mr Brown’s book.

And the bad, bad Catholic clerical guys known as Opus Dei, who figure very prominently in this novel, posted a damning 4,000-word rebuttal on their website. However, lawyers were not instructed by them to sue Brown or his publishers.

“You’ve read the novel, now read the truth,” declared one such book, offered on the Internet!

Not since Who Shot JFK has such a book claimed a place in the conspiracy theory top-ten list.

What the author has been able to do is to graft together many popular relevant church conspiracy theories and somehow make the plot seem topical. Very ingenious! The Priory of Sion (or Zion) is one such example. Founded in 1099, this shadowy organization seems to have gone into overdrive in the early 20th century.

Protecting the interests of the Priory are the Knights Templar.

All of this so-called ‘historical truth’ has been well documented in the past.

It seems to me that what “Chef” Brown has done is to serve up for our appetite a rich omelette of an irrelevant mish-mash, which if we are not careful will have us reaching for the alka seltzer! And in fact, in the present religious bigotry of today’s political climate, if Dan Brown had taken on Islam with the same ingredients and promoted some of his heresies, a permanent ‘fatwa’ would have been placed at his front door, and also of his obliging publishers. Now, that could be nasty to read about, in any newspaper.

Another idea that is floated in the book concerns the late Walt Disney. According to the author, “Uncle” Walt Disney planted many of the symbols and hidden messages concerning The Holy Grail story into his most famous and much loved Hollywood films.

Well it seems according to the epistle (letter) of Dan Brown, Mary Magdalene married Jesus and they had a son…. (please don’t forget, this is fiction.) She also descended from the tribe of Benjamin (as did the apostle Paul.)

Oh, and also the “F” word raises its head in the long 592 pages of this book. Not once, but many excruciating times. I refer of course to feminism or ‘sacred feminine.’ In fact, the author boldly proclaims, “Jesus was the original feminist!” Now I never read that in Cosmopolitan!

Jesus lived in a male-dominated patriarchal society, this is true. But to be fair to the apostles, they do witness in the four unique gospels, to the image of a woman being the first to arrive at the garden tomb, and would see the risen Saviour. Mention should also be made of the women who remained at the foot of the cross. And yes the frightened apostles did do a runner (except John.)

But to blatantly claim that before Jesus died on that terrible cross, He had married Mary Magdalene (and yes she was much maligned by Pope Gregory the Great.) She was not, nor had ever been a prostitute, is in my opinion, not kosher.

Later Mary journeyed to France with the so-called ‘uncle’ of Jesus, Joseph of Arimathaea? Also with the child of Jesus?

There she was domiciled in the south of France, and the royal bloodline was protected and perpetuated by the Priory of Sion. This offered protection to the Merovingian bloodline (later aided by the cardinal of Venice, Angelo Roncalli), this is mischief-making.

Also according to the book, present at the Last Supper was Mary Magdalene. You have to ask yourself is all this harmless fantasy?

Great play is made in the mention of the so-called apocryphal gospels.

The Gospel of Philip is one such historical book. It was not inspired. Nor the dubious Gospel of Nicodemus. Doubts also must be placed at the door of the Gospel of Thomas and others.

What the author does argue, and I agree with him is in his throwaway line “The Church had a deceitful and violent history,” Too true!

But what men touch with their stained hands, they desecrate and soil. This is true of all religions, mainstream or otherwise.

Get out of organized religion and into a relationship with Christ, has to be the order. You will not find God in any building (Acts 17:24); you need to seek Him with all of your heart and then trust in Him alone to save you.

And even Constantine comes in for some pretty heavy flak in page 314. This seems to be open season in character assassination of the court of Constantine.

But with the apocryphal gospel of Mary Magdalene inserted into the book, the plot settles in to place by page 333.

All Biblical credibility must now be questioned.

And if not, why not?

The Da Vinci Code is merely a super thriller in the genre of Ludlam and Forsythe. But to offer The Last Supper like ‘The Last Picture’ show does a disservice to our intelligence and to the skills of those thriller writers of intrigue and suspense.

I’m not sure about the reference to “Q.” This has long perplexed and puzzled liberal Biblical scholars, into asking who was “Q,” if he ever existed at all?

But surprise, surprise, according to the code, the author is no less than Jesus Himself!

For what reason, He kept a Galilean diary is not explained. Nor are we are let into the secret.

But what of modern theologians? What is their take on this controversial book?

The liberal scholar, John Dominic Crossan offers this comment about the book: “To say Jesus was married to Mary Magdalene is a putdown. History for historians is more fun than fiction. Fiction for me is like playing tennis without a net.”

So, though I am not a tennis aficionado I feel I must shout (I never did understand the complicated score system of tennis anyway.)

Today, the High Court in London ruled that Dan Brown was not guilty of plagiarising another heretical novel from the 1970s. This decision, which will cost the authors of Holy Blood and Holy Grail, $609,805.00 in court costs. Subsequently, this now allows the film, starring Tom Hanks and directed byHappy Days, Ron Howard to hit the cinemas this summer.

However, one might be forgiven for pondering the idea that this whole saga was a very carefully and well-planned publicity stunt, for the authors of Holy Blood andHoly Grail, only managed to sell 3,700 copies per year before suing Mr. Brown, yet once their legal proceedings had begun, sales rose to 7,000 copies per week and no doubt sales for both books will rise even higher, once the film opens and goes on DVD.

So, as the old saying goes, there’s no such thing as bad publicity.

For Mr. Brown of course!

I have to frown,

And ask is it just a load

Of warmed up codswallop

Written in the style of David Yallop?

If you want to be my literary man,

Don’t ever mess with the Bible,

Because that could be construed as libel!