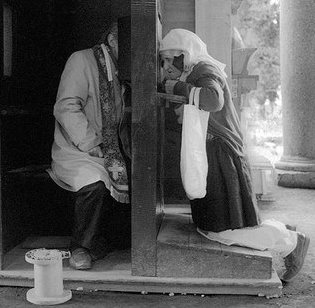 One of the reasons why former Catholics that are now saved, become such staunch defenders of the word of God, when it comes to being our final authority, is mainly down to the fact that for so many years, we were told how “holy mother church” was and is our “final authority” for the faithful Catholic, in all matters of “faith and practice.”

This kind of message is normally indoctrinated into the child during their Catholic education and of course, is reinforced by their parents, along with the parish priest.

However, for centuries and especially in Catholic Europe, a typical lay Catholic couldn’t read or write, let alone follow along in their Roman Missal, as the priest performed the Latin Tridentine Mass, with his back to the congregation.

For the lay Catholic to even dare question the priest and the Mass was considered “sacrilege.”

Therefore with the vast majority of lay Catholics being illiterate for centuries, the clergy quite happily became their interpreters, mediators, intercessors and spiritual “fathers,” and spoon-fed them their own dose of Romanism.

Scripture says that every man in his best state is vanity (Ps. 39:5), and with every person that has and ever lived, carrying Adams sin nature, only the new birth and God’s word could rescue man from tainted tradition and present him with the truth of Christ.

It was imperative therefore that the word of God be made available to all God fearing people, to enable them to grow and function according to what God said in His word and not what man said.

So in God’s perfect timing, He raised up imperfect men, ranging from Tyndale to Luther and guided and blessed their translation work, with some even paying with their lives by putting His word into the common man’s hand, in spite of everything that Rome did to thwart this, men and women got saved, dysfunctional families reunited, backslidden people were restored and illiteracy, especially in reformation countries, started to decrease.

This was the beginning of the great and long anticipated awakening. Once the papal shackles had final being destroyed, an entire generation of those that once lived in darkness, now witnessed and rejoiced in a new and perpetual life saving light.

So serious was this, the Lord said it was destroying the supremacy of the word of God.

Please see two such verses in the New Testament that speak about God’s loathing of tainted tradition:

“Then the Pharisees and scribes asked him, Why walk not thy disciples accordingto the tradition of the elders, but eat bread with unwashen hands? He answeredand said unto them, Well hath Esaias prophesied of you hypocrites, as it is written, This people honoureth me with their lips, but their heart is far from me. Howbeit invain do they worship me, teaching for doctrines the commandments of men. Forlaying aside the commandment of God, ye hold the tradition of men, as the washingof pots and cups: and many other such like things ye do. And he said unto them, Full well ye reject the commandment of God, that ye may keep your own tradition” (Mark 7:5-9.)

“Beware lest any man spoil you through philosophy and vain deceit, after thetradition of men, after the rudiments of the world, and not after Christ” (Col. 2:8.)

The briefed Catholic will respond and point to other verses that they claim affirm tradition to be acceptable:

“And there are also many other things which Jesus did, the which, if they should bewritten every one, I suppose that even the world itself could not contain the booksthat should be written. Amen” (John 21:25.)

“Therefore, brethren, stand fast, and hold the traditions which ye have been taught, whether by word, or our epistle” (2 Thess. 2:15.)

The latter of these two verses is very much a favourite for Catholic apologists, for they believe it gives their system of tradition running parallel with the Bible, and in some cases even superseding the Scripture, some form of credibility.

Yet in reality, all this verse is saying is that traditions were given orally to local assemblies before the entire New Testament was completed. Also anyone who is well grounded in the Holy Scripture, can see straight away that the Catholic churches traditions are so diametrically opposed to the word of God, i.e., purgatory, Mary, priestly celibacy, intercessors, lucrative statues and prayers to the dead, that the early church, which was predominately Jewish, would have had no interest whatsoever in the way in which the Catholic church severely corrupted the New Testaments teachings and plan of salvation.

Therefore, the tradition spoken of in 2 Thessalonians reinforces the word of God being one’s final authority, not tainted tradition, with unbiblical and heretical flaws.

Also in chapter 3:6, Paul warns his reader against “false tradition.” With such a serious alert as this, along with Galatians 1:6-9, one would have to conclude that the New Testament must be a timeless and perfect guide, to help steer people away from falling into this eternal damnation, otherwise, how would one be able to discern truth from tradition, fact from fiction?

And did not Paul encourage and even commend the Bereans, who checked the Old Testament diligently to see if what he said to them was true or not (Acts 17:11,12.)

With this in mind, any honest and open minded Catholic, including their priests, should be quite content and prepared for Bible believers to scrutinize their teachings to see if their system has any Biblical credibility or not.