We brought around 4000 tracts in three different languages and successfully distributed just under 3000.

Sister Helen kindly kept a mental diary of our time and activity in this very nice non-EU nation, and here it is for those wishing to get a fuller and more in-depth report of our 4-day outreach there.

It was early evening so we all went out to grab a bite and explore our new surroundings, when we came upon a small group of about 40-50 Communists, apparently Turkish Kurds, who had a small banner of Stalin and were demonstrating. Patrick felt moved to open-air preach a few minutes. He began to speak loudly, and we gave out no more than 3-4 tracts. There was dead silence as they listened (whether they could understand or not was unclear). A plainclothes police officer came over and told him he needed to stop, and he was led away by this man and another policeman. I panicked a bit because I couldn’t see where Patrick was taken, the others were at a distance, and I couldn’t speak French. Just then, the rest came by and I handed over the tracts. We saw Patrick toward the side with three police, who took his name and address and had a look at his passport. One spoke very good English, and Enrique translated for one of the others. James asked whether we were breaking any law, to which they said no, but that these people are not Christian and the government wished to avoid problems, so we needed to stop. They said we could go down the road and preach if we wished, but not where this group was. In my recollection, one of the three was much more standoffish, one was a bit more ambivalent and one was friendly. In the end, we said that was fine, that we were only wishing to preach the gospel, but that we were on our way for supper anyway and they let us leave peacefully. (We had no further problems with any of the police we saw during our stay.) 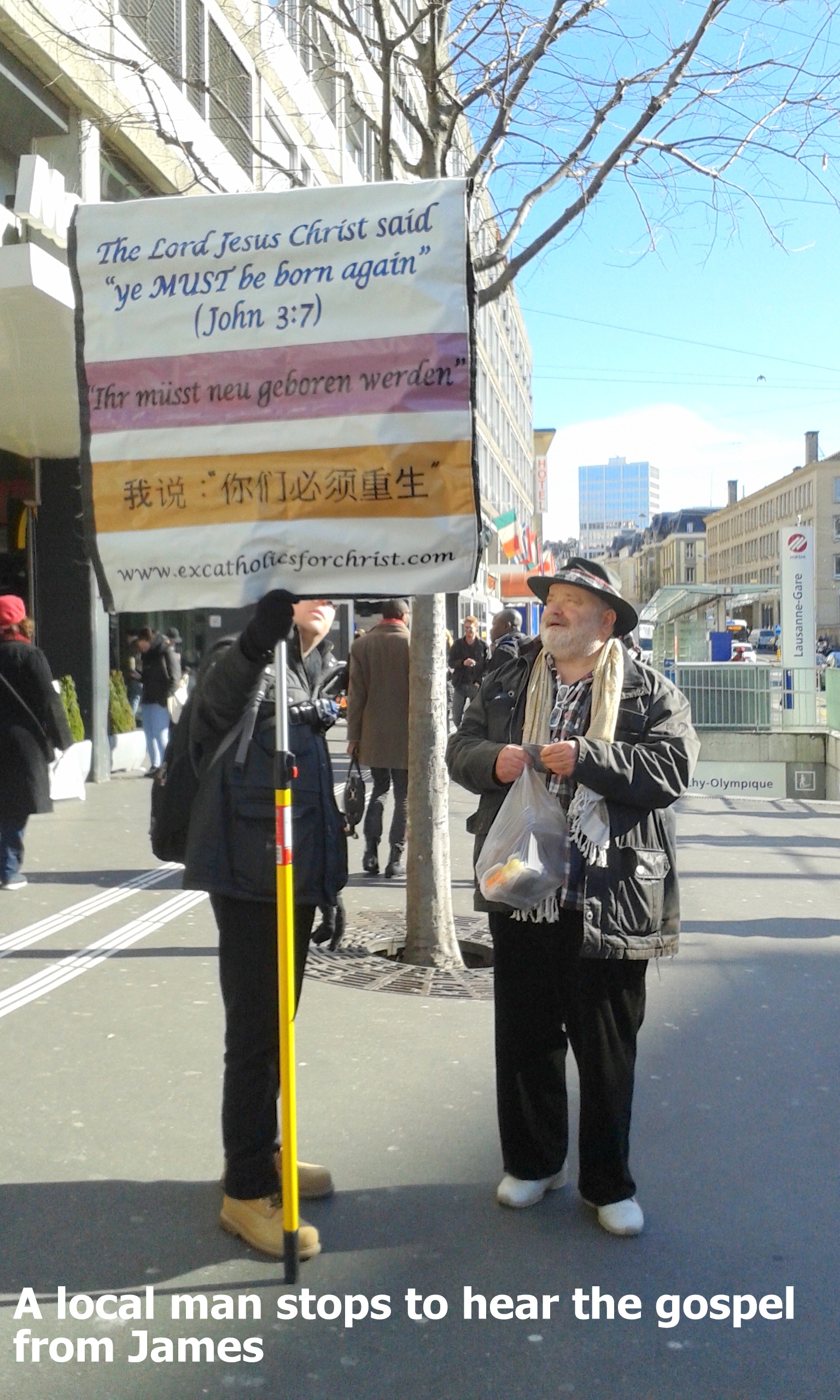 Patrick and Enrique started giving out tracts at the metro station at 7 am, and the others joined shortly afterwards. No conversations, but we did buy a Moldavian lady some food. Around 10:00 am we had a Bible study from 1 Corinthians 15, and then at 10:40 am we went out with the new banner toward the Martin Luther King church (situated in the centre of Lausanne), around where we passed out many tracts, despite the rain. There were a lot of people. I spoke briefly with a Jehovah’s Witness from South America. She began to argue the deity of Christ and left shortly afterwards. We left around 1 pm and went toward other parts of town with the multilingual banner up, but there were very few people around. We decided to drive to Montreux, but it was very windy and there was practically no one around, even near the shops. James got some good footage of the Alps and of the Leman Lake. We went back to the metro station in Lausanne from 5 to 7 pm. James had a very long conversation with a young woman who felt his tract was too negative. The Lord orchestrated the timing as James had gone to shoot some footage of the subway entrance and as he came up the stairs with the camera still on, she was there. They had a good conversation, she understood she was a sinner and she understood that Jesus was the One to pay for that, but she was not ready to submit. Meanwhile, I spoke with a couple of her friends; a young man in high school and another young woman. The man spoke very good English and was very interested in what I was saying; he was fed up with religion and all the manmade rules, said he was agnostic, knew he was a sinner, but wasn’t really sure how that could be dealt with or how the Bible could be true. I challenged him to read the Bible and to get on the Internet and read about the scientific evidence for creation, as I told him that there are many lies and misinformation being fed to students, as well as much missing information not being taught. The conversations were very friendly, and we were pleased at how well communication was going in this French-speaking area of the country. I also spoke with a young couple from Ecuador for about 10 mins. The young man admitted that, although he recognized he had committed thousands of sins and done many wicked things, he did not regret anything and believed that a person has only one life and should enjoy it while it lasts. He was challenged regarding the hereafter, but did not seem to consider it. He did take a Spanish tract. James helped three homeless men to pay for their overnight shelter. 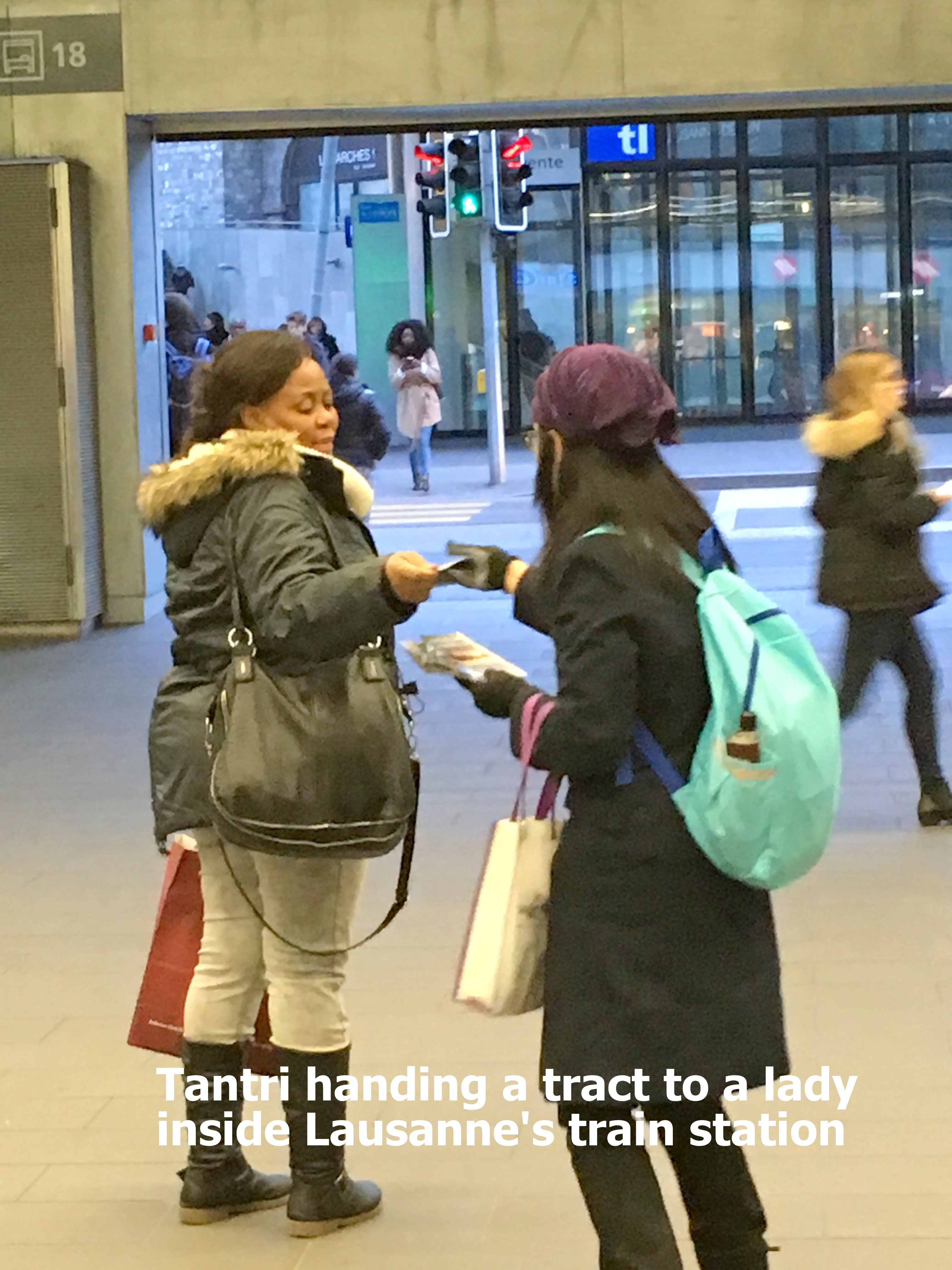 Tract distribution again outside Lausanne’s main train station from 7-9 am, Bible study at 10:00 am from 2 John. Then to Geneva: we had quite a lot of trouble getting to Geneva and finding John Calvin’s old church, the Cathedral of St. Peter (Saint-Pierre) in the old town. There were not many people, only a few tourists here and there, and we handed out a few to those we could, including a few English tracts (one to a Canadian woman who I spoke to for about 5 minutes). James taped a video inside and outside the 18th century neoclassical façade of the cathedral, originally a Catholic edifice of Gothic style, built in the 13th century, then used by Calvin when he was in Geneva. We again gave out tracts in Lausanne from 5-7 pm, during which time it began to rain and then hail for a short time.

Tract distribution again in Lausanne from 7-9 am, Bible study at 10:00 am from 3 John. We ruled out going to Bern, due to travel difficulties the previous day. We went out to the harbour at Ouchy Olympique with our tracts and banner, but there were only a handful of people despite the beautiful sunny weather, so we went by subway toward the main train station in Lausanne. There we were able to hand out many tracts as each train and subway arrived and had many great conversations. One was with a young girl who has been saved from a new age background only two years ago, is concerned about the spiritual condition of her city of Lausanne and hopes to see more street preaching, and took some tracts to distribute. James also spoke with an African gentleman who, although professing Christ, did not seem to understand the need to preach sin, hell and repentance and said our approach was too negative, and James spoke with several others too. Around 3 pm we left for the retail center again, put up the banner in front of the MLK centre, where Patrick preached briefly from the church steps. It was unclear to us whether this is now an ecumenical church or some kind of social centre. We spoke with a Swiss man of Spanish descent, who was fairly aggressive, demanding that I specify whether we were Catholic or Protestant and rather loudly proclaiming our ignorance about Biblical truth. Toward the end of our 10 min conversation, he was more gentle and friendly and accepted a French/German tract and a Spanish tract, and told us he would read them intently. During our tract distribution, an older man read the front of the tract, spoke a few choice vulgarities (thankfully, most were not understood), tore up the tract and threw it on the ground. Another also yelled in French about the tract, but most who accepted it were pleasant. James spoke for many minutes with a female “trainee pastor” who appeared to be backing a social gospel of some sort and was unable to articulate the gospel when James asked. Our last evening together saw us return to Lausanne’s main and very busy train station where we battled snow and sleet, and then we left for a final modest meal. One pleasant surprise was hearing ETC Radio loud and clear outside the restaurant! 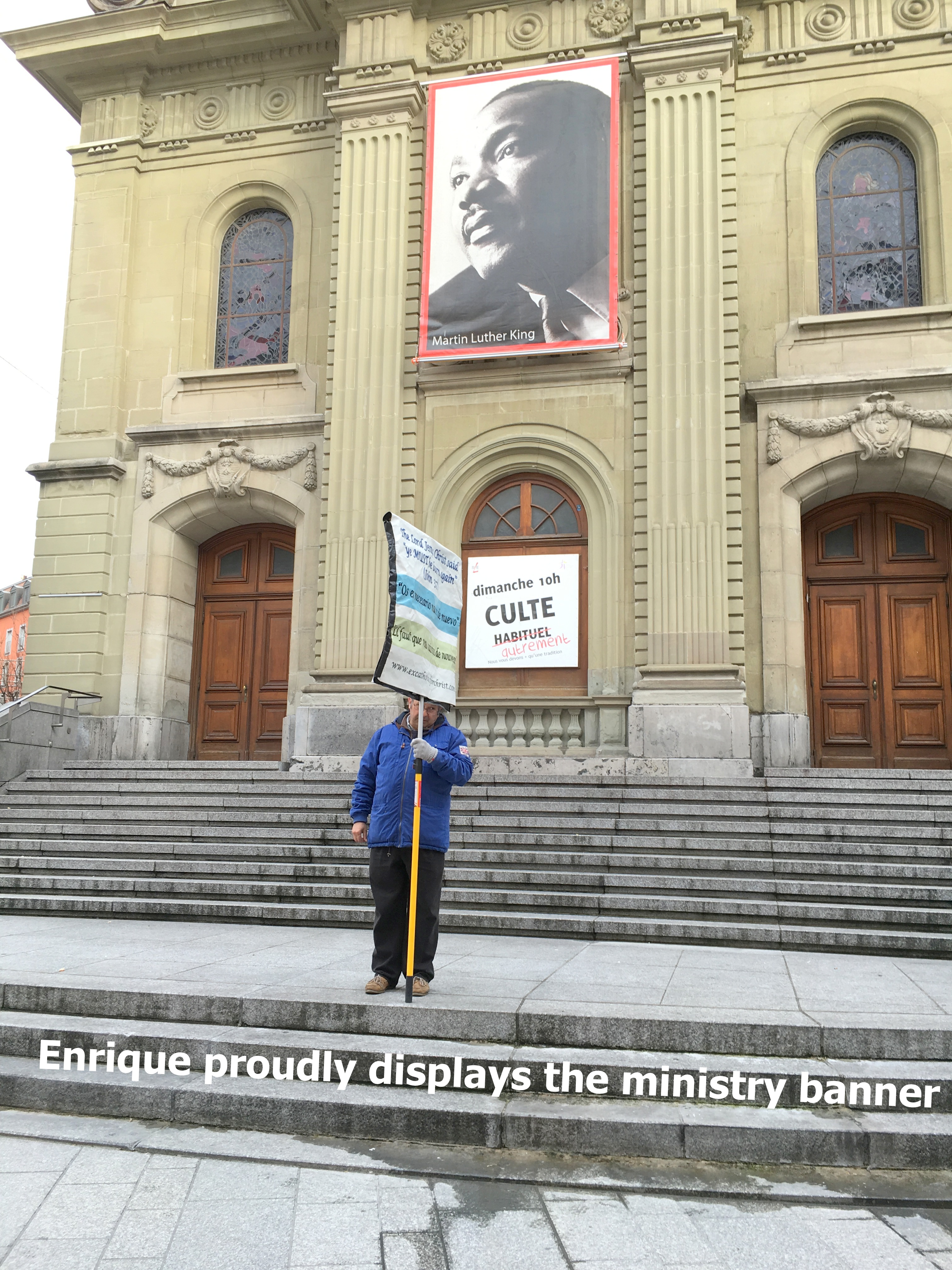 Tract distribution again at Lausanne train station from 7-9 am; at 9 on the dot, we gave out our last tract, Bible study at 10:00 am from Colossians 3. Temperature was 1ºC and dropping. Snow began to fall when we left the hotel and continued thickly the entire way to Geneva airport.

In summary, 2500 French-German tracts and approximately 100 Spanish tracts; 400 English tracts; multilingual banner seen by many people. Like many cities worldwide, Lausanne and Geneva are now multicultural locations and there are many African, Latin American, Middle Eastern and European tourists and residents all over the country. Most speak at least one other language, and the young people seem to have a very good grasp of oral and written English. 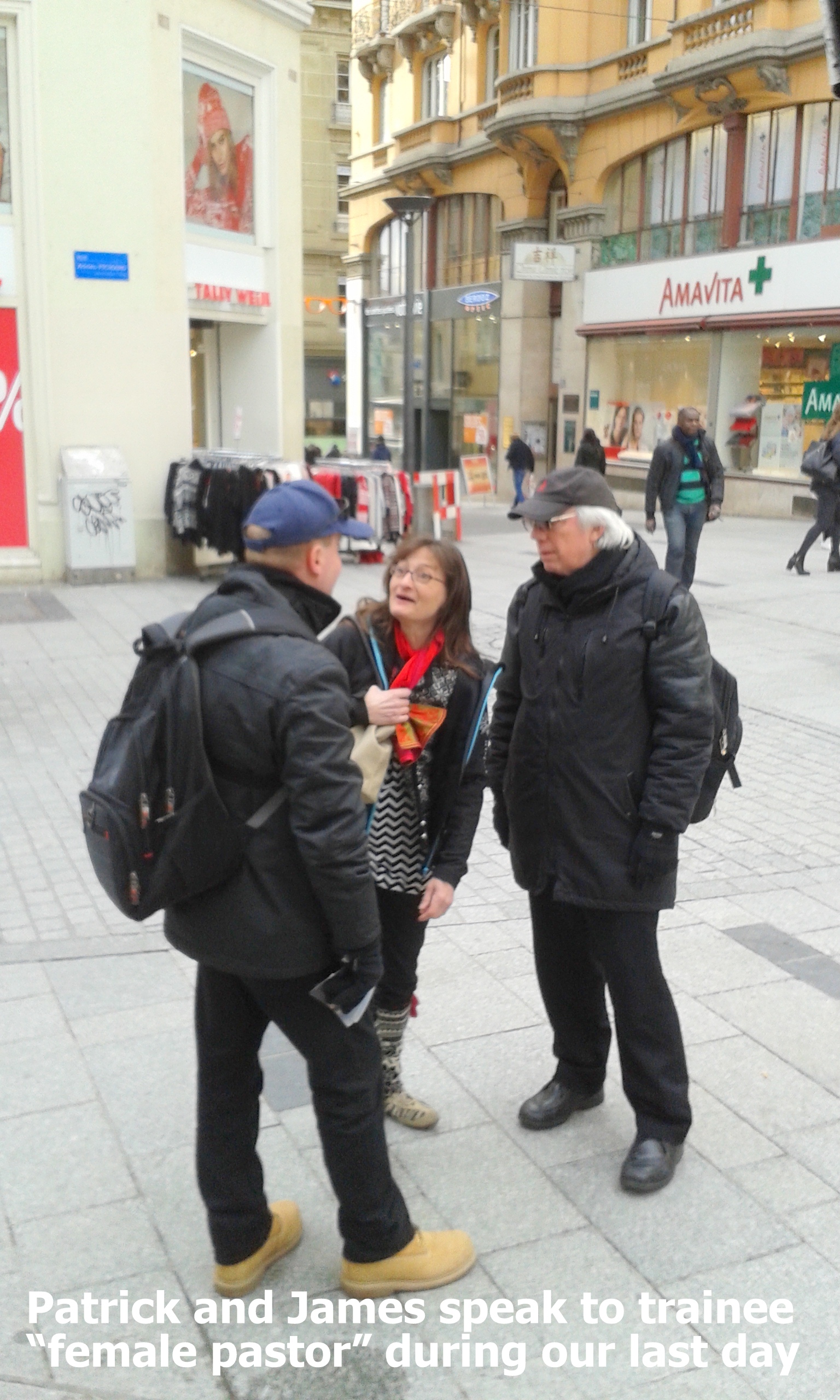 Our friends were able to successfully fly home to Spain after a two-hour delay due to more heavy snow, but our flight was cancelled, along with over a dozen others. In brief, our airline and their “customer services” team collapsed due to the strain of so many flights being cancelled, so we were told to return to the airport 24 hours later to resume our flight home. At some expense to us (having to pay for an unexpected additional night in Geneva), we were thankfully able to fly home the next night.

Our only serious glitch took place once all ministry activity was over. Praise God!