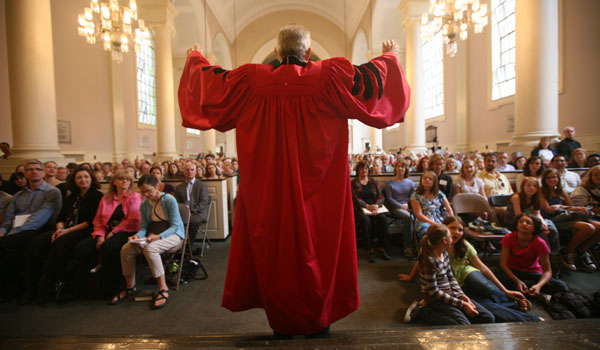 One of the hardest decisions a saved person will ever have to make is whether or not to go to a funeral of an unsaved relative or friend in an apostate church.

This month saw the sudden and tragic death of a sibling to one of our brother’s in the Lord. Like us, he is justifiably critical of organised religion, and therefore didn’t really need any persuading from us about what to do.

For the record, his sibling wasn’t saved, and the funeral took place in an Anglican church, carried out by a female vicar!

The only dilemma he faced was whether or not to go to the graveside and say a few words to those present before the coffin finally went into the ground. We were all of the same minds that this was something he could do (if he felt led to), and after a couple of restless nights, he finally plucked up the courage and made his way to the crematorium, and even managed to pass out tracts to family and friends (it’s always harder to do this inside a church), before quietly making his way home.

For anyone that doesn’t understand this predicament for a redeemed sinner, please allow me to explain.

Unless a person is actually born again, then they are lost. There is no point sitting through a religious service for an unsaved person, conducted by a priest or vicar (who is paid incidentally to do this) when the person who has just died didn’t even attend the church or any church in question. Such a service is an abomination.

In fact, for a vicar or priest to offer any prayers for the deceased (another abomination) seeing as they didn’t even know the person in the first place, is nothing short of blasphemy.

Only saved people should conduct Biblical funerals for saved people they personally knew. (Non-Christians shouldn’t be given Christian burials in churches either).

The thought of a saved person sitting and praying with unsaved people for an unsaved person is totally foreign to Scripture. In fact, for a saved person to even be at such an event in the first place is clearly seen as nothing short of condoning of this travesty.

The prayers from the clergy and those half-heartened replies from the pews are totally discarded by God. They don’t know God, and He doesn’t know them.

If a saved person attends a Catholic mass, for example, they are expected to stand, sit, kneel, and even pray to the saints and Mary. By their very presence and participation, they are crucifying Jesus afresh because the mass dictates this, and therefore many will go on to lose their testimonies!

But as far as an apostate protestant service is concerned, the vicar is simply telling those present what they actually want to hear not what the need to hear. The service is all about them. It’s humanistic through and through and designed to make them feel better about their loss. No gospel will be preached. No talk of holiness or repentance will be explained. No message about sin or the need for people to examine themselves in light of Holy Scripture. And no warning about eternal Hell for unbelievers.

After the service, the vicar will normally travel with the family of the deceased in the possession of cars and conclude the funeral at either the crematorium or graveside. Sometimes prayers or poems are offered before heading off to either the nearest pub or someone’s home to commence the wake.

Vicars are nearly always invited to attend, and many of them will. Food and alcohol are on tap, and with the rawness of just burying a friend or relative, alchohol is quickly consumed, and this is when problems arise.

On two separate occasions while my father and I were still babes in Christ, and not knowing any better, we naively attempted to preach the gospel to family and friends at an Anglican and Catholic funeral.

This isn’t something either of us would ever do again. Such “services” are arranged by the world for the world. The child of God has no mandate or business being there.

By all means, one should and must witness to family, friends, work-mates, and associates but the moment this takes on a religious connotation, we stand aside and have no part to play.

I would most certainly attend the graveside and say a few words, and even pass tracts out if I felt led to, but that is where I would personally draw the line.

Our brother made the right decision, and we totally salute him and others that have done likewise.

At times the true child of God will have to walk alone and suffer the reproaches of Christ outside the camp. Separation therefore is something all Bible beleivers should get used to when first saved, and continue until the Lord calls us home.

I will conclude this article with some verses to contemplate, should the reader one day also have to make this painful decision:

“And another of his disciples said unto him, Lord, suffer me first to go and bury my father. But Jesus said unto him, Follow me; and let the dead bury their dead” (Matt. 8:21-22).

“Be ye not unequally yoked together with unbelievers: for what fellowship hath righteousness with unrighteousness? and what communion hath light with darkness? And what concord hath Christ with Belial? or what part hath he that believeth with an infidel? And what agreement hath the temple of God with idols? for ye are the temple of the living God; as God hath said, I will dwell in them, and walk in them; and I will be their God, and they shall be my people. Wherefore come out from among them, and be ye separate, saith the Lord, and touch not the unclean thing; and I will receive you, And will be a Father unto you, and ye shall be my sons and daughters, saith the Lord Almighty” (2 Cor. 6:14-18).

“Ye adulterers and adulteresses, know ye not that the friendship of the world is enmity with God? whosoever therefore will be a friend of the world is the enemy of God” (James 4:4).