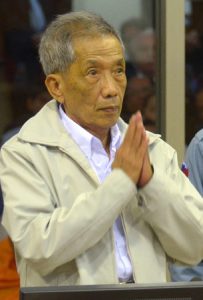 Former Pol Pot high executioner Kaing (Duch) Eav was sentenced to 39 years in jail for committing thousands of murders and rapes against his fellow countrymen and women. But it seems the 69-year-old now turned born-again Christian, requested to be “stoned to death” for his numerous crimes. This rather sounds Biblical to me, at least for Old Testament times. Maybe Duch had some Christianity taught to him long ago because he certainly didn’t learn this from any Marxist/Stalinist tripe. But if he is saved, then once again God gets all the glory.

An Italian bishop Marco Morosini has written to the Mafia objecting to them using ‘holy shrines’ for their Masonic initiation rites! Funny, I always thought the church turned a blind eye to much of those wicked deeds that have been carried out through the centuries.

The 1970’s pop group Boney M was told by their Palestinian pop concert organisers that they were not allowed to perform one of the biggest hits ‘Rivers Of Babylon’ during a gig at Ramallah this month. The band were somewhat perplexed by this unusual ‘request,’ for the Muslims living in “Palestine” don’t recognise ancient Israel’s claim to the land, and therefore Boney M buckled under the pressure. However, the Jewish conductor Andre Previn when conducting in Israel some years ago, called out to his audience if they would like to hear some Wagner. The overwhelming response was YES PLEASE, maestro!

The Queen and Prince Philip will make a 100-mile drive to welcome the pope to Scotland in September. But why Holyrood Palace, and yes I know it’s near the queen’s official residence but there are other castles in Scotland that could have been used? For the record, Holyrood House is a sinister building steeped in the occult and awash with innocent blood. So, is some covert alliance between the House of Windsor and the Vatican about to be sealed? And did you know this year is the anniversary of the birth of John Knox in 1510, and how he actually preached against catholic Mary Queen of Scots, for her catholic beliefs! Apparently, he even made her cry. I suspect if he lived today he might even cry in frustration himself at the pathetic state of affairs!

US serial killer “Son of Sam” finds God. Reports from the US say that the former mass murderer David Berkowitz who is serving six life sentences for his six murders from 1976‑1977 in New York, has apparently got saved. Similar to alleged reports of the mother of Baby P in the UK who also found salvation. If this too is correct then it once again reflects the infinite mercy and forgiveness of Almighty God. Jesus came for sinners not the righteous.

500 Abortions a day in the UK. Since 1967 over 6.1 million “legal” and state-funded abortions have occurred in the UK. Out of these 6 million murders, only 24,100, (0.4%), were actually done to help the mothers physical or mental well being. 97% of abortions are performed on healthy babies, while in certain circumstances no time limit exists in restricting the abortion of a fully developed pregnancy. Former Prime Minister Tony Blair not only consistently voted for abortion but much more deplorable, was how he voted for the abhorrent and appalling foetal craniotomy in Parliament. This practice involves crushing the baby’s head with forceps while still alive in the mother’s womb. In 1998, 69% of abortions were carried out on single women. In 1957 the number of abortions in the UK were 12,394, in 1986 there were 147,619 abortions. There were also 2,894 abortions for the year of 1986, conducted on girls under 16 years old! The UK has now overtaken the number of abortions that the US carries out each year!

French Burkha-Ban. The French parliament voted overwhelmingly to make it illegal for Muslim women to wear their burkas in public. Other European countries are likely to follow too. However, one French millionaire has offered a slush fund of 1 million Euros, to pay for any fines incurred on women that refuse to obey this law. In all honesty, the burkha is not essential to the Islamic religion and those that wear it are simply doing it to snub the country that they live it and their western values. In the UK, 93% of people polled for the television station, ITV said they hoped such a ban would come here. Those that are fighting to stop such a ban are the usual left wing atheist groups. One wonders if Islam would be so kind and tolerant to them if the shoe was on the other foot. The fact is Britain is not only a very “liberal” and all “intolerant” society, which on the suffice sounds fine, but in reality, they are buckling to Saudi Arabian fundamentalism and by refusing to follow the French’s bold lead, the UK will once again reap the whirlwind in years to come. UPDATE: A British Conservative Member of Parliament has been threatened with legal action if he refuses to see his female Muslim constituents while wearing the burka!

The European Court says there is no automatic recognition for homosexual marriage. In an amazing statement straight out of Europe’s highest court, homosexual “marriages” were not to be automatically recognised, and therefore it was up to each European nation whether or not to accept this or not. The UK has recognised “same-sex marriages,” since 2005. In fact, in the year 2006 alone, 15,000 “couples” had “married” since this ungodly legislation was passed. And yet, surprise, surprise, scores have since gone on to “divorce” already. (BBC News, 17/12/06).

Anglican Bishop of Manchester the Nigel McCulloch has apparently ‘apologised’ to a local group of fundamental homosexuals and lesbians for some of the Christian ‘persecution’ and ‘intolerance’ they’ve experienced from those that street preach in the city. McCulloch has also invited this group and others from their pressure group to a ‘service’ at the Cathedral to ‘celebrate their heritage.’ One of those that secured this ‘apology’ was apparently arrested by police for exposing himself in the street, in front of children no less. Does this apostate bishop wish to apologise for this too!!!