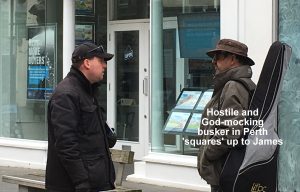 Towards the end of April/early May, we once again travelled from different parts of the globe, meeting in Edinburgh for a short outreach to preach the glorious gospel of the Lord Jesus Christ as best we can.

We weren’t sure what we would find. Scotland is known for its gray, cloudy, wet climate as well as its gorgeous scenery and its hardy people. It’s also become a trendy tourist spot, especially in cities such as Edinburgh where the natural surroundings and the cultural offering bring in holiday-goers from Europe and beyond.

As we notice in many places in England, the pagan roots of old England are again sprouting. The day we arrived, we took a brief walk through the city to look around and identify the best spots (pedestrian areas) for tracting. We immediately noticed the plethora of ghost tours, haunted houses and tour guides dressed in all sorts of eery costumes, plus shops full of Scottish whiskey, strange trinkets and odd books.

Apparently, this is a drawing card for the town. So sad, because people seem to have little notion that such topics are entirely off limits, as the Lord wishes to bless us and does not wish us to have any contact with the dark side.

Our first full day of outreach was spent in Glasgow, where we found the Buchanan train station in the middle of a long pedestrian promenade. (Apparently, George Buchanan was tutor to the young king-to-be James VI of Scotland/James I of England).

It was a remarkably sunny day and we found an unoccupied spot to put up the banner. Still, it didn’t take more than 20 or 30 seconds for someone to come over and complain to brother James, who had just taken his first bite of sandwich. Now, it is already hard to have to deal with a complainer on the street, but when your mouth is full, it’s even harder! This fellow was from a charity group and felt compelled to give him a rundown of the council regulations… even though we were in compliance. But he apparently wished us to move on. Conviction? Who knows… The Lord had other plans and sent someone (no idea of who he is or what he stands for) who defended brother James and told this chap we were doing nothing wrong and to let us be. From that moment on, we gave out a lot of tracts with no difficulty. It was the lunch hour, and the sunny weather was encouraging office workers, young mothers, tourists, students and older folks to be out and about for a stroll. Conversations were a bit hard, but there were tidbits here and there. 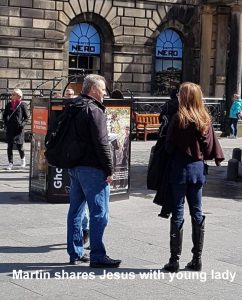 The next day was Saturday. Brother Martin joined us and we spent our time in Edinburgh, which was packed with tourists from many places in Europe (it was a long weekend), some speaking languages we do not know. Again, we were blessed with cloudless weather and had good reception of tracts.

One of the purposes of this trip to Edinburgh and Scotland was to catch a few of the history-rich spots along our path, with an aim to film short videos and to get footage for brother James’ upcoming article and video on King James I (born in Edinburgh Castle in 1566, later James VI of Scotland and James I of England). 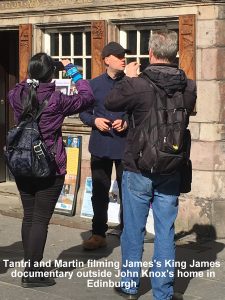 The Royal Mile in the city centre was a wonderful spot for our banner, for giving out tracts, and for speaking with people, and we also found the John Knox House along the way, where brother James taped some footage. John Knox was an important Scottish Calvinist reformer and political influencer. In fact, he spoke openly against both Roman Catholicism and Mary, Queen of Scots, for supporting its practices. Through his preaching, Knox had considerable influence during the early years of Protestantism in Scotland.

On Sunday, after our service, we went back to Edinburgh, as the huge crowds of people meant it was a worthwhile location. We had exceptional weather once again and stood at the same spot as before, where there was some kind of antique car show about to start. Quite an interesting experience to pass out tracts with old cars driving by, all to the aroma of petrol fumes! But the crowds made it worthwhile. 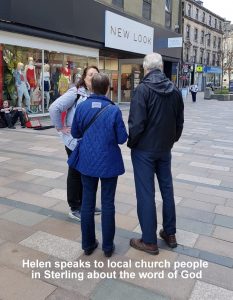 On Monday, we drove to Stirling, which has a centuries-old castle where King James was raised. Brother James was able to walk around the grounds and get more footage, and we soon all met in the pedestrian area of Stirling where the banner was seen by many. The day was pleasant and we found people rather agreeable to our presence. We met a young guy, Andrew, who said he goes around talking to people about the Lord, and we met an older couple later, who said that Stirling has some witness, but not much publicly. They did mention that Andrew’s testimony (he had quite an awful background) has apparently caused considerable buzz and curiosity among the town’s unsaved population.

Patrick spoke with a young fellow from Dunblane, the scene of a primary school shooting in 1996. This man apparently knew the gunman and was in another classroom when it happened. A hair-raising experience for a young child, I’m sure! I wonder… Has he had frequent thoughts about the Lord since? Does he wonder what will happen to him after death? Does he think about the brevity of life? He certainly was friendly to us, so perhaps. 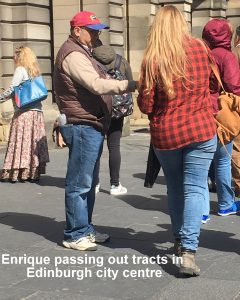 The best conversation was with the busker immediately opposite us. Now, you see, buskers are usually rather hostile as they are somewhat anti-system and feel we are encroaching on their space, but this young guy, John, was very friendly and asked for a tract. He wondered about whether there is a God or not and about the end times, and brother James had a nice conversation with him and encouraged him to get a Bible and also to have a look at the YouTube videos.

On Tuesday, we travelled to Perth, where both the weather and the reception were not nearly as warm as earlier. But we were undaunted. Several times, people came over and told us they were Christians and thanked us for the work. We met a young American missionary who said they do some outreach.

We met another lady who was also thankful, and we asked (as we often do) what kind of outreach is going on in the town. She told us that she and another lady do leafleting (letter-boxing) in Perth and the surroundings, and we certainly say bravo!

Brother James had a bit of run-in with another busker who shouted out “All religion is evil.” James replied, “Do you mean like communism? Do you mean like atheism? Do you mean like Fidel Castro, who killed millions of his own people? Do you mean Mao Tse Tung?” Thankfully, despite this fellow’s animosity toward God and his untenable advocacy of communist leaders, James kept his cool and then backed away, leaving the busker to his own thoughts. This fellow just wouldn’t give up, though, and his first song (invented on the spot just for us!) was a nauseating anti-God song, the kind that makes you wonder whether to laugh in disgust or weep for his soul.

We also met a fellow with a creationism t-shirt, and brother James and brother Patrick had a nice chat with him.
Our last day of outreach was spent in Edinburgh and Glasgow, first accompanied by pouring rain and with a brief stop at an longstanding Christian bookstore. We spoke with the shop lady, now in her 90s (!!!), who told us that Edinburgh is essentially dead spiritually and with little hope, but that at least a couple of younger men are trying to make a difference. 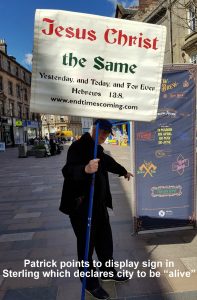 We echo this lady’s words as it regards Scotland. It is a wet and windswept area whose people have mostly forgotten their Christian roots and no longer seem to care about the Lord in any way. Virtually identical to the rest of Europe. But in any case, each and every one of us is called to keep preaching the gospel whenever we can, wherever we can, however we can, and to whomever, we can.

Overall, our outreach was short but sweet, even though we did not have quite the same number of exciting conversations as in our Bristol outreach in October. A disappointment? Not really, we have done what we could and what we needed to. The Lord is the one who will bring forth fruit.

Judging from our plentiful difficulties before, during and after the outreach, we know that Satan is enraged, but we also know that the blood of the Lord Jesus Christ will prevail. We are reminded of the apostle Paul’s (far worse) experience: “We are troubled on every side, yet not distressed; we are perplexed, but not in despair; Persecuted, but not forsaken; cast down, but not destroyed” (2 Corinthians 4:8-9).

We know that eternity will reveal the truth of God’s word in Isaiah 55:11: “So shall my word be that goeth forth out of my mouth: it shall not return unto me void, but it shall accomplish that which I please, and it shall prosper in the thing whereto I sent it.”

In keeping with the tradition of our previous reports, here are a few of the most interesting one-liners:

Several replies to the banner “Jesus Christ the same yesterday, and to day, and for ever”:
“He is indeed the same! He never changes”
“I don’t believe in God, sorry”
“Great! Good! Amen!”
“I’ve been trusting Jesus for 51 years” (with thumbs-up from an 80-year-old lady in Stirling)
“I agree!”
“Read your Bible, and you’ll know you’re doing something wrong!”
“What a load of nonsense!”

And to our offer: “Gospel tract?”
“No, no, no, no, no!!!!”
“Absolutely not!”
“Good question!” (in response to the “does God exist?” tract)
“I can’t take that” (giving it back; we thanked him for giving it back… someone else will receive it)
“Sorry, I think for myself!”
“I’m a Christian, keep doing what you’re doing” (we said keep it and pass it on, but they still declined)
“Sure, why not?”

And the most astonishing answer: “You gave me one yesterday in Stirling. I still have it in my bag. I’ll be sure to read it!” (we were in Perth, 45 min away). Wow, the Lord is seeking and reaching out to many. Now it’s up to the Holy Spirit to do His work and for them to heed it.

Thank you always for the prayers for this ministry. It’s the best thing you can do for us. Blessings and Maranatha!