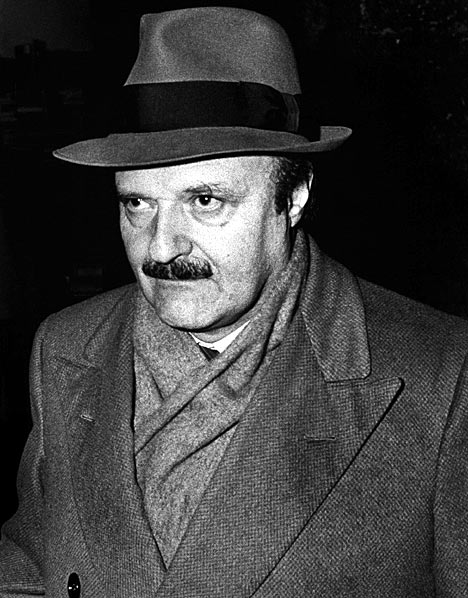 (Roberto Calvi before his suspicious death in London)

This title, for some, has all the hallmarks of an action-packed Hollywood blockbuster movie. However stranger things have happened, for if one has ever seen the film The Godfather III they will recall how the main plot of the movie was amazingly enough set in the late 1970s Vatican City.

During this film, a rich and influential Italian-American mafia family (the Corleones), are frantically trying to shift millions of dollars from a mafia account into the Vatican bank. All this must be done before the ailing pope dies. However, die he does, and the deal is off and in revenge for this, the mafia orders the assassination of the pope’s financial adviser (an Archbishop), who it turned out was playing both sides against the other.

There is no doubt that this film, which was based on Mario Puzo’s novel, has striking similarities to David Yallop’s much-acclaimed book, In God’s Name.

Yallop, in his book, mentions this film:

“Thus a film taking a highly glamorous and amoral look at the world of the Mafia produced enormous profits, some of which went to sustain Michele Sindona, financial adviser to the Mafia families Gambino and Inzerillo. They, in turn, were channelling the multi-million profits acquired largely from heroin dealing into Sindona’s banks. The circle was complete. Life was imitating art” (p. 187.)

Monsignor Montini was humiliated by Pius XII when he accidentally showed the pontiff a file that was not for his attention. Pius would say to sister Pascalina, “Take him into the next room and begin having him recite the alphabet” (La Popessa, p. 316.)

This much complex and ambitious man would one day become Pope Paul VI. However, Pius XII didn’t believe he had what if would take to make a strong and “decisive” pope.

According to Pascalina, Montini would carry with him, his own portable altar and Mass kit in a large briefcase. His followers labelled him ‘Jesus Christ’s Chairman of the Board’ (La Popessa, p. 363.)

It is reported, that Pope Paul VI was heard screaming on his deathbed, shortly before he died (B.R. Smith, Second Warning, p.120.)

(The death of Archbishop Macchi, aged 82 on April 6th 2006, might throw some light on the popular assumption that the liberal reformers of Vatican II removed the real Pope Paul VI. Sometime in the mid-1960s, Paul would be incarcerated in a prison or monastery until his death. Maybe in Italy, but who knows.

Apparently, the CIA took it seriously enough, calling for expert voice analysis and other personal features of pope Paul. And they had their doubts, it seems! But was a man put in his place or just an actor? It has been done before. Maybe with the death of Archbishop Macchi, who was Paul’s private secretary, some knowledge might come our way. If it does we on this website will get it out to you as soon as we know.)

Some would publicly utter: “Cardinal Luciani, was his only friend.”

So the hunt was now on to find a successor to replace this dithering pope (Paul agonised for three years about whether or not to implement the new mass.) Incredibly, due to the state that the Church was in at that time, someone thought a female Pope might not have been a bad idea, but this was impossible of course. After much deliberating and behind the scenes manoeuvring, Albino Luciani from Venice was voted the new Pope. He would interestingly enough choose to call himself John Paul I. This socialist, not to mention incredibly naive Pope, hadn’t even appeared on the shortlist nor had the bookies of the day even given him odds. England’s, Basil Hume, an outsider, was 25-1: the least most likely to succeed the dead Italian pontiff (he would only receive one solitary vote.

At the first vote, Luciani received 23 votes (one being from Karol Wojtyla.) Amazed and perplexed at this, the second round netted him 30 votes. By this stage, all the warring factions now needed to pull together, and with the help and intervention of Cardinal Koenig, the third ballot allotted Albino Luciani 68 votes. Yallop, whose book presents us with these interesting figures, believes that Luciani really didn’t want to be pope, but a humble parish priest (Yallop, p. 125.) At the 11th hour, the pressure was really on Luciani to be courageous and bold and accept the papacy – the final vote allotted him 99 votes. Albino Luciani was surprisingly, elected pope.

The new pope was asked the stock question that all new popes are asked:

“Do you accept your canonical election as supreme pontiff?” ‘Eventually, he responded,’ “May God forgive you for what you have done in my regard. I accept.” (Yallop, p.126-127.)

This shell-shocked smiling pontiff would be dead on 29th September 1978 at 4.30 am, by an alleged poisoning (something not known since Pius VIII), with an expression of agony on his face.

Sister Vincenza, the pope’s personal aide of many years, discovered his body. She summoned Cardinal Villot (Rosicrucian and member of the Masonic P2 Lodge.) Yet only 12 hours earlier, Villot had been sacked by the pope as Secretary of State.

Soon on the scene and according to Yallop, the prelate removed Luciani’s slippers, his detailed notes about major changes to the church, a medicine bottle (for his low blood pressure), glasses and his last Will.

By 6:00 am, less than 90 mins after he was found dead, the entire 19 rooms of the papal office were totally bereft of anything remotely associated with the papacy of Luciani (Yallop, p. 324.) All his key staff members were soon to be packed up and shipped out of the Vatican to far and remote parts of Italy. Eventually, the Vatican summed his doctor and then notified his family of the pontiff’s death. Then at 7:27 am, Vatican radio announced the death to the world.

Dr Buzzonetti stated that he died of a heart attack at 11:00 pm, the night before, even though no autopsy had yet been performed. This would later be rejected by the Signoracci brothers, who stated that from the lack of rigour mortise and the temperature of the body that death had taken place, not at 11:00 pm on the 28th but between 4:00 am and 5:00 am on the 29th.

Monsignor Noe (now a Cardinal) would also affirm the professor’s findings (Yallop, p 325.) However, after much intense pressure, an autopsy was performed on Luciani, but this was hushed up for fears on its devastating conclusion (Yallop, p. 341) and then he was embalmed in the Vatican.

The Vatican’s disinformation department circulated rumours as to the cause of the pontiff’s death. They suggested that John Paul had taken too much medication, but Luciani’s doctors hotly disputed this by saying he was very careful with his medication and that the dosage he took was very minimal. The Vatican also wanted to put out that John Paul had been in poor health, but his own brother, close friends, fellow priests, confidantes and even his own personal doctor, sharply disputed and rejected such false claims.

Vatican insiders and others, who take a keen interest in their affairs, have long suggested murder. Why some might ask? Because John Paul I wanted to clear out over 114 well known high ranking Freemasons (the vast majority being Cardinals), then he would restack the decks, sweep clean the deadwood, sell off all Vatican treasures and try and regain control of his church and what was left of its battered integrity, after the Marcinkus scandal (Yallop, p. 23.)

Amazingly, according to Yallop, on the day when John Paul was laid in state, people who had come to pay their respects, were heard saying: “Who has done this to you? Who has murdered you?” (p. 321.)

What makes this allegation even more plausible and sinister is the amount of time that lapsed from his inauguration to his death 33 days. Please keep in mind that Freemasonry has 33 degrees to its secret and occultist religion. Do not be fooled, this is NO coincidence. This pope’s death is believed by many, to have been carefully planned and carried out by dark figures within the hierarchy of the Vatican; for nobody else would have been able to get near enough to him, to murder him! It is also baffling that no autopsy was ever publicly performed on John Paul, nor the time or reason for his death has ever been investigated or made public!

So who are the main suspects for this most serious allegation?

Calvi would later be murdered (not suicide) under Blackfriars Bridge in London. Patrick still remembers the tense and bleak atmosphere that hung over the dark damp rail of the bridge. Calvi’s style of death was a Masonic form of punishment.

(Interestingly enough the City of London Coroner, Dr David Paul, was my father’s GP in South London in the mid-1960s, and once shared a billet with Prince Philip, during their naval days in World War II.) 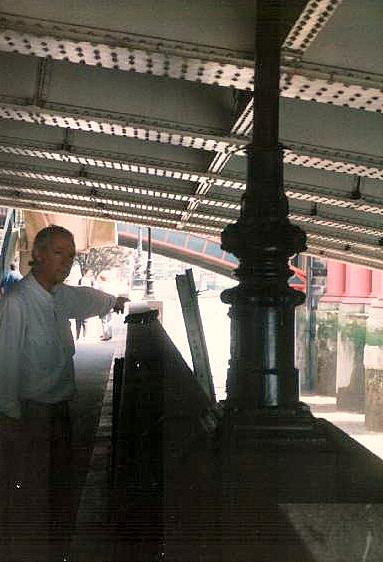 (Patrick points to the very spot when Calvi “died.” Little has changed)

Also worthy of noting was Calvi’s false passport (Nicaraguan), which had a Masonic symbol in the centre that was shown on Italian television in the 1990s.

(Incidentally, during this highly unusual period close associates of Calvi also met premature and convenient deaths, with his life long secretary of 30 years, apparently throwing herself out of a window to her death and another associate being shot.) 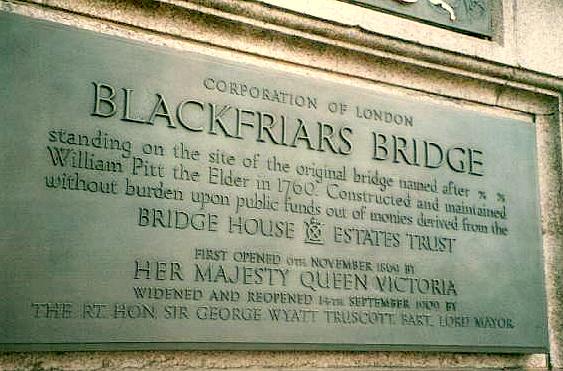 Regrettably, for the family of Calvi, this pope (and the last one) have taken no action against any of these assailants (at least those who are still alive.) 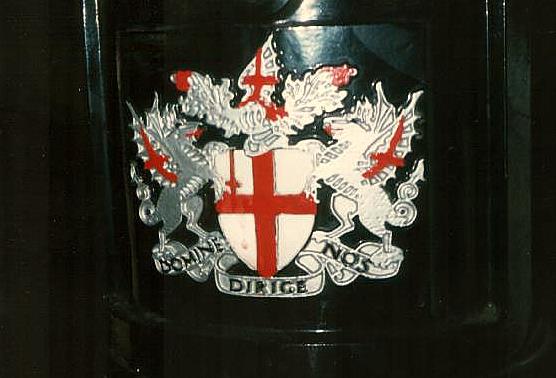 Update: October 13th, 2012. In his book Body of Evidence, Professor of forensic medicine, Dr David Bowen, said [It was] “taken in one twelve-hour sitting, with just an hour’s break for lunch.” How strange and what was the rush for a verdict to arrive so quickly at suicide. Naturally, the more influential Italian daily papers were scandalized by the speed and verdict of it all. I’m not surprised either.

All very unusual and one can only speculate why this was fast-tracked at all.

Also more concerning for the family still grieving over Calvi’s death, the professor also noted, “that no evidence of brick dust was found on his hands even though bricks had been placed in his jacket (by someone) and trouser pockets. In addition portions of Calvi’s clothing and body fragments, including pieces of intestine, tongue, and parts of the neck were found later in the Milan Institute of forensic Medicine, presumably relics (if you can call them that) of the exhumation procedures.” One can only wonder how they journeyed from London to Milan and for what purpose. All very gruesome, and especially for the family still traumatised by this 30-year-old mystery, that may never be solved.