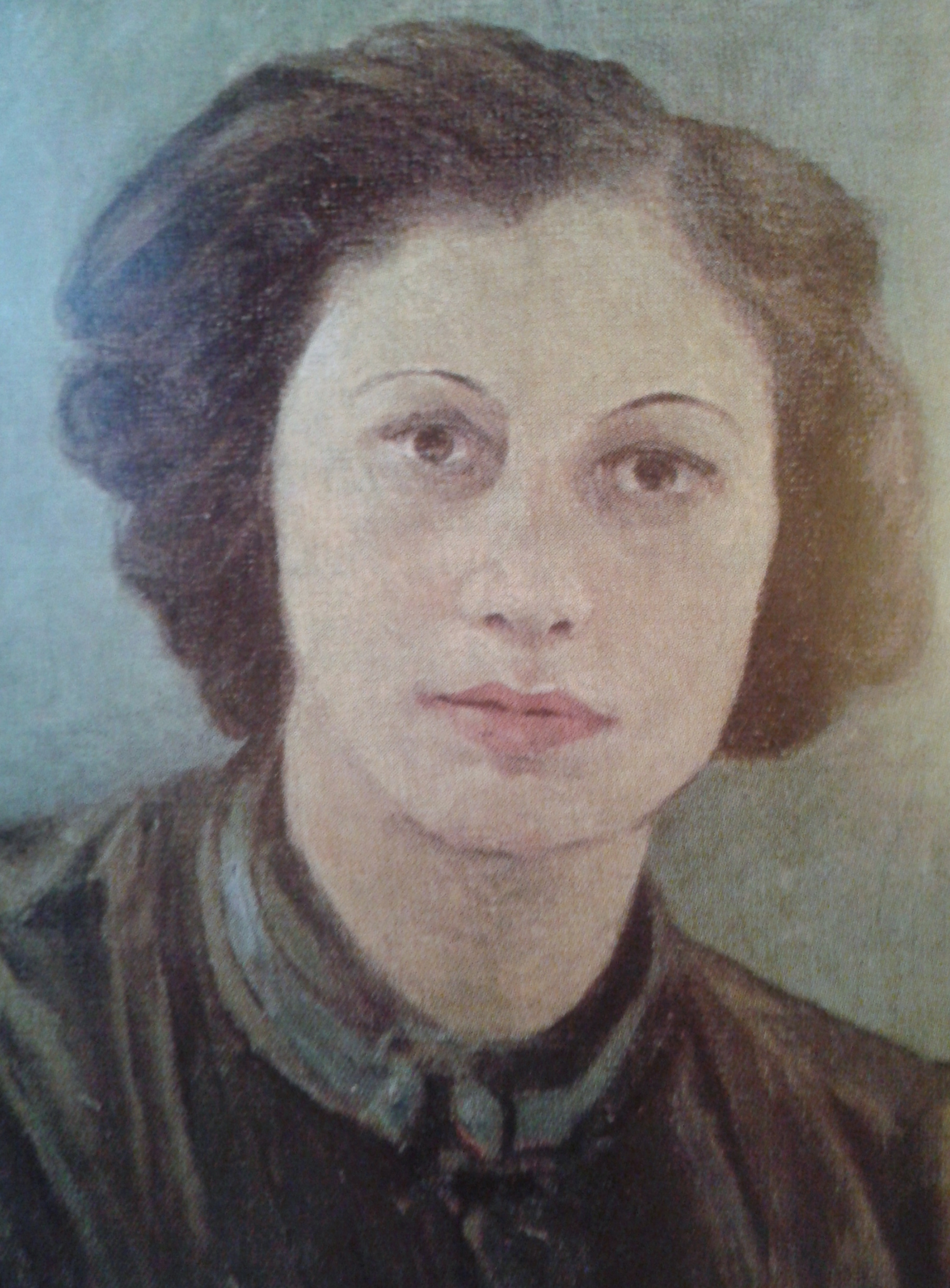 I first came across the courageous story of Princess Noor when I stumbled across the book The Spy Princess, by Mrs Shrabni Basu, so much so that after reading it I was moved to compose a short selection of music, illustrating her short life.

It’s taken, surprisingly, seven decades but the end result is a lasting memory to her name, and incidentally Noor’s family lived just around the corner, and she frequently it seems visited the square when she was in London, even before her flight to France, sadly she would never to return to see its green lawns and privet hedges. So the chosen location is very fitting.

Noor Inayat Khan is unique in that she was the first woman agent to be sent to France during the War, and at one time in Paris soon after her cell had been penetrated by the enemy, she alone was sending important messages to London of important troop movements.

Noor was born in 1914 and was always a sensitive child who excelled in music and writing, and in fact her book Twenty Jakata tales, published in 1939, still remains in print today.

With the fall of France in 1940 the Noor family, then living in Paris, left immediately for the safety and calm of England. Also then in London was General DeGaulle, the leader of “the Free French Forces” and I suspect his stirring words to all French people encouraged her to enlist in 1940.

She would later be noticed and recruited by the SOE for future training and indeed her knowledge of Paris, as well as her bilingual skills, would be of great advantage to the SOE.

There seems to have been doubts by her superiors’ of her suitability to qualify as an enemy agent during those basic training days, yet she persevered and was eventually accepted to be later commissioned and sent to France by air. One of her officers then wrote about her saying:

“She never for one moment doubted she could do the job..it was by her own wish that she was sent to work in the Paris area, the most dangerous in France.”

A description of her at the time records that she was 5’2 inches and weighed 7-stone, hardly the image of a spy, even today. (Her code name was “Madeline.”)

Noor had come from a Sufi/Islamic background so I found it interesting that during her period of training of wireless transmitting, cypher reading, and familiarity with firearms, she lists on her application form the religion of “the Church of England.” I do wonder why.

I have to suggest here that perhaps for the first time in her life she became aware of the Gospel of the Lord Jesus Christ as preached in the Holy Bible.

This may have been God’s intention to bring her to the knowledge of the saving grace of His Son, Jesus Christ.

We at this ministry believe with conviction that only “Christ is the light of the world,” and that this intense light can penetrate any prison cell walls or world religions. All things are possible with God.

Noor arrived in France by Lysander aircraft in August of 1943 and one of her fellow agents remembered her by saying: “She was very young but I always had the confidence that if she were captured she would not speak, and never had any anxiety on this score.” And it seems his judgment was correct because after being betrayed, Noor during a desperate fight was arrested and taken to 84 Avenue Foch in Paris, the then home of the SD and the Gestapo. The building is still there today and for further information about its history, please see my article on Oddette Churchill.

Noor would remain a prisoner at the Avenue Foch for five weeks and seems to have been fairly well treated, even at one time asking her interrogator for the use of a hot bath! She also requested and was supplied with paper and pencils. Later she attempted on two occasions to escape but was recaptured. This would result with the threat of her being shot and experiencing some assaults on her body. But she never betrayed any other agents.

After these fiascos in Paris and to the embarrassment of her interrogators Noor with others was dispatched to a prison at Pforzheim in Germany, near the Black Forest. Noor was the first political prisoner it seems to arrive there on November 27th 1943. Now she would be classed as a dangerous prisoner and for her, the treatment would only get worse.

Noor according to her biographer Mrs Basu was treated in accordance with the Nazi decree of, “Night and Fog-return not required. It was the expression used for people who disappeared,” she writes in her book.

Now Noor would be confined in an underground cell chained to the floor by her wrists and feet. Starvation rations would be issued to her, these being potato peels and weak vegetable soup.

“She was to have no visitors. Her door was never opened, except when the warden visited.”

She was to spend ten months in these cruel conditions. Once when she noticed a passing prisoner, she whispered: “Think of me I am very unhappy.” She may have said more but it is not recorded.

Her loneliness must have been intense and her suffering and torment now almost unbearable for her to maintain alone in that cold cell, which must have brought her close to suicide at times. Although I don’t think she attempted it.

Yet her first biographer, Jean Overton Fuller in her book published in 1952, was able to speak to the Governor of the prison when she interviewed him in 1950. It seems he had been sympathetic to Noor and was shocked by her treatment from the Nazis.

On page 244 of her book, she writes: “When she first arrived [at the prison] it was obvious that she was having a great spiritual struggle…as time passed she became calmer,” remembered the Governor of Noor’s state of mind.

I like to think and hope that perhaps some of the words of the Gospels that she would have heard, perhaps for the first time every Sunday when she attended those Anglican church services (the Church of England was a different church then and not a member of the false ecumenical system it has become today) had made a lasting difference to her beliefs.

God has a plan for everyone although most will not listen to Him or seek to know more of His Kingdom.

Yet Noor’s final days were numbered at Pforzheim. Now she was to be taken to Dachau Concentration Camp for execution. But first, she would be cruelly subjected to beatings, rape, and assaults by sadistic Nazi soldiers.

One man remembered that “she looked much like a Creole.” It was a long-suffering night that Noor endured and was only brought to a lasting conclusion when as “a bloody mess” she was ordered to kneel before her executioner, who then placed his pistol against her head and murdered her.

There is still some doubt about what occurred next but it seems her bruised body was dragged to the heated crematorium, and with others, she was executed in the boiler room. Then feet first her body was thrown into the flaming furnace. Certainly a picture of Hell! 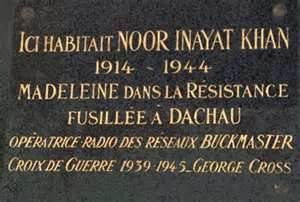 Through it all, she may well have been still alive when this happened. Some of the evidence seems to suggest that she was conscious when the furnace doors were opened by her torturers. We cannot know or ever will learn the truth of what happened to Noor in those last minutes of her life, but I like to speculate that the comforting words of the 23 Psalm:

“The Lord is my Shepherd, I shall not want,” entered her mind and remained with her, and that she may even have whispered them silently to herself as the pain on her body was being inflicted.

I certainly suggest she must have heard and got to know this Pslam and other parts of the Scripture, during those church services she had attended. And from her bloodied lips we are told the word ‘Liberte’ was also heard.

Princess Noor the Spy Princess has waited too long for this memorial to be unveiled in her honour in London.

In conclusion, we cannot know for sure what happened to this defiant woman in the last months of her life.

In John 3:3 the Holy Bible informs us that, “Except a man be born again, he cannot see the Kingdom of God.” I like to think and do believe that Noor Inayat Khan has witnessed the coming Kingdom and rejoiced in its vision. 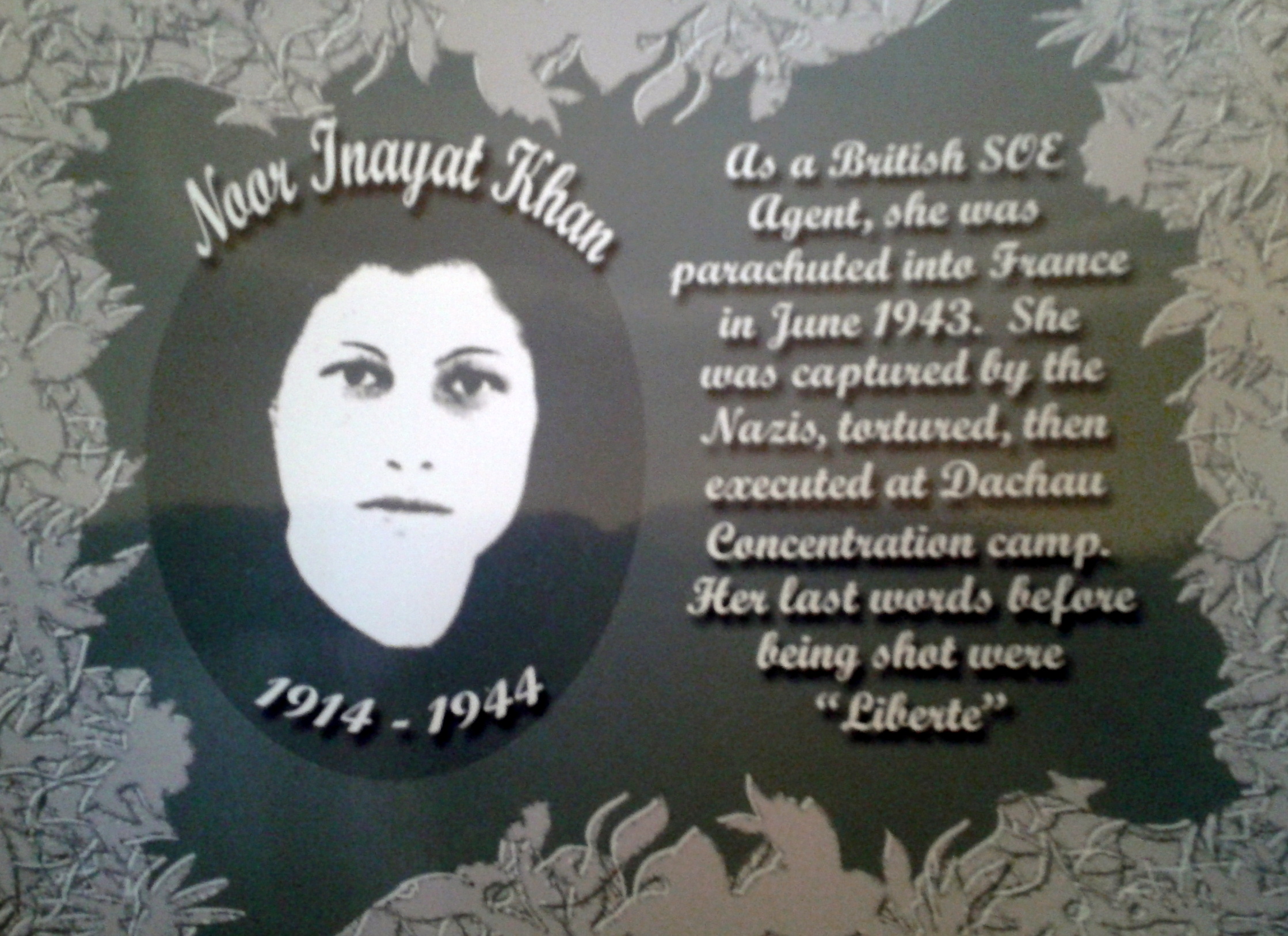 “It is appointed unto men once to die but after this the judgment.”

I journeyed down to London to inspect the newly erected Princess Noor Inayat Khan statue in Gordon Square.

I found its location very quickly and my first impression of it is good, however after studying it and taking pictures from most angles, it did not seem to correspond with the images I had seen of her in books and articles in the past. This time she looked older, perhaps wiser, and more serene. Maybe this was how she perhaps might have looked if she had survived the war, coming home to resume her studies. 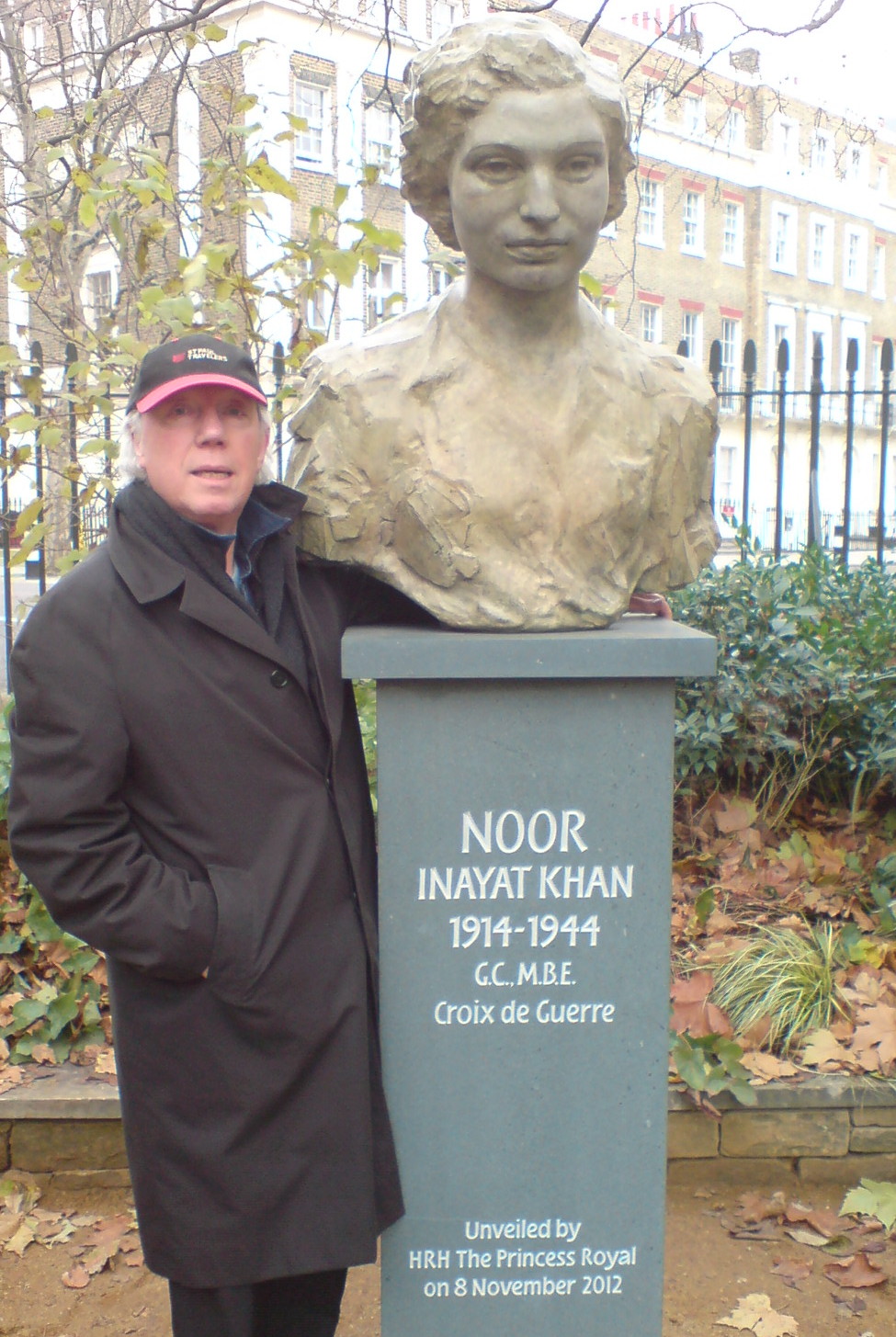 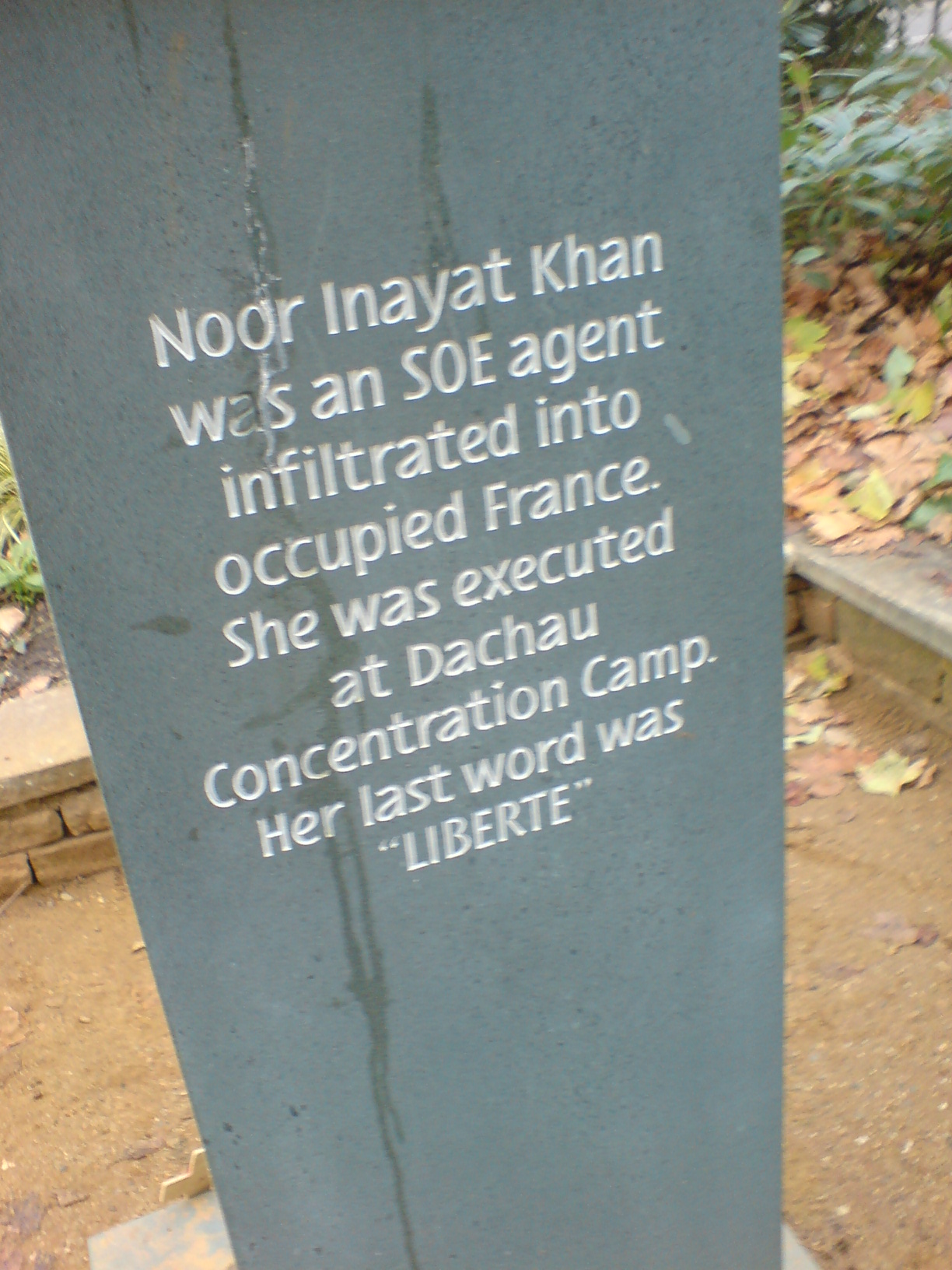 I was also fortunate to have been given permission to photograph the house she lived in with her family, just around the corner from the Sq. in Taviton Street, and to take some pictures of the hallway of this imposing house that her family occupied during the war, incidentally today it’s part of the University complex. 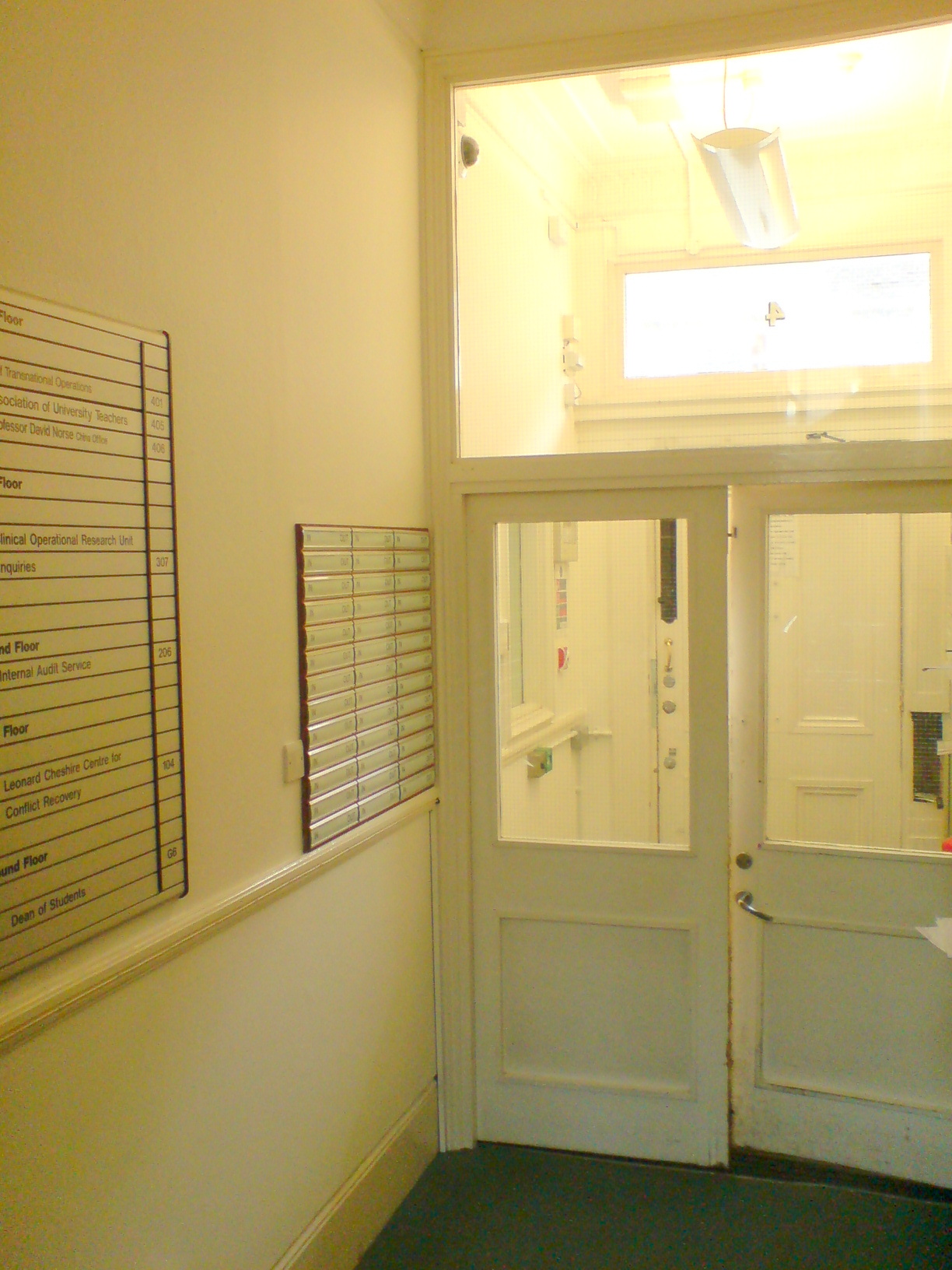 As I stood at the front door I turned and imagined a young Noor in her uniform that she was so proud to wear, taking a final glance of the hallway and with its imposing ascending staircase, and wondering if she would ever see it again. It would, of course, be her final memory before journeying to France as an SOE agent. 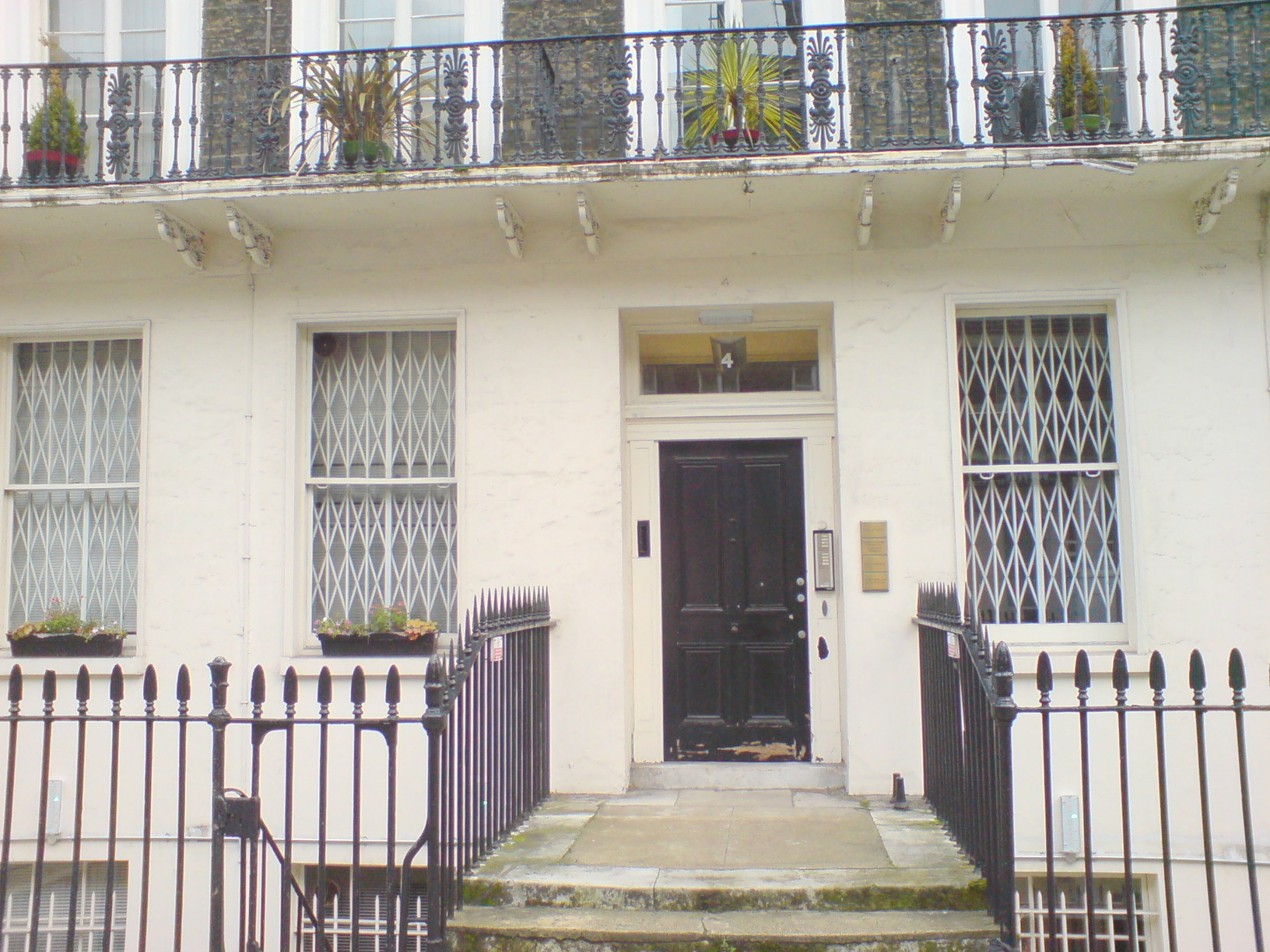 And maybe in those final days in Dachau, she would dream many times of returning home and opening the front door of number 4, Taviton St, London. 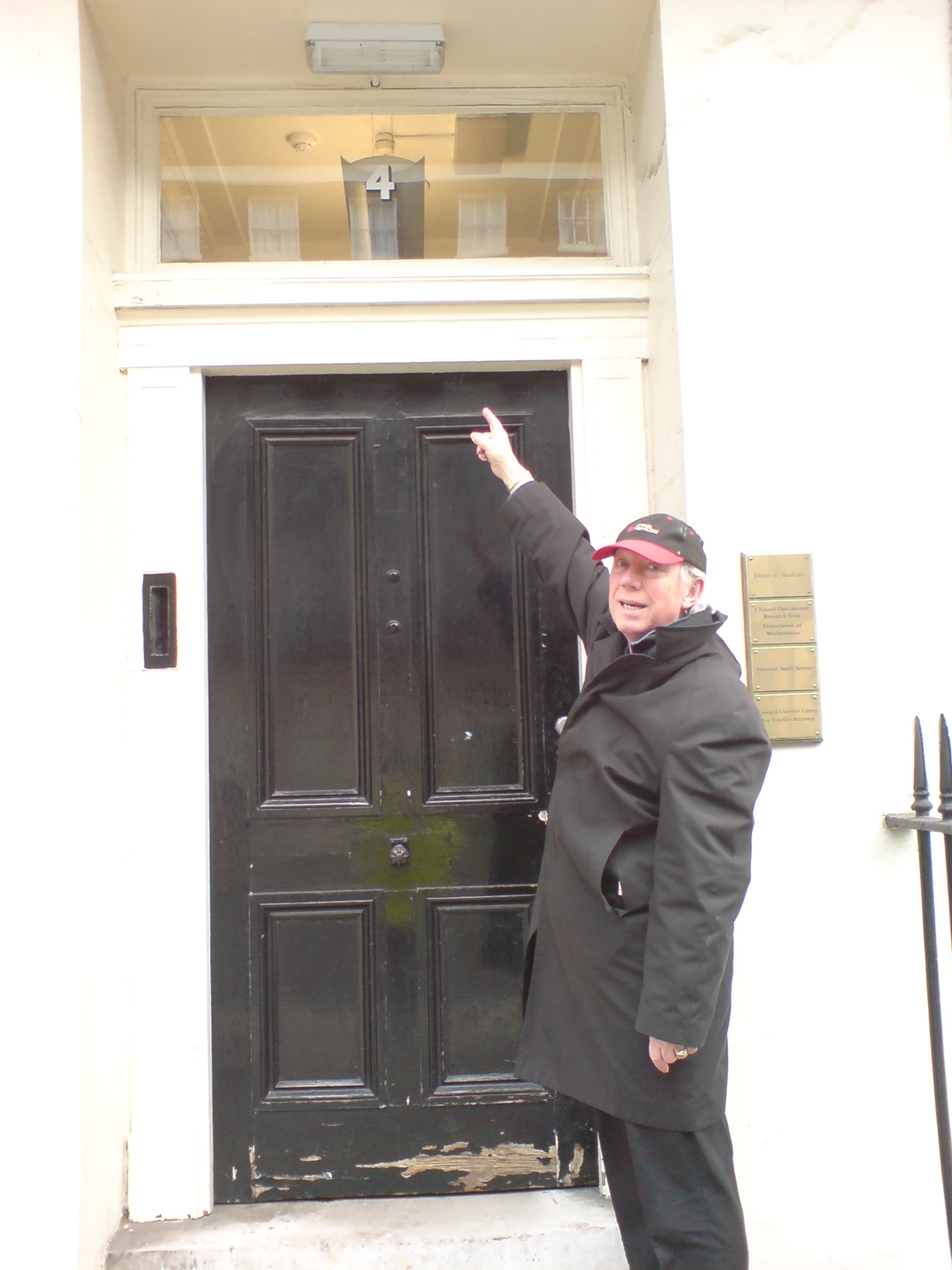 In conclusion, Noor could never have imagined that the Sq. she so often visited and enjoyed would one day be graced by a statue of herself, situated on a marble plinth adorned at the base with flowers and poppies. 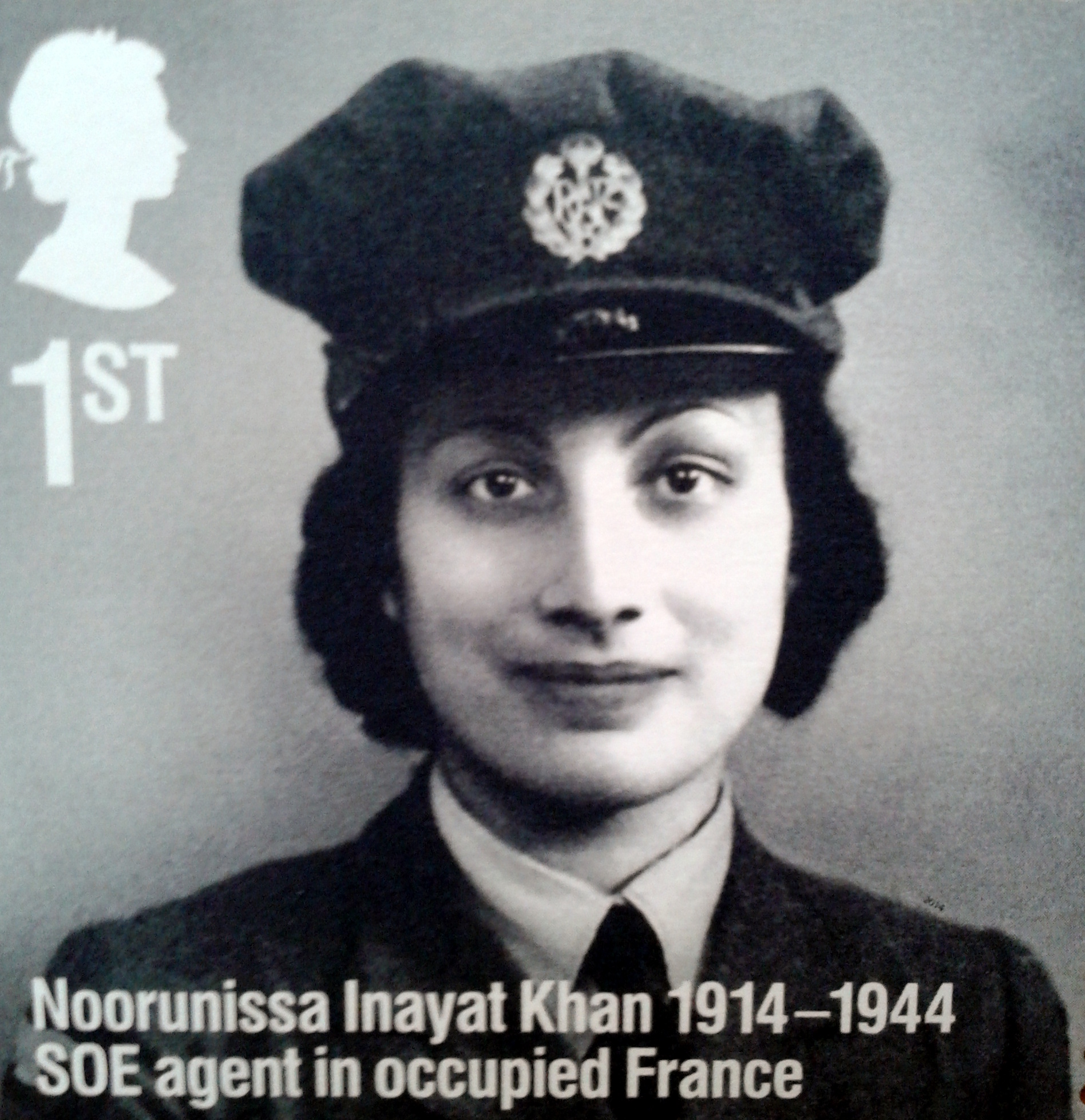