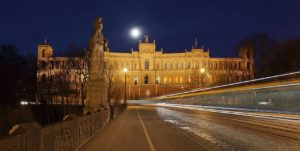 My mother and sister were both of course anxiously waiting and very concerned at the open door of our cottage when I arrived home. Excited but still very confused about what had just happened. I just walked inside past them without a word and sat down by the empty grate on an upturned wooden box. Still very much astonished by what had just happened and that I was also somehow involved with it as well.

Later that morning I helped my mother with our important family vegetable patch. My sister, as usual, just watched with disinterest. It wasn’t a chore I ever particularly cared about but I would not nor could not let my mother toil on her own. But a bountiful future seasonal crop meant the difference between starving or just surviving for our little family. Strangely enough, I had noticed many times whilst reluctantly performing my garden duties that however much those weeds in the vegetable patch were weeded and discarded, they always later somehow seemed to grow back above the soil before the expected vegetables were ready for the picking. But even then, as I worked my wondering juvenile mind just kept thinking about what the brother and the lady were now discussing or perhaps preparing for us all in the village for the future. The brother had earlier confided to me that this fortuitous visit from the lady might be – he fervently hoped – could only greatly benefit our village and all of us as villagers’ as well and then in the future if possible. And true to his rather cautious prediction most of our lives did indeed change in the village soon after. But not as we expected!

Several days later I summoned up the courage to approach him about that unexpected visit from lady Louisa. He prepared his reply with a kind patient smile and gently sat me down by the hearth. His face now being softened from his usual grave concerned sometimes tired appearance. And the fire from the coals fashioned his face somehow into the image of an aged Venetian Doge lord. (Their many depicted images I would happily encounter many years later whilst being domiciled there myself in that delightful city of the water, that then boasted over 17 miles of mysterious waterways. Absolutely amazing)!

And for a brief few months many years later I lived whilst employed in the establishment owned previously by the great composer Antonio Vivaldi and on any windy wet night, if I placed my ear against the walls with an empty glass, I could swear I could hear music from his famous “Four Seasons” being played. Or maybe it was just the worn ancient ivory organ stops from the old abandoned church next door just reverberating through the pipes. Who knows? But I did think: “Which movement was it … do you remember?” Karen suddenly enquired by rudely interrupting him. She was always the concerned musician in her musical tastes.

“Well … autumn I suppose … I’m pretty sure” he replied after a slight hesitation, but he wasn’t really certain. Simply because he had little interest or concern in music.

“Ah, my favourite” she answered with a contented sigh is “L’autunno. It’s so atmospheric. I love it.”

Suddenly Carin interjected excitedly saying: “Oh I know Venice so very well … both Hermann and I lived there you know in 1924 … Oh, we  were so very happy there … here I have a photo.”

She reached quickly for her faithful ‘Holtzman Handbag’ – and always placed with her by her side – then patiently rummaged among its assorted contents. Then finally produced a creased photograph for his inspection (see picture). It clearly showed the couple happily feeding the always greedy peckish pigeons in St. Mark’s crowded tourist square. 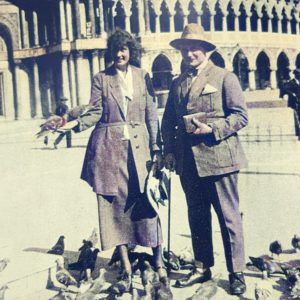 “Well, now young Rory” the brother began as he settled himself opposite me and we were almost knee to knee: “We began our conversation surprisingly in English.” He paused then added: “Lady Louisa was English of course born and raised. Did you know that?” he asked me, raising an inquiring eyebrow. I thought about this question and then shook my head sadly like a fool … I did not.

“And she was very surprised and also very pleased that I had indeed not so long ago actually visited her historic country. And in fact, I stayed in a small town outside London named Windsor. A strange name don’t you think?” The lady had in fact informed me that she had herself visited the familiar famous castle herself in that town many times as a young child. And she had met and had been received as they say by the King and Queen of England no less. “King Henry VIII is buried there and many other famous kings and a few forgotten queens also rest there. This unique historical castle is over 1,000 years old. Built by William the Conqueror. And I hope one day young Rory that you will be able to visit the town and see this amazing castle for yourself. And maybe perhaps remember me” he added rather sadly then gently patting him with affection on his arm turned to say: “I do recall myself” he then seriously continued: “That it was a popular Wednesday morning market day in the town and all the sellers were very busy with heavy fruit and vegetable stalls on display and some caged livestock when I arrived. A happy fiddler from Sligo in Ireland he later proudly informed me had entertained the happy crowd with a jolly jig.

I was also happily able from a well-stocked herbal stall to purchase some much needed fresh medicinal remedies. But what caught my eye then was a large puppet stall that had surprisingly drawn a large appreciative audience of happy children with their puzzled parents who were also enjoying this special well practised performance it seemed. The spacious stage was filled with a dozen or so moving Marinette’s depicted as both male and female. And interestingly all were clothed in traditional fetching peasant French costumes. A large canvas backcloth with cleverly painted images of the Notre Dame Cathedral, the Eiffel Tower and other Parisian famous landmarks completed this popular French scene. Cleverly concealed footlight candles also dramatically enhanced the scene. But pride of place on the stage was a wooden replica of the sinister frightening: Madame Guillotine. She now stood like a bloated Inca goddess awaiting for the delivery of terrified victims, and to eagerly devour the innocent children in her own wicked leisure.”

Later I realised it was a possible political puppet production usually practised on the continent and rarely if ever staged in England. But perhaps now a new political concept that had arrived in England.

“Then from the left stage, an open farm cart was pulled onto the stage by a painted wooden horse with more jeering and shouting from the newly agitated peasants. Then to my astonishment, and to the watching crowd, there placed in pride of place were the two puppets. But now both life-size puppets but skillfully painted as the present King and Queen of England. And both wearing their heavy crowns at a crooked angle, always the traditional symbol of their high ordained office. And both secured with coarse ropes.”

“There must have been three puppet masters or maybe more with skilful and nimble dexterous fingers pulling and jerking the strings from that raised balcony that somehow they never got tangled up. Then further loud voices from backstage somewhere shouted and screamed: ‘Off with their heads! Death to all the monarchy! Set England free’ they all shouted now in frenzied unison. But the likeness of both monarchs’ was amazing in the artistic facial carved depiction of the pair I quickly noticed. Now to be cruelly paraded and castigated on public show on that used and filthy farmyard wooden cart. And soon it seems to be quickly dispatched to their cruel and undeserved deaths. And by demonic, ungodly and dangerous propaganda. And to the strange accompaniment for some bizarre purpose of a hurdy-gurdy musical machine playing somewhere as a backdrop. Then the expected fate arrived to be finally sealed and completed on that frightened couple by that sharpened steel blood-stained guillotine blade.