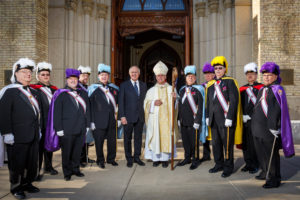 Catholic freemasonry is something few know much about. Most are aware of protestant freemasonry but Rome has successfully kept their version of freemasonry mainly hush, hush with very little information being made public!

The Knights of Columbus and Knights of Malta, not to mention the Catenians are all secretive groups within Roman Catholicism that swear blood-curdling oaths and even call for the Jesuits to kill them if they fail to honour their oaths!

Satan has successfully shielded the church of Rome from much-needed scrutiny whereas Protestantism is wide open for the world and his wife to see.

The following article just goes to show some of the vast wealth the Catholic church has and yet thought nothing of requesting over a billion dollars in tax relief from the US government at the same time!