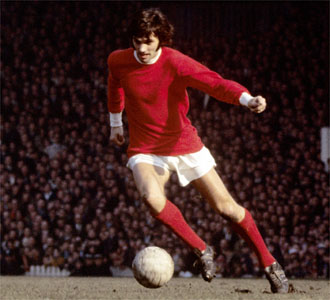 I suppose the footballer most admired and talked about over the last forty years or so must be the Belfast born winger, George Best.

I must admit to never seeing him play on the pitch, but like many others, I read about his exaggerated lifestyle as reported through the popular press off the pitch.

Footballers in the last decade or so have become the new role models to many youngsters, and this I suggest is a great shame.

Young minds can be influenced so easily, and sport is but one way to entice them.

George’s insatiable appetite for alcohol was certainly one of his popular distinguishing traits. And how many young men I suspect tasted their first lager by toasting their favourite footballer after scoring the winning goal?

Too often this liquid gesture swallowed in a minute will become a curse to be carried for a lifetime.

Of Best’s religious beliefs I know nothing, except for a sister, who it is claimed, witnessed to him frequently. If so, it must have been very disappointing for her as he continued on his path to destruction. But we all have choices. We all must choose.

This ministry does a lot of street work. Naturally, we encounter many alcoholics, some far down the path to oblivion. Sadly many just getting the taste for the booze.

Alcohol, I suggest, affects young women by a higher percentage with the ‘feel good factor’; for men, the danger level is only slightly higher. But the girls are catching up, and quickly!

This year in Kent we witnessed to a couple of teenage boys, at the time both drinking from bottles of lager. After explaining the effect it will have on their bodies and their lives, one boy, without prompting, poured his bottle of lager into a ditch. Praise the Lord for this young man’s courage and honesty.

We talk to many young people about the perils of alcohol and all other forms of self-abuse. Government figures support us in this concern. Today we are at crises proportions in the NHS.

Now I always tell them about George Best’s last tragic battle with the bottle. But do you remember how he bravely agreed to be photographed days before he died in a private London hospital as a major deterrent? His last recorded words to his fans were about – no not his football highlights – but of alcohol and the damage, it had inflicted on him.

George did not praise it or call for “one for the road”; he did not suggest “have a drink on me” nor did he suggest to “set em’ up Joe.” Instead, his face racked with pain and imminent death, he begged anyone who would listen, NOT to copy his personal lifestyle.

His petition was simple, but a stark warning to all who dared to listen: “Don’t die like ME,” he begged from his deathbed. 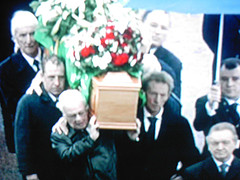 Friends, the Bible has the following dire warning for those that are tangled up in the sin of alcoholism:

If you are involved with this sin, please renounce it TODAY, and turn to Jesus in total repentance and faith alone for your salvation, before it too finishes you off, and sends you to an eternal Hell!