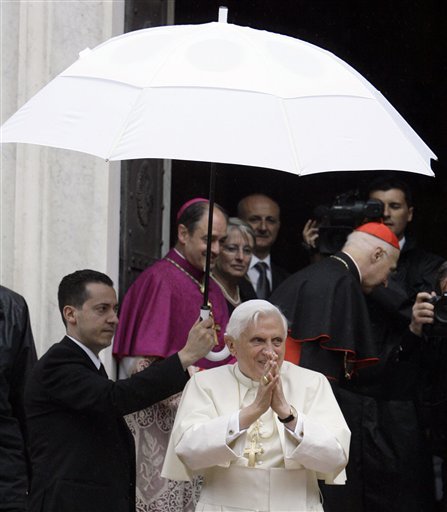 The strange affairs of the Vatican butler, Paolo Gabriele, seems to rumble on, causing even more confusion.

Paolo, now aged 46, had been incarcerated in the Vatican prison, awaiting his fate. But he has now been released and the charges are being prepared against him, in the coming court case.

He is accused of leaking church documents to an unknown party, concerning the Vatican corruption, as he saw it. To quote him he says: “I saw evil and corruption, everywhere in the church.”

He further suggested that a shock might bring the church, of which he served as the pontiff’s butler, to some kind of reality.

He strangely claims he was acting on behalf of the Holy Spirit.

The lasting shock will arrive at the church, when the Lord returns, and maybe soon.

However, his trial is scheduled to begin in late September and if found guilty, he could face up to five years in the “Regina Caeli” prison.

Or maybe, on the other hand, Benedict could grant a last-minute reprieve for his popular butler. The question is why has the Vatican taken this long to get their act together because much of this embarrassment could have been avoided if they had handled it differently.

It all rather seems to suggest that Paolo is a small fish swimming in this Vatican pond and that quite simply a power struggle is and has been going on behind the scenes, in this, the twilight years of the pope.

“Powerful forces that are corrupt and callous are conspiring to try and install their own man in position as the next pope,” so suggests some observant ‘Vatiwatchers,’ on twitter and elsewhere.

Since the 1960s there has been endemic child abuse, subsequent cover-ups, money laundering, and other serious crimes, which seem to have occurred in that Roman edifice, and with frequency and often without any criminal trials against the accused being initiated.

So perhaps the puppet masters behind this recent scandal are cardinal Bertone and the secretive Jesuit black pope, Adolfo Nicolas. Their names seem to have floated to the surface, with a frequent mention in the media.

Now maybe the butler is an “honourable man” and it is important that he is reunited with his family, but the time has arrived for him to perhaps pause and repent, and seek new employment elsewhere in Rome.

There is an old Roman saying that reads: “Crime is like religion, it’s no good unless it’s organized.” Equally, there is also a saying in the Holy Bible that reads: “…and sin when it is finished, bringeth forth death” (Jam. 1:15).

The evidence so far certainly seems to point to the butler stealing the documents (although how he did it is not clear) and then passing them to a journalist. But whether he was coerced into doing this for whatever reason remains unclear, but so far this is only part of a well-rehearsed scenario prepared by those much higher than this servant.

Much more will have to emerge from the prosecution at the coming trial if indeed this is what the Vatican wants. Until then we can only wait and speculate.

A CONFUSED WORLD! WHY THE NEED TO DO STREET WORK 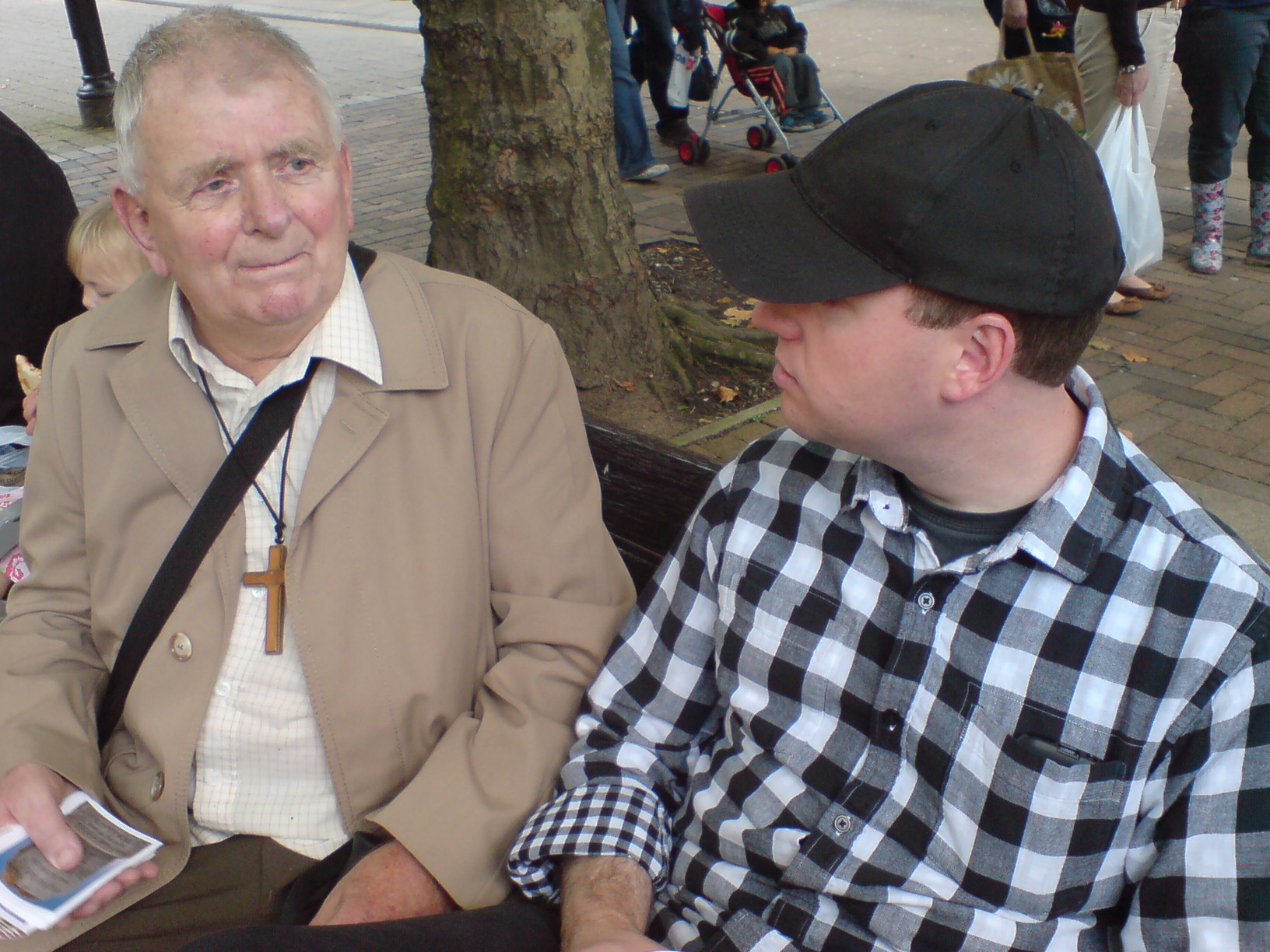 From the months following my conversion from Roman Catholicism to Biblical Christianity, I have always been an active street evangelist and sometimes, street preacher too.

During a recent outreach, an elderly man approachedPatrick and it soon transpired that he was also giving out tracts.

In fact, his name is Vernon and he is 82 years old.

(If this elderly brother can go on the streets, with tracts, why can’t you?) He even told Patrick that when he first got saved in the 1970s, there were many brothers that went on the streets, but now he is pretty much the only one still doing this.

He also shared a story with us, how one-day some years ago, he was actually arrested in Wigan, for giving out tracts to some teenagers.

A belligerent policeman instructed Vernon that he cease from doing this and instructed him to report to the local police station, early the next morning.

This he did, and after being offered a cup of tea, he witnessed to the officer and some weeks later, the man was saved. Vernon stayed friendly with him for some years before the officer died. It was a nice story and we were glad that he had relayed it to both of us.

Some thirty minutes prior to Patrick and I meeting Vernon, a middle-aged woman took one of my tracts, walked a few yards, only to return and tell me that she had been a Mormon but thankfully had seen through it.

She was equally scornful of the Jehovah’s Witnesses and Islam too. In fact, she was stunned when I informed her that Mohammed, a grown man, had married a six-year-old girl!

At this moment she told me how she had experienced the murder of her own child. Now it was my turn to be stunned. I felt the urge to comfort her and maybe probe a little deeper, but she quickly changed the subject and therefore I respected her choice to avoid this awful and unimaginable experience of losing a child, and returned to the more important matter, of her salvation.

Like most people that I am privileged to speak with on the street, she confessed to having a Bible and in fact told me how she was ‘struggling to finish Exodus.’

I invited her to maybe leave that particular book and go to John’s Gospel (I don’t believe she was saved, for she blasphemed a few times, but I did get a good impression that she was trying to find the Lord and be saved). 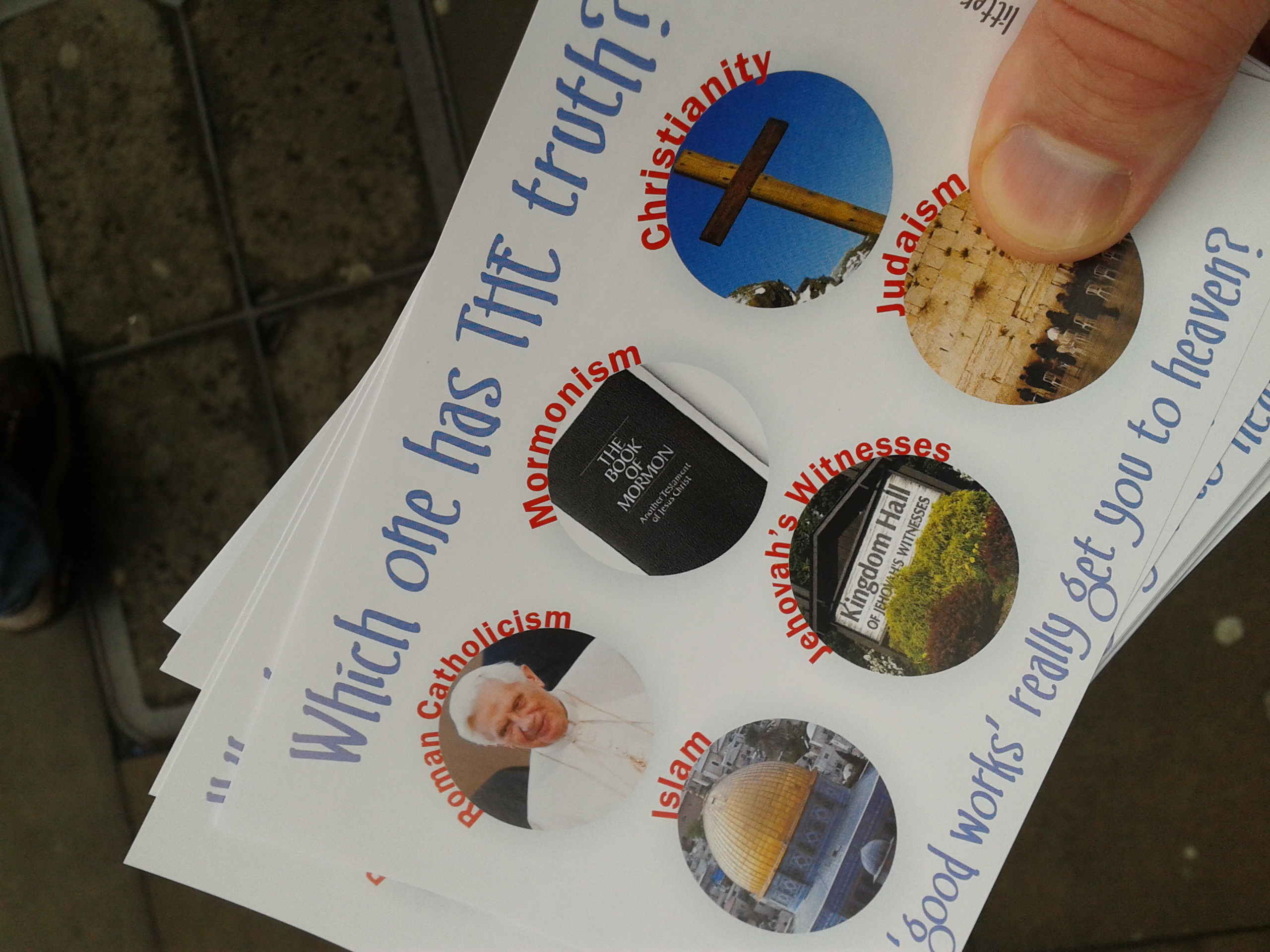 She said she would read it later that day, and I also gave her a quick breakdown of some of the other religions, that had caught her eye, from my tract in question.

It must have been only a few minutes or so after she had left, when a middle-aged man took a tract, stopped right in front of me and as he read the title, softly to his children, uttered, “That’s the problem, we don’t know.”

Sensing this was my opportunity to respond to his rhetorical response, I told him that we can know, but he quickly shut me down, by quoting from the Archbishop of Canterbury (of all people) how we “can’t even be sure that the New Testament doesn’t have missing books.”

(For the record the soon to be retired Rowan Williams is a druid, and as such, has no integrity or credibility and therefore offers nothing substantial to Biblical Christianity. He is also very ecumenical and therefore whatever he endorses or says, when it comes to the real things of God and his completed 27 books of the New Testament, is totally immaterial).

May I say that this type of apostasy from men like Williams and the subsequent confusion it causes is totally unacceptable and one can only shudder to think what type of punishment awaits them at the Great White Throne Judgment.

In fact, we find the following stern warning about Williams and others, in the word of God:

“Beware of the scribes, which desire to walk in long robes, and love greetings in the markets, and the highest seats in the synagogues, and the chief rooms at feasts; Which devour widows’ houses, and for a shew make long prayers: the same shall receive greater damnation” (Luke 20:46-47).

I managed to share some actual facts with this man and told him that Matthew was written around 39 AD, so error and contamination would be impossible, not to mention Matthew actually being an apostle and eye-witness to Jesus’ life and time on the earth.

He didn’t really want to listen to my answers but remained in an indifferent and convenient agnostic mindset. How sad, and how tragic!

In just under an hour, we had given out a modest 60 tracts or so. Our prayers went up for these two people and for the others that didn’t wish to engage in dialogue but did politely take our tracts.