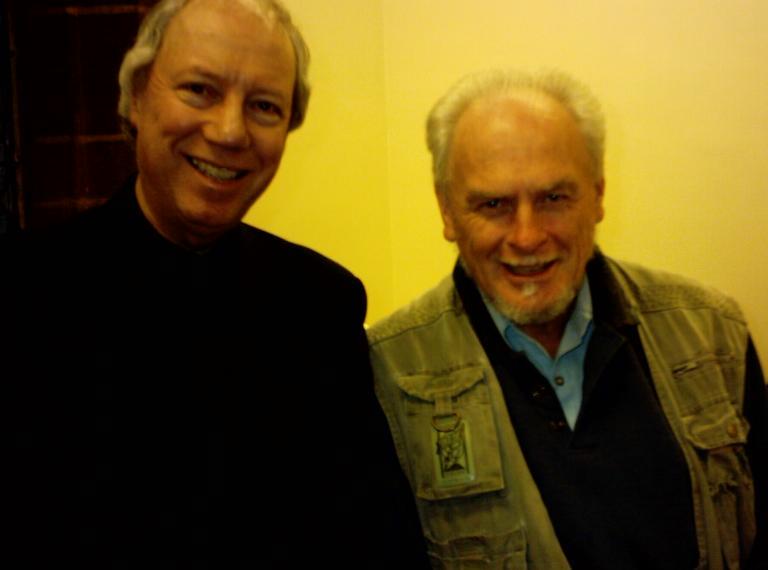 (Patrick on the left, John on the right)

This controversial question was given a theological airing in the cloistered confines of Liverpool’s Anglican Cathedral, on March the 8th 2005.

The distinguished Australian Christian scientist Dr John Mackay was, in my humble opinion, far away ahead in his creation views against the resident Anglican theologian Canon John Polkinghorne, KBE.

It was a great educational debate but in my view, Mackay’s Biblical answers left the canon (and he reminded me very much of Captain Mainwaring of Dad’s Army) spluttering in his hastily assembled answers.

True, he quoted Calvin, dipping into Psalm 19 and its Heaven’s connotation. But when the canon quoted the very dangerous Book of Nature, with memories of the stunted pleas of Frederick Delius and Michael Foucault, then, at last, the battle lines had been drawn.

In the unique role of Adam, in God’s great opus, that is Genesis, canon Polkinghorne claimed that the word, Adam meant the human race, then doubts began to quickly slither into the enquiring minds of the audience.

And later with the throwaway remark from an exasperated canon that we “are all cousins with the animals,” John Mackay reminded his audience that fact is faith. Animals do not share the same special DNA with each other or Homo sapiens. Nor could they ever do so. Creation from God’s hands is good; death through Charles Darwin’s natural selection is cruel. Sad but very true.

Later, with the help of technology through his laptop link, Mackay reminded his very receptive audience that “fact” is faith and reinforced it with Romans 5:17-19. This argument seemed to be settled once and for all.

“Evolution is one of the devil’s biggest weapons,” he declared. “All are accountable to their Creator. “That I may publish with the voice of thanksgiving, and tell of all thy wondrous work” (Ps. 26:7). How fitting for this timely debate.

In a robust Q&A Mackay remarked that in a recent newspaper interview Darwin’s great, great grandson had claimed rather proudly that:

How sad, Mackay remarked, for in Hebrews 12:2, Paul reminds us that:

“Jesus is the author and finisher of our faith.” Man still has much to learn. And scientists and theologians can never be exempt from this great truth.

Today Mackay continues promoting the true faith through his welcome teaching ministry. And backed up with ample DVD’s to encourage the message that God is the Architect and Creator of our frail, yet the desirable world. He is to be commended for convincingly prevailing against the plight, that is evolution.

No false messages from Charles Darwin or the controversial Book of Nature can ever sabotage God’s Holy and unique word.

The discovery of the DNA code only confirms what the Bible predicted, that there would be a great increase in scientific interest before the awaited Second Coming of the Lord.

“[They will be] ever learning, and never able to come to the knowledge of the truth.”