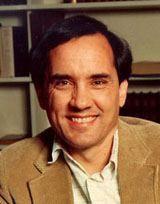 On a recent US radio phone-in programme, Dan Barker was once again allowed to propagate his fundamental and biased philosophy against the nature and attributes of Almighty God.

Mr Barker, according to his own testimony, was a devout Christian for some 19 years in a charismatic Church (this might explain where he went wrong) and during this period, he was an assistant pastor of three churches. However, one day it all when wrong for Dan – he apparently lost his faith.

Without getting into Dan’s motives for rejecting the Gospel (only God can do this), may I say this: the pressure, or so I’m told of those in “signs and wonder” churches is most intense. Each week new “experiences” are requested and expected by the congregation. When they fail to come (and they do), people become disillusioned and bitter. Many simply fall away from such churches altogether, and this is one reason why Dan might have lost his faith. To have a wrong conception and expectation of God, can only lead to spiritual disaster and then bankruptcy.

Barker has been able to move from one lucrative career to another. The self-proclaimed enemy of all religions (especially Christianity) he works closely with his feminist wife. And more dangerous still, would be how he refuses to accept absolute morals, i.e., good and bad. Therefore, he now falls into the camp of Hitler, Stalin and Pol Pot, for all those men certainly made good use of Dan’s type of philosophy (Darwinism), and butchered millions and millions of people. Why? Because to them, man is simply an animal, and as we cull animals, so the same is needed for people population – cull them too.

With Dan’s own private worldview, he could not and would not be able to argue against it, because what is good for Dan may not be good to Stalin. Barker, like Edger Snow, is now categorised whether he likes it or not, with some of the 20th century’s most prolific monsters and tyrants.

Or as Isaiah would write: “Woe unto them that call evil good, and good evil: that put darkness for light, and light for darkness; that put bitter for sweet, and sweet for bitter” (5:20).

During this phone-in, Dan was asked if he could define what sin was. After 10 mins of going around the houses, in which he failed to do this, the co-host rightly intervened to answer his own question – transgression against the Law. The co-host then asked Mr Barker if he considered himself to be a good person. “Naturally,” was Barker’s response. The co-host asked Dan four simple questions to see if he was a good person or not. Several minutes later, the result was unanimous: he was a lying, thieving, blasphemous and adulterate heart. Dan was condemned. But would he accept this? No, he wouldn’t. He still believed he was good ‘in his own eyes,’ and that was all that mattered (Jud. 21:25).

Not only does Dan refuse to acknowledge his sin and arrogance towards God, but worse still, he makes his living propagating his humanistic and nonsensical gospel, with the assistance of certain Christian TV and radio airways (2 Tim. 2:16).

I wouldn’t follow him or his philosophy to the nearest bus stop.

And what benefit does one have if they subscribe to his philosophy? When was the last time a dying person sent for the hospital atheist? Never!

I believe Dan is dishonest for the reason that he still receives royalties from some of his Christian hymns, written when he had faith in God. This for me is totally unacceptable and hypocritical. I would not be able to live with myself if I happily received such money!

(Incidentally, the person who wrote one of the best hymns ever Amazing Grace, died in poverty. Bet Dan doesn’t.)