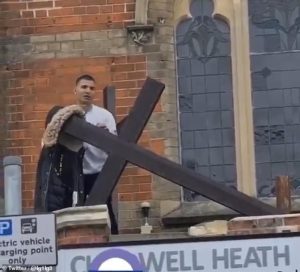 Christianity is the only religion which is fair game for ridicule, attack and blasphemy. As this video proves, a man in broad daylight thinks absolutely nothing by jumping on to church property and attempting to rip down its cross.

While it must be commended that the police actually turned up and arrested this hooligan, I wholly expect charges to either be dropped or for him to quietly be released or for a very lenient punishment to be served on him.

I also wonder if this may be considered a hate crime, in which case had this attack been on an Islamic or Jewish property, everyone from the mayor to the home secretary would be up in arms.

Jesus would say, “If the world hate you, ye know that it hated me before it hated you.”