We once again met together for a couple of short fall outreaches: three full days in London the second week of October and one full day in Oxford the fourth week of October.

“A man’s heart deviseth his way: but the LORD directeth his steps” (Proverbs 16:9).

“And we know that all things work together for good to them that love God, to them who are the called according to his purpose” (Romans 8:28).

The first outreach was planned for north London and was an excellent example of how the Lord orders our steps. Practically every step of the way, we had one plan and the Lord had another. We can be so thankful that our God is good and His ways are right, and we can trust Him so thoroughly that we need not get frustrated with the roadblocks we encounter. Sometimes we see His reasons immediately, sometimes later and sometimes never, but if we wish to please Him in all our ways, then we can trust Him completely. There was some difficulty for some of our party in getting to London. The first flight was late and they missed their connection, but after some delay with rebooking (and prayer at the service counter!), the second leg was rescheduled and the flight arrived in London around 6 or 7 hours later than expected, but at least the same day. The devil may try to keep us away but we have a mighty and wise God who fights for us with eternal power, blessed be His name!

We started bright and early on our first full day and as customary, we joined together for a Bible study before heading out. This time brother James began going through the prophecies fulfilled by the Lord Jesus, starting with Matthew.

“Now all this was done, that it might be fulfilled which was spoken of the Lord by the prophet, saying, Behold, a virgin shall be with child, and shall bring forth a son, and they shall call his name Emmanuel, which being interpreted is, God with us” (Matthew 1:22-23).

“Therefore the Lord himself shall give you a sign; Behold, a virgin shall conceive, and bear a son, and shall call his name Immanuel” (Isaiah 7:14).

There are so many prophecies fulfilled by Jesus Christ in His first coming, and it is wonderful to have a look at the Gospel of Matthew and then back to the Old Testament, most often to Isaiah, and see how so many aspects of the Lord’s earthly life and ministry were spoken of beforehand. A certain reminder that we can trust the Bible because of its many prophecies and fulfillments! And also a certain reminder that we can trust the many yet-unfilled prophecies regarding His second coming!

“And the light shineth in darkness; and the darkness comprehended it not” (John 1:5). Since we were staying in north London, travel times to our first outreach spot were a bit long, but we made it to the British Museum around lunch time. This is the third or fourth time we’ve been there, and crowds and acceptance of tracts were far sparser than we wished. It seems to be something we see often: our first time in a place goes great, but our second visit is disappointing. At times, we are dismayed to see how many people reject the light of the word of God. Some do not comprehend that they are in darkness, and some don’t care!

Because of this, a switch in plans was suddenly decided, as we considered trying King’s Cross for the afternoon rush hour. We hopped on the bus for the first leg, and just as we were passing St Pancras station, we were reminded of the two successful times there in 2016. Someone suggested getting off, everyone agreed and we made a mad dash for the bus exit!

This proved to be of the Lord, as tract reception was really good. Brother James also had a very good conversation with an older gentleman who had some background in the Jehovah’s Witnesses religion. He was angry and confused about the JWs but still not convinced they are fakes.

He also spoke with a lady who said she was born again and had worked with some well-known figures in English Christendom. She was rather of Calvinist persuasion, but she seemed well-meaning.

One of our sisters spoke with an apparently homeless lady who said she was open-minded and believed all religions, but didn’t know why the Bible should be believed. She appeared to be under the lingering effects of some kind of substance, so the conversation wasn’t entirely coherent but she was encouraged to get a New Testament or Bible at a second-hand shop, where old Bibles are sadly abounding and good leather-bound KJVs can be bought for one pound.

We also encountered some strange requests: a young Bulgarian girl with a Muslim boyfriend asked us if we knew where the Hillsong church was. Wow, someone needs to get a hold of the word of God, pay attention to it and be truly born again!

The next day we stopped in the morning for a brief visit to the Freud Museum (a strange place, to say the least) for some material for a future video by James and Patrick. There are so many artifacts and antiquities on display in this house where he lived for the last year of his life, after fleeing Nazi Austria. This man described himself as an atheist Jew, and had some very odd ideas about Moses, bordering on Kabbalah-like beliefs. Although revered by many in psychology and psychiatry, he was clearly influenced by pagan religions and possibly by some occult interests.

Afterwards, in Camden, James and Patrick shot some footage on Ruth Ellis, the last person to be hung in England for a murder conviction. We also did some letter-boxing in both these neighbourhoods. 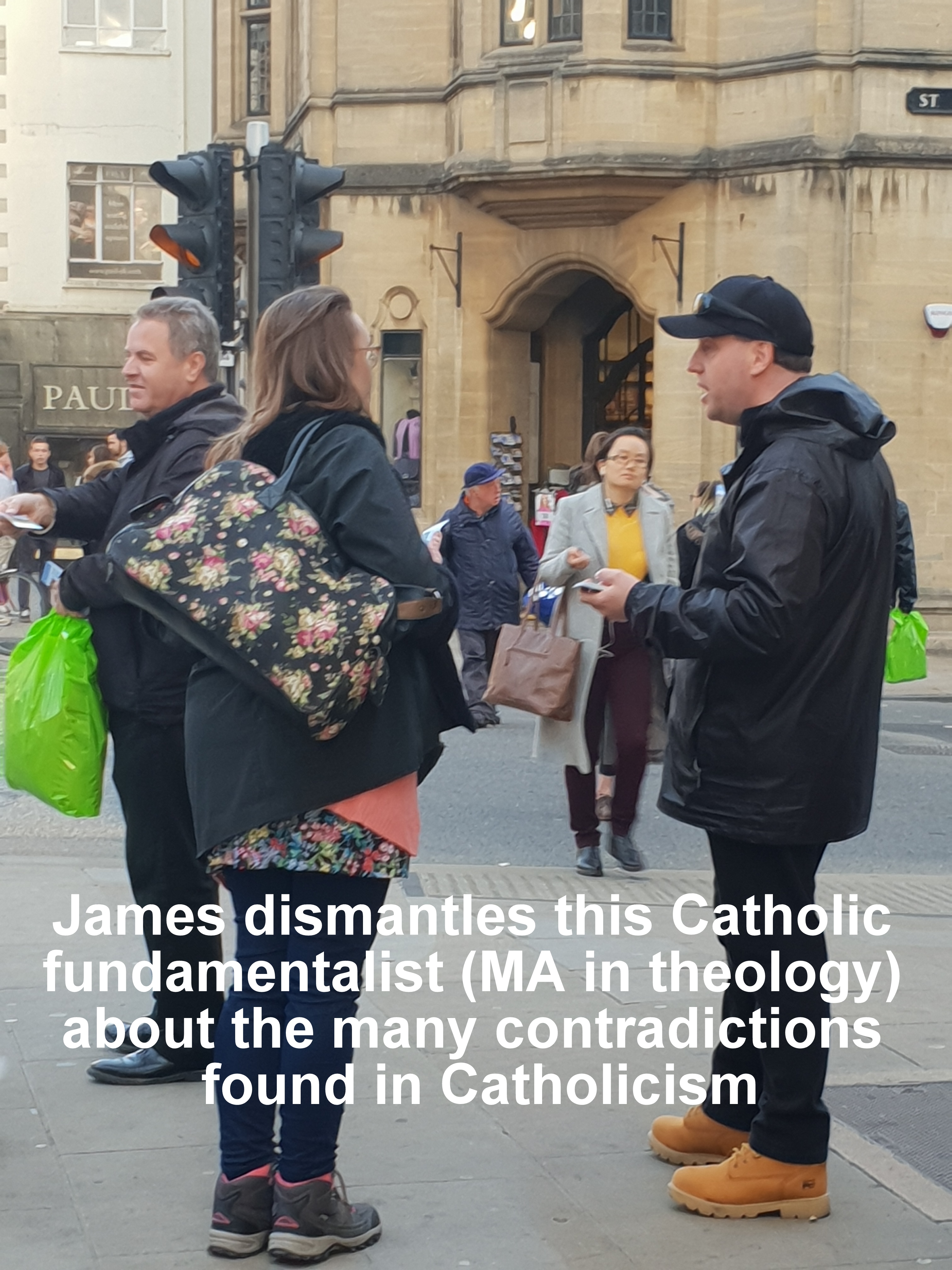 The following morning was spent in Golders Green, with some tracting at the busy bus station. This was also a completely unexpected turn of events, since it was suddenly necessary to stay closer to our base. Because this is a predominantly Jewish neighbourhood, reception was not expected to be that good, but the Lord obviously knew that people would be much more receptive than we thought.

In the afternoon, the plan was to go to Hampstead centre, but after some time fruitlessly searching for a place to park we found a large parking area in Camden, the next town over. We spent a fair amount of time at the Chalk Farm station, and many people were quite happy to receive a tract. Another example of how the Lord directs our steps.

One gentleman seemed to understand some things and accepted a tract. The conversation started well, but he began to vehemently deny that Jesus Christ was God, saying it was impossible for God Himself to die on the cross. This man kept coming back and directing a few sharp words with James, but our brother stood his ground, as always. The following day there was still a bit of time for some of us to do further tracting in London, near the Natural History Museum and in Leicester Square. They were both very busy sunny spots, and tracts were accepted well. In fact, we saw a Spanish family also staying at the same B&B as we were! Such a coincidence! We know no one in London and yet we saw the only people we know! It was a blessing to give them several tracts.

A few of the best one-liners:

–Too late for me, luv
–Do you have a spare pound?
–I’m open-minded, I believe in all religions.
–How do we know the Bible is true, and why is there evil in the world?
–No, I don’t want one! (Her friend:) Oh, I want one!
–Is this for a philosophy class?
–We go to church already
–All churches are corrupt; I don’t believe Jesus Christ is God
–(A famous pop star:) no answer, not even a refusal.
–(Offering a specially-for-Catholics tract:) “You’re trying to convert the converted, I’m Catholic!” (our answer: “No problem, it’s perfect for you!”)

To end this write-up, we remember that we do not see the fruit, but we trust in the following:

“So shall my word be that goeth forth out of my mouth: it shall not return unto me void, but it shall accomplish that which I please, and it shall prosper in the thing whereto I sent it” (Isaiah 55:11).