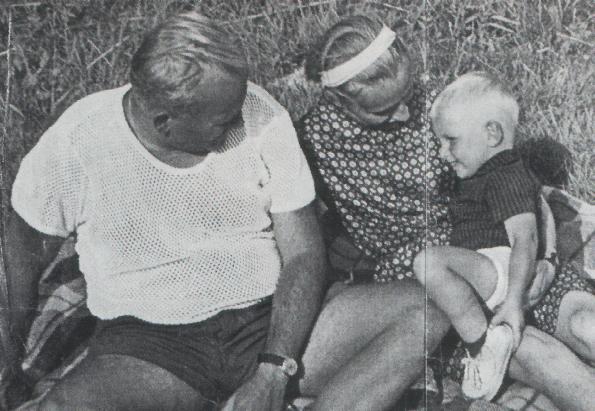 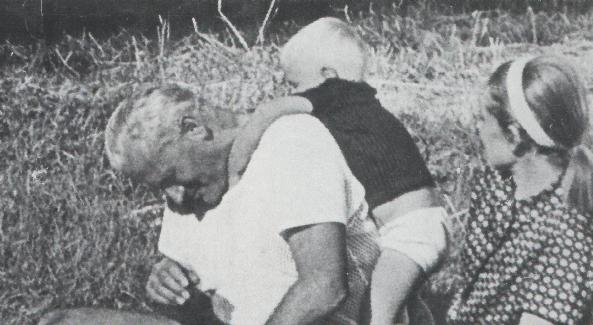 (Pope John Paul II, enjoying playtime with a young boy, while the woman looks on)

Thomas Aquinas once said of Peter the apostle: “Jesus did not separate Peter from his wife because he did not wish to sever the bond of matrimony which was of God’s making.”

Some Catholic apologists have tried to argue that Peter, upon the Lord’s calling, abandoned his wife and children to follow Jesus. However, not only does Aquinas disagree with this, but if we follow the clear and very helpful hermeneutic pattern that Martin Luther rediscovered – Scripture with Scripture to interpret the Holy Bible – we find certain verses which would defiantly prohibit a spouse leaving his or her family to fend for themselves.

It should also be pointed out that God, under the Mosaic law, made it compulsory to love and serve one’s family (Ex. 20:12). To do otherwise would be very shameful and also result in being a lawbreaker!

In 1 Cor. 7:21, the apostle Paul tells us: “Brethren, let every man [women too] wherein he is called [salvation], therein abide with God.”

A sinner, who comes to faith in Christ, was and is – according to the word of God – to stay, as they are, i.e., married, single or divorced. If a Christian comes to faith in Christ and goes on to leave his/her family, or worse still his/her children, then according to the Bible, he/she is not only irresponsible but is worse than an infidel (1 Tim. 5:8).

In the third and fourth century AD, Roman Catholicism took a rather bizarre and pagan view with regards to sex in marriage. Priests who were married (most were and with numerous concubines too) were not permitted to have intercourse with their wives at all. Multitudes, of course, ignored this teaching and to this day still, do. Rome, therefore, was forced to accept that promiscuity within their clergy was and is tolerated, providing it is kept hush from the laity.

During the dark ages, the catholic church hunted down priests that had married and subsequently many were murdered. One example would be of a cardinal Beaton. This cardinal in 1540 set out to track down a Thomas Cocklaw, a priest of many years standing. However, when Beaton failed to achieve this, it was decided that the priest, which had married Cocklaw and his wife, would be arrested and later executed. This was done to set an example to others found guilty of challenging “Rome’s authority” concerning the forbidding of priests marrying.

The hypocrisy of this whole saga is breathtaking for Beaton had ten children of his own (seven boys and three girls, the Register of the Great Seal of Scotland, 1513-1546).

In James Billton’s book Calvinism is it Biblical, he quotes a former catholic priest, David Rice: “At the very least 100,000 priests have been excommunicated in recent years because they have done what is right and made legitimate their relationship with a woman. Priests can have children and the Church will support them financially, but whenever they officially marry all financial help stops and the priest is excommunicated, although, if a priest in the Church of England converts to Rome, he is accepted as a priest, wife and all” (p. 20).

When thousands of Anglican vicars joined the catholic church in the early 1990s, a generous financial deal was made, so as to allow their children to attend private schools, with the diocese(s) picking up all costs.

The Council of Trent, in 1563, made the following official and rather strange statement concerning the Holy See’s view on marriage and celibacy: “If anyone says the married state is to be placed above the state of virginity or of celibacy and that it is not better and more blessed to remain in virginity and celibacy than to be united in matrimony, let him be anathema” [a curse!]

This statement is in direct opposition to Hebrews 13:4: “Marriage is honourable in all, and the bed undefiled: but whoremongers and adulterers God will judge.”

The catholic church, for hundreds of years, has dangled this and other insane and ineffective curses over the heads of millions of catholics and ex-catholics worldwide. Even after Vatican II, when Freemasons, atheists, Muslims, Jews, along with six protestant apostate theologians dismantled their blasphemous mass and other ‘sacred’ catholic superstitions, avoided such medieval curses being put on them!

A true born again Bible believing child of God should have no concerns whatsoever with such ridiculous and unnatural, not to mention satanic teachings, for such is forever covered by the Lord’s eternal righteousness (Rom. 4:5).