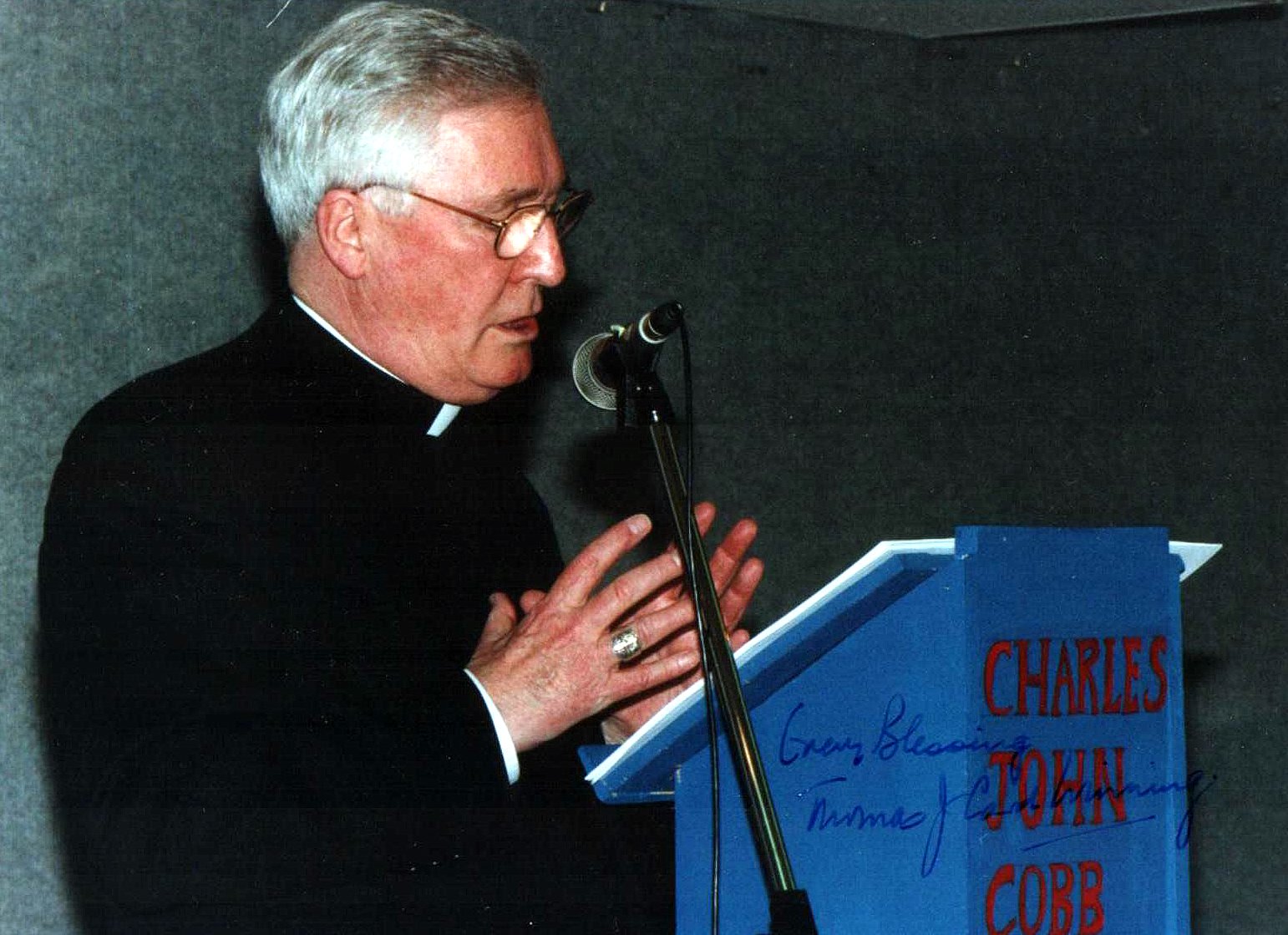 Before I was saved, I had the opportunity of choosing a guest speaker to give the annual Charles John Cobb Memorial Lecture.  I wrote to the Scottish Cardinal, Thomas Winning, inviting him to come to South London and deliver the lecture on any subject of his own choice. I knew it was a long shot and surprise, surprise it paid off.

Tom Winning had always been controversial by amongst other things his open support of the miners in their year-long strike of 1984. His open opposition to the Thatcher solution of privatisation, and of course the Falklands War.

Like many other ‘political’ priests in the Catholic church who espouse an open socialist view, he would remain orthodox in his promotion of his churches teachings as formulated in the Vatican II documents. His zeal for Marxism I suspect was learnt by experience in the grim realities of post-War Glasgow (and I suspect would help him later in the 1960s to initiate this the through the teachings of the Justice and Peace Commission in Scotland).

Interestingly, the late miners’ leader, Mick McGahey, a lifelong paid-up member of the Communist Party and Arthur Scargill’s number two in the N.U.M, always spoke well of Winning and of his late father, whom he may have known in the past, perhaps in the tough arena of Scottish politics. (Incidentally, Scargill once told me that the greatest hero in his political life was Jesus Christ!)

Tom Winning was a well-known face in media circles as well. But it was his passionate views on abortion that many came to know about him. He had even agreed to debate the moral aspects on television and was happy to offer money through his church to pay pregnant mothers to resist the curse of abortion, and hopefully have their babies, which many did.

And Homosexuality? Oh yes, he was against that as well. Because of his views on this contentious issue, he later drew the hatred and opposition of the organisation Outrage. By now he was firmly in their sights.

Remarks made by the cardinal and quoted in the media at the time during a conference in Malta only fuelled their antagonism towards him. This would be brought to a head when Tom Winning arrived to give the Cobb Lecture. 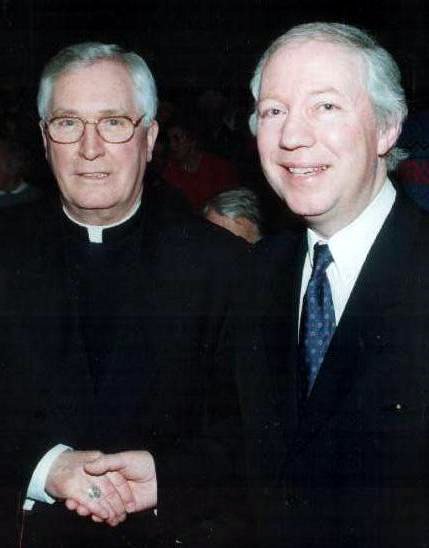 (Winning and I before the meeting)

That evening the lecture hall was packed, with the usual supporters who came each year, and also the curious who had turned up just to watch and hope that something might happen, and of course, the media were there in force, with over a dozen press photographers lined up against the wall, rather like a football match all hoping for that special picture for the morning papers, obviously, they had been tipped off to expect something rather special to happen that evening. And it soon did!

Placed members of Outrage sat in the audience as well as their waiting leader. Then at a signal, they suddenly jumped up during the lecture and attempted to force the meeting to be adjourned. This would not happen as long as I was chairing the meeting that night.

Then all pandemonium broke loose on the stage. I should say that at the back of the hall were standing over half a dozen police officers, who when all this was going on, did absolutely nothing! Remember a man of his age, which I suspect suffered high blood pressure, had to tolerate all the abuse and threats, and with not an officer in sight.

One does wonder what would have happened if Nelson Mandela or Bob Geldof experienced such abuse?

Through all of this violent upheaval Winning, then aged 75, stood quietly, almost serene as if he were not part of the commotion happening all around him. (He later told someone that he was able to detach himself from what was happening, but at the same time be able to watch the activity all around him. This rather sounds like an out of body experience doesn’t it?)

And angry activity there was, shouting, screaming, snatching down crude posters, pointed fingers and yes physical threats with drawn fists. Yes, it was some evening, with even an American Marine jumping up on the stage to defend the cardinal, who he was I never knew or found out.

The audience, now very restless began after some time a slow handclap against the demonstrators chanting: “Out! Out! Out!” It was some evening that I won’t ever forget.

Later when the order had been restored, speaking quietly to a hushed audience that had applauded him he said: “Charles Cobb said at his trial, ‘I fear God, not Man.’ My dear friends. So do I.”

Again he was loudly clapped, perhaps for his composure but rather, I like to think, because of Cobb’s words recorded in 1915 at his trial.

When he became Archbishop of Glasgow in 1974 he chose to speak to his diocesan priests of trust and openness saying: “What I want to encourage above all is a spirit of friendliness and freedom.”

I think in retrospect it gives us some idea of the man and his style.

Of course, I met the man just one year before his death and suspect like so many of these men used to acquiring power and enforcing it, they somehow mellow with age. What he was like in his clerical judgment in dealing with others who opposed him is probably another matter.

I like to think he made a lot of new friends that evening because of his composure and charisma.

I know he enjoyed the evening and saw it as a great personal success because he told me so.

The next morning my son James and I met him shortly before he flew home to Glasgow (and yes we were invited by him to attend his private morning mass, and yes we accepted). We later talked to him of church and secular matters. A very easy conversation, I remember.

James then presented him with a copy of his newly released CD, which he happily accepted, surprising me by knowing two of the songs! 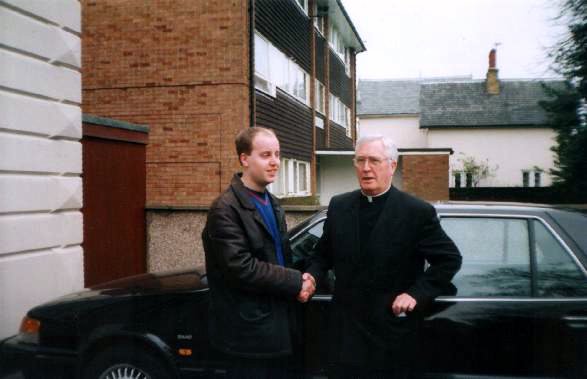 (James, the cardinal and the car)

The previous morning we had collected him from Gatwick airport. He seemed in good form after his flight (he had also surprisingly travelled down alone with no bag man, very unusual I thought). With him, there were always plenty of jokes to spare. I remember where he was staying that night that there was on the wall a copy of a religious painting depicting Mary at the moment of the Annunciation. He walked up to it, studied it and turning around asked: “Who’s that woman?” Needless to say, there were several seconds of embarrassment from his hosts. You see, you never knew with him if he was joking or not.

Earlier on the way to London, with him safely seated in the front of James’ car, I cautiously told him that I suspected there would be some form of disturbance that evening from angry homosexuals and their supporters. This didn’t seem to worry him in the least but it did cause him to ask my son about a theory he had seen or heard, in which some claimed that they were born that way and that there was nothing they could do to change their sexual predilection. Both James and I rejected such a dangerous opinion because if this were true then rapists, wife-beaters, alcoholics, serial killers and others would happily sit under the same umbrella of convenience, claiming they are unable to help themselves because of their actions. In other words, it’s all in the gene pool.

I believe we make our own decisions and as such must learn to live with the consequences. Heaven or Hell the choice is always ours!

Certainly, homosexuality is forbidden in the Bible. So I think Winning was correct in his dismissing such a foolish notion, but of course, such thinking is not ‘politically correct’ in today’s liberal climate, is it?

One observation about him from somebody who met him for the first time that evening was that he was approachable, never pretentious.

My wife also remarked that she could see his Scottish roots, perhaps even a hands-on man, she thought.

And of course, that brings in the whole aspect of the strong past religious influence of Calvin and Knox in Scotland and of their interpretation of the Bible. Had he been influenced at all by their teachings, I wondered, or had he always walked the Roman path?

I know he had an admiration for the AV Bible, so I wish I could have asked him about it and other important issues that affect all of us, but most of all in the gospel of John 3:3, when Jesus demands that: “Ye must be born again.”

I wish I could have sat down with him and asked in all sincerity: Are you born again? Are you saved, Tom?

And I do wonder how the cardinal, who sat in the front of the car, would have answered my important question, don’t you?