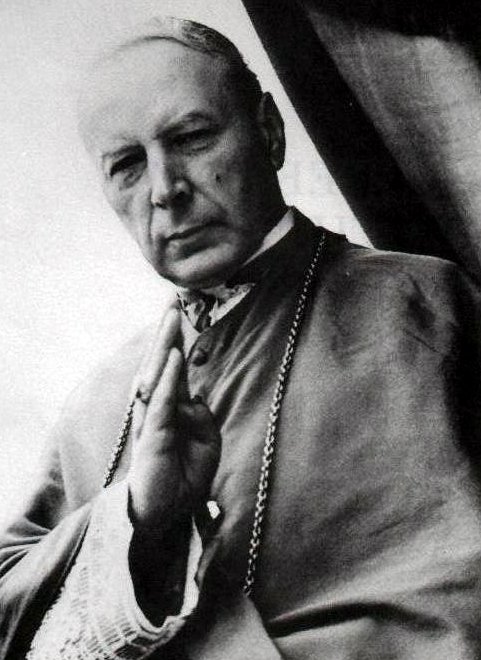 Poor Stefan Wyszynski will, I suppose, always be remembered as the bridesmaid and never the bride. Or in other words, Wojtyla made Pope but Wyszynski didn’t.

And yet at one crucial moment in the 1958 papal Conclave, Stefan really thought he was in with a winning chance. But sadly the younger man from Krakow would overtake him and claim the prize. Karol Wojtyla, who shortly after his election as Pope, was witnessed quietly reading an unidentified Marxist Journal. This brought a swift response from a fellow cleric declaring rather sadly: “We have a Communist Pope.”

So perhaps the doubts Wyszinski harboured about the young Wojtyla and his suitability to be the next Pope were maybe correct. 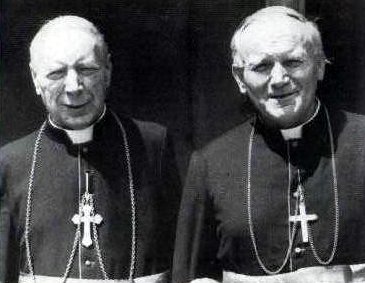 And yet were you aware that this prominent Pole has a delicate flower named after him?

Few cardinals can boast this distinction. In fact, the flower is a clematis of the deep pink/red variety, however sadly scentless and seedless.

Wyszinski was ordained in 1924. He would it seems travel throughout Europe between both Wars. Was this somehow a clerical “gap-year” or was he cementing future contacts to aid his career? (Reinhard Heydrich, head of the Reich Security Police and Himmler’s deputy, was also meeting important Vatican contacts for future operations in the same location.)

Some suggestions have surfaced that the young Karol Wojtyla, at this time of his life, was employed a chemical salesman by the I.G. Farben group, the then makers of Zyklon-B gas. However this could be a KGB or SAVAK planted rumour, still to be confirmed.) Wyszinski was however briefly held by the Gestapo during the war- then quickly released. (And interestingly no evidence seems to connect him with the notorious “rat-run,” then operating from Rome under Bishop Hudal.)

In 1948 he was appointed Archbishop of Warsaw.

Always a doctrinal conservative as regards his church, the pope would reward him with the red hat of a cardinal in 1952. (However, at the 1958 papal conclave, he was surprisingly a supporter of the liberal reformer, Cardinal Roncalli, later Pope John XXIII.) Interestingly in 1968, Wyszynski would ban in his diocese, Joseph Ratzinger’s book Introduction to Christianity. Much to liberal for his tastes it seems. My how times have changed!

But it was always inevitable to many that the super egos of Wyszynski and Wojtyla would openly collide. And they certainly did.

In 1953, Wyszynski was placed under restricted house arrest by the Communist regime. (Stalin once joked about him that, “How nice it would be if Cardinal Wyszynski was on our side.” Maybe “Uncle” Joe knew something we didn’t!)

He would, in fact, be moved three times during this traumatic period. But he would find the time to write his book A freedom Within. I’ve read it and suspect he could have made a good living as an author if the church hadn’t beckoned. Not sure however about his theology or his comparisons with the suffering Christ. He also penned another book Working your way into heaven, Or in other words, good works get you into Heaven; they don’t of course and never could. Read Ephesians 2:8-9.

During this time as Wyszynski came to terms with his confinement, it seems his fellow Bishop, Karl Wojtyla never visited him or left a calling card. Instead, we are told, “Wojtyla, meantime went on river and mountain holidays. He also took to skiing again,” and interestingly, composing poems.

All of this must have rankled with Wyszynski, barely subsisting on meagre diets in unheated rooms. Incidentally, I can find no mention in his prison memoirs of any ordered physical brutality being inflicted upon him. But certainly, mental distress cannot be ignored. There are veiled references to this. Prescribed medication may have been administered, perhaps through hallucinating drugs without his knowledge. The same cocktail perhaps used against Cardinal Mindszenty is a possibility.

It has been noticed that secret Polish police files of the UB since released after the collapse of Communism, emphasised this intellectual difference between the two men.

Naturally, the secret police conducted a 24-hour watch on both men. This would lead them to assess in their reports that Wyszynski was of little help to them. Instead his known anti-Communist views and with a chip on his shoulder over his menial family background as well as his “shallow, emotional and devotional Catholicism”, would be of no use to them or their Russian masters in Moscow. (Many of these sensitive files would soon afterwards be sold on to other intelligence agencies. Much of it concerning information on both men.

Wojtyla, on the other hand, was an intellectual with leftist credentials, i.e. in the Krakow chemical factory and ties to youth groups. And yes they could work with him and he with them, it is claimed in the documents.

Meanwhile in Rome, after the death of Paul VI, the astute Cardinal Koenig remarked to the London Times correspondent, that the time had come perhaps for a non-Italian to occupy the papal throne. If Wyszynski suspected he might be Koenig’s natural preference to become the first Polish Pope, he was soon disappointed and I suspect annoyed when Wojtyla, on Oct 16th 1978, won the nomination for Pope. And there he would remain in Rome until his death in 2005.

Wyszynski would remain in Poland until his death in 1981.

Today on e-bay you can purchase if you so wish a gold medal of the man for $35.

Wyszynski also has the fame of having the distinguished British Actor Christopher Lee, C.B.E portray him in a 2005 movie!

Today he lies in the crypt of his church. He was succeeded by Cardinal Glemp.

He may not have made Pope but a gold medal struck in your honour-an English actor of the realm to playing your life…and last but not least, a delicate flower named after you. Not bad if you are judged by the world. 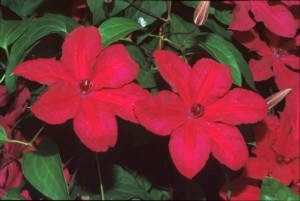 But more important I have to ask: was he saved and born again. Now that’s the question? (John 3:3-7.)