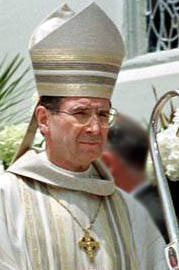 The Archdiocese of Los Angeles has announced that cardinal Mahony has been dramatically “stripped of all parish and administration and public duties.”

Archbishop Gomez, the present leader of the diocese, said that after reading many of the sealed reports, “that they made brutal and painful reading. The behaviour described in these files is terribly sad and evil.”

Mahony retired in 2011 under a clerical cloud of mistrust but he took aim today in his blog by remarking about Gomez saying: “Not once over these past years did you ever raise any questions over our policies.”

So it seems Gomez knew more about this as well.

We would urge that the outgoing pope and his former right-hand man, Sodano, not forgetting the Nuncio, of course, should all be thrown into jail!

(Incidentally with the pope’s shock resignation, came the surprising news that Mahony will travel to Rome to join his fellow cardinals, as they enter the Conclave and vote for the next pope. Clearly, Mahony’s sacking hasn’t resulted in him forfeiting his ‘right’ to be one of the next pope ‘makers.’)

Rome is not the church of the blessed Lord Jesus, never has been, but a corrupt and counterfeit religious organization, as many of the victims and their suffering families still reliving this never-ending pain, would now totally agree.

Today they still seek further justice but we’re not sure a slap on the wrist to Mahony is going to ease their ongoing pain in these end times.

Roger Mahony once ran the richest Catholic diocese in America, yet his beginnings were very humble. Adopted in 1936 by an Irish Catholic couple that worked a chicken processing plant in North Hollywood, the young Roger learnt to speak fluent Spanish from the immigrant workers at the plant. And it would later help him in the ethnic Church politics of Southern California.

Appointed a Cardinal in 1991 by the then pope (and do check out Mahony’s Episcopal coat of arms; there you can clearly see The Cross of Lorraine, a symbol of the Knights Templar and also used by Aleister Crowley for his Sigel of Baphomet.) Mahony, it seems settled into his new job in Los Angeles, fairly comfortably.

Always on the liberal wing of the church concerning, celibacy, liturgy, and eucharistic theology, he seemed even more relaxed on topical sexual issues.

His Archdiocese was soon christened the most ‘ user-friendly’ for ‘homosexual advancement’ in America. Some even called it with contempt, “The lavender mafia” (with many open homosexuals and lesbian clergy flaunting their gender expressions.)

The Cardinal refused controversial individual checks on church volunteers working with youth. This would later be amended. Some hostile critics claimed he cared more about politics than the safety of vulnerable children. His protestation on this and other matters would allow the media to name him “The Teflon Cardinal.”

However, it was the damaging and disturbing paedophile scandals, concerning a proportion of priests, that has dominated the culture of American news, during the last decade. And these allegations will not fly away. Very soon the name of Roger Mahony became a household fixture and always treated with disdain, even practising Catholics started to petition Rome for his removal.

Soon he would collect a serious of sobriquets such as “the master of delay” (this because he played for time with the courts in handing over documentation, concerning offending priests. This cat and mouse game is still going on in and out of the California courts and beyond.)

He would also be named by the media, “The master of cunning and deceit.” But if he was aware of such an unpopular feeling for him and his church, nothing passes his lips as an apology for what has happened in his diocese.

As the lay Catholic writer and observer, Dr. Marian Horvat, PhD, once said of him:

“When I see him I am reminded of a fox in his lips. And a gleeful smile. But his eyes do not smile, they are wary, watchful seeking the advantage concerning his sides and back.” (Dr. Horvat also claims that there were two Lucy’s in the Fatima ‘revelations.’) It certainly seems Mahony’s “the master of delay.” Another nice name he has collected, with all the others!

Of the on-going paedophile crisis that continues to devastate the Catholic church, some financial journalists have attentively suggested that it has cost his church in Southern California over $1.5 billion. And after reading of the lies and contempt shown to victims of abuse, Mary Grant, herself the director of a survivors network, has openly called for the arrest of Mahony for protecting clergy from official police investigations.

So how long can this suffering continue for the grieving victims known and unknown; men and women who seek justice for the theft of a stolen childhood.

His church will one day have to give an account of their actions, deeds and words to One higher than any civil court of the land. Until then they should remember, God will never be mocked.

On July 15, 2007, the Archdiocese of Los Angeles reluctantly and through gritted teeth, agreed to pay out in damages to over 600 victims of child abuse, $660 million. It has been widely reported that over 4,000 American priests have been identified at paedophiles and since 1950, the Catholic church in America has been forced to pay over $2 billion to child rape victims!

It was also reported by the Los Angeles Daily News (4/12/07), how Mahony was recently attacked by a man in the street, who was known to him:

“…the man was shouting expletives and knocked him to the ground. It took a month for his injuries to heal after the attack.”

“The main message was that his wounds healed within a month, bruises and all, but the victims of child abuse are still suffering after many years, that their wounds are far deeper than what he experienced.”

Mahony didn’t report this attack to the police.

Today Mahony resides in North Hollywood, his old childhood parish. This should offer him time to reflect on how fortunate he is that he’s not sharing a prison cell with others like him. We will watch this sorry saga with great interest for any future development.