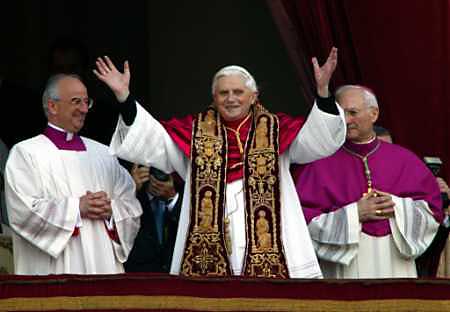 The surprise papal election of Cardinal Joseph Ratzinger to become pope, did indeed take me and other experienced Vatican watchers, rather by surprise. (Not my son, James, however, who had been predicting the rising star of this German Cardinal for some weeks.)

I had long been convinced that the papal candidate would be an Italian, with a favourite coming from Venice. Well, not this time it seems. The cardinals in the Conclave had decided otherwise. And I got it wrong.

At 78-years-old, Ratzinger interestingly is the same age as Angelo Roncalli was when he was voted in to become John XXIII in 1958. Roncalli was also a pope of many surprises, not least in calling the Second Vatican Council and summoning all the bishops to Rome. 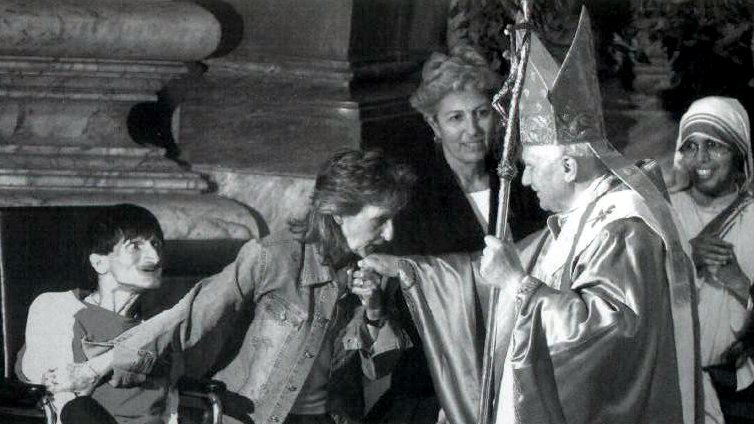 (They came sick and they left sick. No pope has never been able to heal as Peter or Paul did.)

Joseph Ratzinger was born in the traditional Catholic heartland of Bavaria. The son of a policeman, (some would see his role in Rome as that of a super policeman.)

His elder brother is a retired 81-year-old priest, it must be in the gene pool.

The political climate of Germany conscripted all young men to volunteer for the Hitler Youth. The young Joseph would later, during the War, be an auxiliary in anti-aircraft protection of his homeland.

With his ordination in 1951, his rise in the Catholic church and especially in the field of theology saw him occupying distinguished chairs in the Universities of Bonn, Munster, Tubingen, and Regensburg. It was, however, in the changing clerical and political times of Vatican II.

Later as a popular archbishop of Munich, he would move over easily to the centre ground, with the election in 1978.

Ratzinger was instrumental in the Conclave that voted in the Polish cardinal from Krakow. And it does seem that Ratzinger cast his vote in the empty golden chalice in the Sistine Chapel in favour of Pope John II. This gesture seemed to have allowed the new pope to appoint Ratzinger as his personal enforcer at the “Congregation for the Doctrine of Faith” or as it used to be called “The Holy Office,” which instigated the horrific violence that was known as the Inquisition.

Over the next 20 years, Ratzinger would be called “Le Panzer Cardinal” and “God’s Rottweiler.” And not always with affection! Indeed many prominent liberal Catholic theologians would see their academic careers falter, and in some cases, simply disappear.

Since the late 1970s, Ratzinger had been openly critical of the new Liberation Theology that was sweeping through Central America. He would refer to it as “godless Marxism.” He has, it is claimed, contagious charm and is an accomplished pianist who specialises in the delicacies of Mozart, something he would have in common with Condoleezza Rice, herself, also an adroit virtuoso of the Steinway.

But all was to change with the lingering death of John Paul II. Then the open buzz in worldwide dioceses was, who could or would, be able to follow such a popular and charismatic figure as the late pope from Poland. He would be a hard act to try and follow. 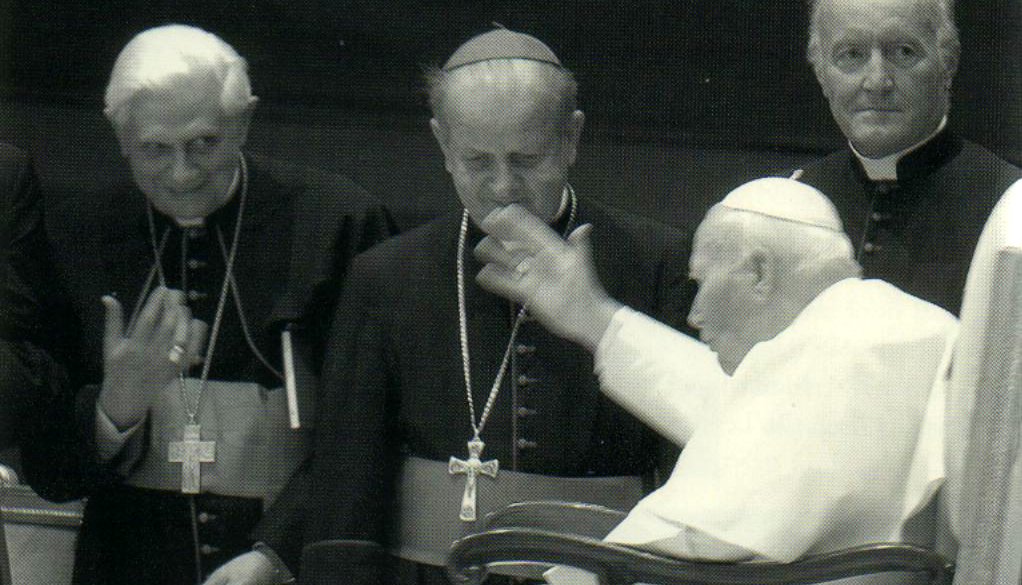 (Ratzinger eagerly waiting in the wings to be the next pope. He was one of the few cardinals that openly wanted to be the pope)

Cardinal Ratzinger was an outside favourite with the bookies, and many of his fellow Cardinals had bitterly crossed theological swords with him in his powerful role as enforcer for morals for the late pontiff. But surprisingly on the fourth ballot on April 19th, this articulate policeman’s son became the first German pope for almost a thousand years, following pope Victor. The cardinals had spoken. He was their man or was it just an ‘inside job?’

Well with the new pope choosing to be called Benedict XVI, some interesting speculation is offered. That he declined to be called John Paul III, does rather distance him from the previous pope.

Benedict XV (Giuseppe Sarto) had, before his election, come from the popular seaport of Venice. This Italian First World War pope had tried to play a political role in ending the horror of the war, unsuccessfully, and almost bankrupted his church. No mean thing I say, in trying to establish worthy charities to alleviate the suffering and famine in Europe.

“Society is sick….the one hope, the one remedy, is the pope.”

Talk about blowing one’s own trumpet.

Today saw Joseph Ratzinger depart from his Roman apartments, courtesy of the Italian Airfare by helicopter to Castle Gandolfo, set in the rolling Italian hills. Yet many suggest in all seriousness that he should have been escorted by the Arma dei carabinieri to the old Roman papal prison, a den once of murder and maiming, so favoured by previous popes, in eliminating their long-suffering victims, and to serve his sentence. It won’t happen of course, not in this fallen world.

Of course, he has long arranged with most Governments for diplomatic immunity that will protest him and others from crimes his church committed against so many, for so long. But there will be no special immunity coming on Judgment Day at the Great White Throne.

Always an ambitious priest he now vacates the throne room, with perhaps only his conscience left as a reminder that, “The soul that sinneth, it shall die.” (Ezekiel 18:4.) And this is a warning to all who subjugated and robbed so many children for so many years of their innocence and perhaps faith.

The recent scandals of the so-called “Vati-leaks” that ensnared the naive butler; the safe houses offered to protect predatory priests and their masters; the international money laundering, as well as the deception and deceit, are synonymous with his now-defunct eight-year reign.

Yet his victims seek justice for themselves and their families who still grieve, with many needing counselling for life.

Today there are numerous arrest warrants signed by international judges for the arrest of Joseph Ratzinger, charged with among other things: child transportation, child molestation and rape by others, and yet it is unlikely these Writs will be served on him or his fellow conspirators in their lifetime, but never say never.

Today those grieving victims still cry for justice, their families demand the truth about the cruelty administered by men and women of his church on their loved ones, with many alone and defenceless. As one remarked emotionally: “The pain never goes away.” And probably never will.

These men of the cloth were never going to usher in the coming Kingdom but rather through their idolatry and paganism have attempted to impede its arrival. Yet now is the time to be born again, to experience the new birth and the death of the old self.

“If any man be in Christ he is a new creature, old things are passed away behold all things are become new.”

Today so many abused children, with many now discarded and destroyed in their sufferings, will continue to inquire why their wicked abusers were allowed to escape retributions and for so long.

Yet the truth is not an important thread in the Vatican corridors, crypts and stateroom’s but God sees all and remember: “The eyes of the Lord run to and fro throughout the whole earth” (2 Chronicles 16:9.)

The Lord is never asleep and none should ignore these terrible warnings of what is to come, and perhaps very soon.

Joseph Ratzinger’s eight years are now ended but his crimes remain closed like weeping sores, others now concealed waiting to come to light. Today many of its cardinals and bishops stand accused in the dock of public opinion. But will many still have faith in the new man and his church who will be presented on the balcony to the people and the world. Probably.

The asinine discussion from Rome this week of who will wear the Prada shoes (does the devil really were Prada?) shows how much the media lap up this instant trivia. But who cares or listens as the world races to judgment and destruction.

Yet the sins of Ratzinger and others can be removed through the gift of salvation and that stain of sin will vanish through true repentance, there is no other way.

One day the Vatican will crumble as will all citadels of sin that suppressed the Bible and its teaching for so long. That approaching hour of destiny has still yet to arrive and maybe sooner than people think.

“How shall we escape, if we neglect so great salvation.”

I dedicate this article to those women who suffered at the evil hands of the Magdalene Sisters. They still demand justice for themselves and the dead girls they knew and loved and worked alongside in those notorious laundry rooms. Not a day goes by without them remembering the humiliation and cruelty and torture that was inflicted upon these children in Dublin’s so-called “fair city” over so many years ago by those wicked nuns, and for far too long. 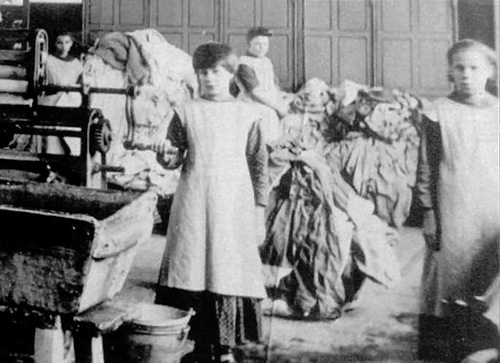