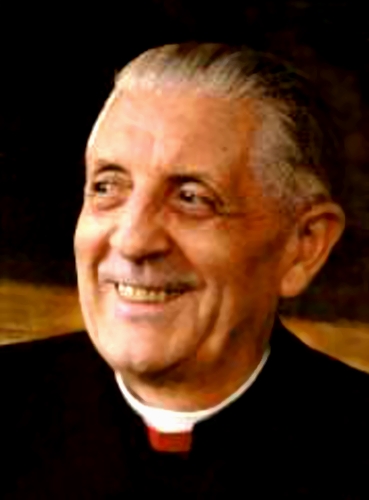 Leo Suenens certainly was the Vatican’s poster boy of the 1960s, and with much of the Second Vatican Council’s credit or discredit down to his personal promotion of a left-wing agenda, we have decided to include him in our series on infamous Prelates.

The Belgium Cardinal was a strong supporter of “Aggiornamento” or simply to bring up to date. This meant his church had to get with it. Or else! You see the success of the ecumenical movement and the demonic charismatic curse had yet to arrive with Rome’s full blessing.

However one controversial website, that claims to be in touch with “Mary,” states that Cardinals Bea, Alfrink, Willebrands and other German theologians, are now burning in Hell because it is claimed their open betrayal of the traditional Roman church (talk of Pope Paul’s impostor is also much quoted.) We would claim however that these men are probably in Hell for not trusting in Christ alone for their salvation. Therefore the gates of Hell welcomed them. And will continue to do so with many others arriving on the wide road.

Controversially his bones were disturbed this year (2010) when Belgium police drilled into his sarcophagus, apparently searching for evidence concerning child molestation, from the Belgium Hierarchy. Much of this scandal has smeared the Belgium church-and continues to do so. (Talking of bones, do see our video concerning Theresa of Lisieux and her sickly veneration.)

Suenens also claimed when promoting the gift of speaking in tongues that he had “the experience of speaking in tongues.” Wow more delusion here I suggest. And why do these people always have to have the star role? Suenens must be the first Cardinal to try and communicate in tongues, don’t you think….and who can understand them anyway?

In Malachi Martin’s book The Windswept House, the author apparently based the scheming Cardinal Swenson on none other than Leo Suenens….but then Martin had met them all hadn’t he during his long career in the Roman Curia and had no time for many of them.

Suenens would go on to push for the introduction of deacons, married clergy and an easing of his church’s teachings on contraception. Much of the Marxist atheistic dogma of the church’s Pax Christi movement can also be laid at his open door.

Always an egotistical man, the Cardinal enjoyed fame and awards during his lifetime but I can’t help feeling that the scandals of the Belgium church are coming out of the closet, with much of the blame being laid before Leo Suenens’ crumbling reputation.