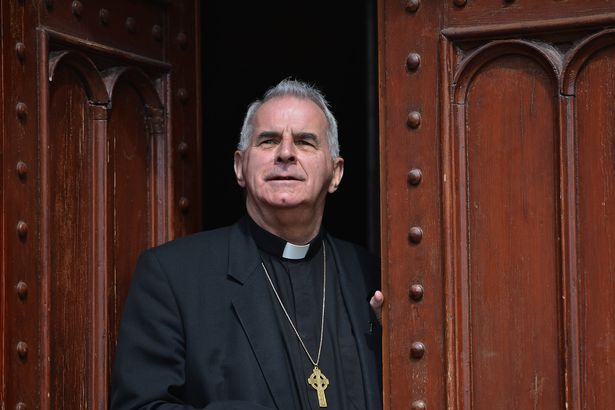 When pope Benedict announced his own surprise resignation, the same was repeated in Scotland, this time by cardinal Keith O’Brien, declaring that he too was throwing in the clerical towel. All very strange and all to be expected in these apostate end times that we are living through.

The announcement in a Sunday newspaper of serious allegations brought against him by three serving priests of “inappropriate acts,” must have forced his hand, possibly after taking legal advice. Yet he never issued legal writs against any of his accusers or they against him.

Such serious allegations never led to an investigation by the Scottish Constabulary. This story just died away!

Health reasons also may have hastened his resignation or further damaging revelations from the wings just waiting to emerge were two further possibilities. And it was also suggested that his fall from grace may have been an in-house character assassination, orchestrated by other clerics who had been patiently biding their time for such an occasion. Revenge, as they say, is sweet.

Keith O’Brien always seemed to court controversy since he became archbishop of Edinburgh in 1985. Maybe he just enjoyed it. His official opposition to same-sex marriage, which he likened to slavery is one of them; abortion on demand, he called murder; opposition concerning stem cell research from living foetuses was also in his sights, and all of this would allow the anti-Christian pressure group Stonewall to christen him “bigot of the year.” Well, well, so much for free speech, which in this country is slowly withering away, due to the dead hand of political correctness.

We urge all Catholics (clergy and laity) to forsake this false system, known as Roman Catholicism and seek salvation through the saving precious blood of Jesus Christ alone.

As regards to the late O’Brien, the once powerful cardinal of Edinburgh, it now seems his personal reputation is forever tarnished. But we at this ministry do not rejoice or gloat over such serious allegations.

New sordid details have been disclosed in a national newspaper concerning much of the sexual inclination of trainee Catholic priests in Scotland in the 1980s. Mentioned was made about the St Andrew’s seminary, where it seems until its closure in the 1980s, drunken raucous homosexual behaviour seemed the norm to many young men studying there. I do wonder how the rectors of other seminaries, especially in England and abroad dealt with similar occasions. And on a personal note, I do resent the use of the name of one of the original apostles being used in this context.  It now seems some of the alleged sexual assaults inflicted upon young men by O’Brien caused resentment and plotting of revenge against the cardinal by the so-called “gay mafia.” And it seems they got what they wanted, his resignation, and Rome it seems did not jump to his defence.

Yet in a newspaper interview printed on 3.3.13 one of the still-unnamed men, an ex-priest, is quoted as saying that: “People are trying to hunt you down.” Now this sounds serious and perhaps a police matter if true, and he further goes on to say: “I am as sinful as the next man.” Well very true but we are all sinners, you know, cardinals or caretakers, it makes no difference. “All have sinned and come short of the glory of God.” O’Brien issued a carefully and diplomatically worded statement, in which he said: “I wish to take this opportunity to admit that there have been times that my sexual conduct has fallen below the standards expected of me as a priest, archbishop and cardinal.” He went on to say: “I will now spend the rest of my life in retirement. I will play no further part in the public life of the Catholic Church in Scotland.” We at this ministry would say to those anonymous clerics and one ex, forget the Catholic church or of any future papal reforms, forget it and get out of it now! These allegations will continue to roll in like the old covered wagons of past western movies, only this sordid saga isn’t a movie, it’s for real, not to mention, millions of souls around the world, are trusting their eternal souls to this system, so the cavalry isn’t about to ride in on the horizon, with guns firing.

According to the Scottish Daily Record newspaper, it appears that the Vatican ordered him to vacate his Edinburgh official home and relocated to Dunbar. The Vatican also wanted him to quit Scotland altogether and go quietly but he has refused. He was reported as saying: “It has been quite a humbling experience.”

According to The Daily Telegraph, he has been ‘ordered’ to leave Scotland, apparently for two months. A Vatican spokesman said: “It is for spiritual renewal, prayers and penance.” But he really ought to get out of this religious system altogether, otherwise, he’s on a treadmill going nowhere fast. In the past, so many of these disgraced bishops have dropped off the church radar, never to be heard of again.  It remains to be seen if Keith O’Brien does play clerical ball with the Vatican curia or if he finally becomes is his own man because it’s never too late for the sinner to repent.

O’Brien is unlikely to return to Scotland reports The Daily Record. This is also confirmed by Leo Cushley, his successor. Of the cleric’s whereabouts the remains unknown, perhaps it is suggested, he now resides in Italy or one of the Greek Islands.

According to The Daily Record the sex-shamed cardinal is now living in a detached bungalow across the border in England, valued it seems at over £250,000, and owned by the present archbishop of Glasgow; all very strange! This was O’Brien’s old seat you might remember. Local villagers seemed unaware of who he is or what his past history was; so much for retiring to a monastery to ‘repent and pray’ as we were first informed would be happening as part of his clerical “punishment.”

News from Rome reveals that the pope is to allow the disgraced cardinal to keep the ridiculous title of “your eminence,” and to “live a strictly private life,” whatever that means. We have long said that these titles that so many of the clergy heap upon themselves so quickly are neither Biblical nor necessary, but rather done in vanity and conceit. O’Brien resigned in shame because of his sexual appetites and this to us is a kick in the face to his still suffering victims, with many still feeling the pain and shame of what happened to them. If he has any decency he will say, “No thank you, just call me Mr. O’Brien instead,” and I’m sure some of his victims might just appreciate this simple gesture from the man, who it seems is still being dictated to from Rome of what he should or should not do. We say get on your knees Keith, repent, and become washed in the precious Blood of the Lord Jesus Christ; it’s never too late.