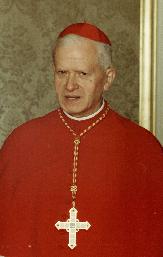 This disgraced Austrian cardinal was responsible for sexually abusing young boys and monks going back some thirty years or maybe longer.

Groer, an ultra-conservative, had succeeded the charismatic liberal cardinal Koenig as Archbishop of Vienna in 1986. He was it seems the pope’s personal preference for the job and not it is suggested the local bishop’s choice. This would forever rankle with them in this whole sorry saga. Hermann Groer had as a matter of fact been ordained in 1942 by cardinal Theodore Innitzer. So he was so to speak in the clerical “loop” for the top job.

When the allegations of sexual misdemeanours surfaced in the late eighties and mid-nineties, the Catholic hierarchy quickly called them:

“A conspiracy against the church.” Well, they would wouldn’t they?

Later when the revelations refused to evaporate into the famous “Vienna Woods,” four senior Austrian bishops, including the cardinal’s future replacement, the young Christopher Schonborn, would confirm that allegations of paedophilia against Groher, “are in essence-true.” Now that must have been painful to admit, don’t you think?

But what did the culprit have to say about his shady conduct? Well, he asked for forgiveness. But that’s about all.

In 1995, he finally resigned in disgrace to be replaced by the popular cardinal Schoenborn.

Immediately sealed orders from the Vatican, would dispatch Groer into permanent exile-to a waiting and obliging monastery-somewhere in Germany. The last place for a man of his tastes to be deported to I would have thought!

And incidentally, there would be no prosecution charges levelled against him by the State. The case it seems was conveniently closed.

He died in 2003. And his death was announced to the people of Vienna by the tolling of the famous “Pummerian” bell from St. Stephens Gothic edifice.

Today he is buried in the Cistercian monastery of Marienfeld in Austria. Dying as far as we know an unsaved man. How sad for him.