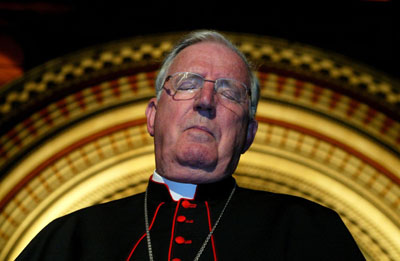 The death today (1/9/17) of Cormac Murphy-O’Connor still leaves a gaping hole of his weak and pathetic handling of the sordid case of priest Michael Hill in 1997 and will always be part of his damning legacy we suggest.

We did argue at the time that he should have resigned but of course, cardinals don’t do this do they.

The Catholic church continues to have many sordid sexual scandals like this waiting to be resolved with thousands of victims still seeking justice. Cardinal George Pell and the catholic church’s cover-up of child abuse in Australia is just one that will be aired publicly in October at his trial this year. Sadly so many priests like both of these men are still serving in this apostate church and will continue to go their own unholy way all ending up on that wide road “that leadeth to destruction” (Matthew 7:13).

We urge all Catholics and clergy to renounce the wicked church of Rome and become born again. Our current Bible tract and banner warns that “except ye repent, ye shall all likewise perish” (Luke 13:3).

In an interview Murphy-O’Connor gave to a London newspaper a decade before his death he touched on the appalling decision by the Blair Government to coerce Catholic adoption agencies to place Catholic children to enquiring homosexual couples; he claimed that he would shut down such adoption homes before submitting to Government pressure.

Some suggested this as a blackmail tactic from him and his church. “I don’t do blackmail. I’m my own man,” he claimed with conviction. “My priority is the children,” he insisted adamantly.

I would like to come back to that remark later!

He also discussed Tony Blair: “I haven’t talked to him about his conversion. I have chatted to him about religion. A person’s religion is a private thing.”

(Blair later converted to Catholicism in 2007).

Murphy-O’Connor also hinted at looming retirement by saying: “To be absolutely honest I would be content to retire. But if asked to stay on I would be content.” But to an interesting question about failure in his life, he responded: “I don’t think any failures as such. Sometimes a failure of courage.”

But wait a minute, didn’t he earlier say: “My priority is the children.” He did didn’t he? And somehow these five words struck a discord with me because I was further reminded of the damaging child sex scandals of the his church that have been exposed both in England and abroad!

In England today the shame however is still there to touch and taste, as afflicted families struggle to fight the consuming torment and rage of priestly abuse. (We should not forget how nuns were also named in these sordid scandals).

Do you remember “the sisters of mercy” episode in Ireland and what they were doing to unmarried girls in the catholic church run laundry episode during the 1940-1960 era)?

One such public case some years ago was of the systematic abuse by Catholic priest Michael Hill committed over many years, even with boys in wheelchairs! Or as one father remarked of this sordid event: “I feel livid towards him.” I am sure that parent wanted to say much more than this. Perhaps even do much more.

And all of this was in the Catholic diocese run by the then bishop Cormac Murphy-O’Connor!

In Revelation 17, we see a woman described as “full of the names of blasphemy.” I suspect this vivid description is indeed the Roman Catholic church. And in chapter 18, a voice from heaven is heard saying: “Come out of her my people that you receive not of her plagues.”

So, if you are a practicing Catholic or a member of the clergy then heed these final words from the Lord Jesus Christ Himself!)

And do you remember in recent years how two senior catholic archbishops in England were forced to resign under a dark cloud of child molestation. (In fact, this week a priest from the Birmingham diocese will be in court accused of seven acts of sexual assault and rape. And so it goes on and on and on)!

I have to ask in all fairness was his first priority towards the innocent children in his pastoral care. Or did it all become an exercise of ‘damage limitation’ from him and many others in the hierarchy of bishops when details started to leak out to the national press. Sadly it seems the catholic church’s first antecedence is to themselves and their church, and of course its future survival.

Did Murphy-O’Connor suffer a failure of courage in those previous days (however flimsy) as he placed wicked priests in other parishes, thereby placing more vulnerable children in harms way?

I fear this story is not ended yet with even more shocking details to emerge!

Oh and the title of this article? Well some years ago on a popular radio show he was reminded that whilst rector of the English College in Rome he certainly mixed a mean Martini. I know little or nothing about Martini cocktails, but I did read some peculiar names given to these potent alcoholic drinks. And one can be quite sure that were he is now, there are no cocktails whatsoever!