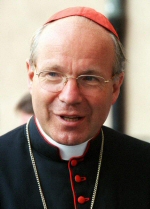 Cardinal Christopher Schoenborn is the current and rather popular leader of the Catholic church in Austria.

Chosen by John Paul II to replace the disgraced Cardinal Groer, who was eventually removed over assorted sex charges, the young Christopher has moved steadily in the Vatican Crosscurrents of theology and diplomacy.

Like the present Pope, he also has his own spoof website. And the two men also seem to have formed a close working personal relationship as well.

As a member of the Dominican Order, it is most unfortunate that the young Christopher chose this religious brotherhood as a future vocation. One only has to remember the terrible Inquisition and the loyal Dominicans who spearheaded its massacre of millions of innocent people. This scandalous episode in the Catholic church should never, and will never be forgotten.

I also suspect in any future papal election Christopher Schoenborn, rather like his predecessor the late cardinal Franz Koenig, will be an important pope maker in helping to select the next one.

Also as an outside bet, Schoenborn has the possibility of picking up sufficient votes in a future deadlocked conclave.

In contemporary circles, he seems rather to favour the fad of ‘intelligent design’ and like pope John Paul II, supports evolutionary trends to be incorporated into his churches teachings on the issue.

On the question of evolution he recently replied rather ambiguously that:

“The question of origin (whence do we come) is inseparable from that of life’s goal (where do we go.”)

But doesn’t the Bible in Genesis open with:

“In the beginning God created the heaven and the earth.”

Oh, I do wish these theologians would read and believe the Bible more often!

In 1989 the publication of the new ‘Catholic catechism’ was announced. Schoenborn had been appointed Secretary of the drafting committee, then under the strict supervision of Cardinal Ratzinger.

Recently some controversy has attached itself to Schoenborn’s PR image. It was learned that homosexual couples were being given a personal blessing in his Cathedral by one of the priests on the staff. Later this was qualified by the chancery to offering only individuals who requested it and not couples an appropriate religious blessing. This could be the tip of the iceberg for future same sex weddings perhaps?

Schoenborn’s continuing influence in Catholic teaching and dogma clearly place him in an important position for any future dictates still yet to be announced to the laity. Given also the significant reality that he is still rather young, he could in theory be around a long time yet.