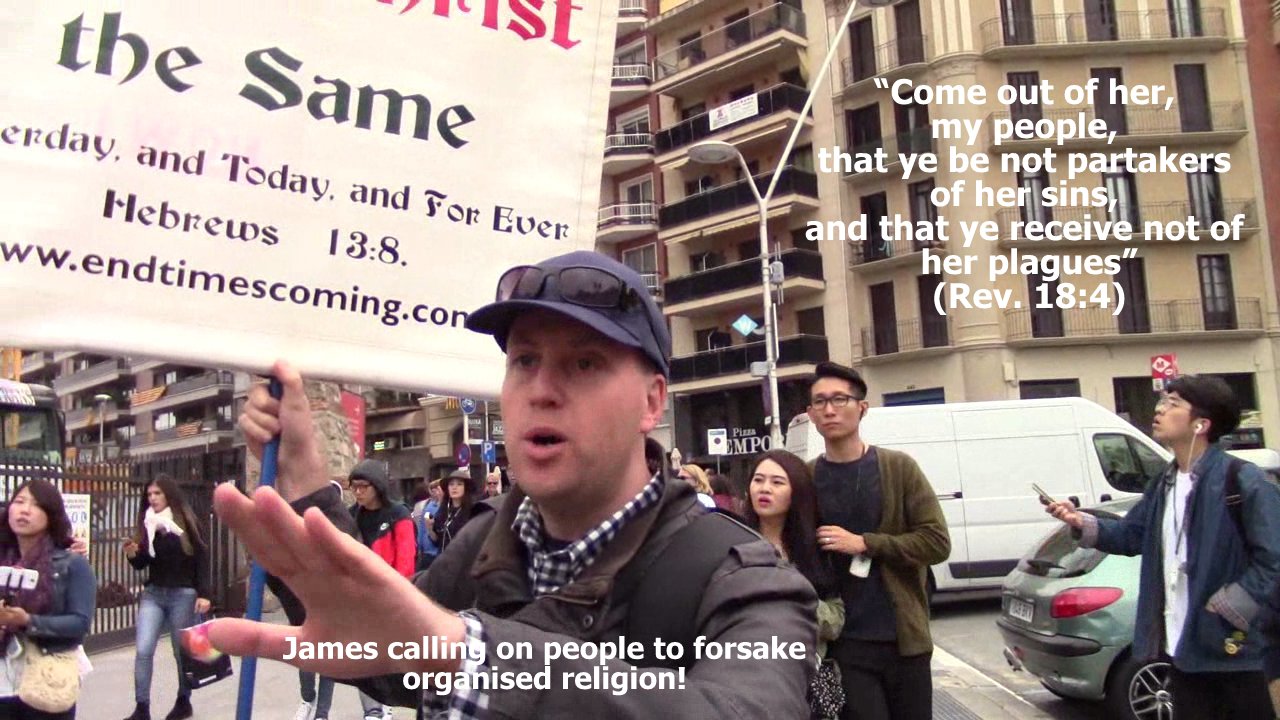 Patrick, James, and sister Tantri left Manchester airport for one of our most successful outreaches in many years. However, Patrick fell ill, and was forced to return to the UK. But by the grace of God, his regrettable absence did not stop the pace and scope of the outreach, with some of the following accounts recalled by sister Helen.

Cerdanyola: We talked with a Muslim who seemed to know a little about the Bible, but couldn’t accept the idea that Jesus Christ was God and that His death on the cross was the only way to be saved. Many tracts were given at the local train station to the lunch crowd. 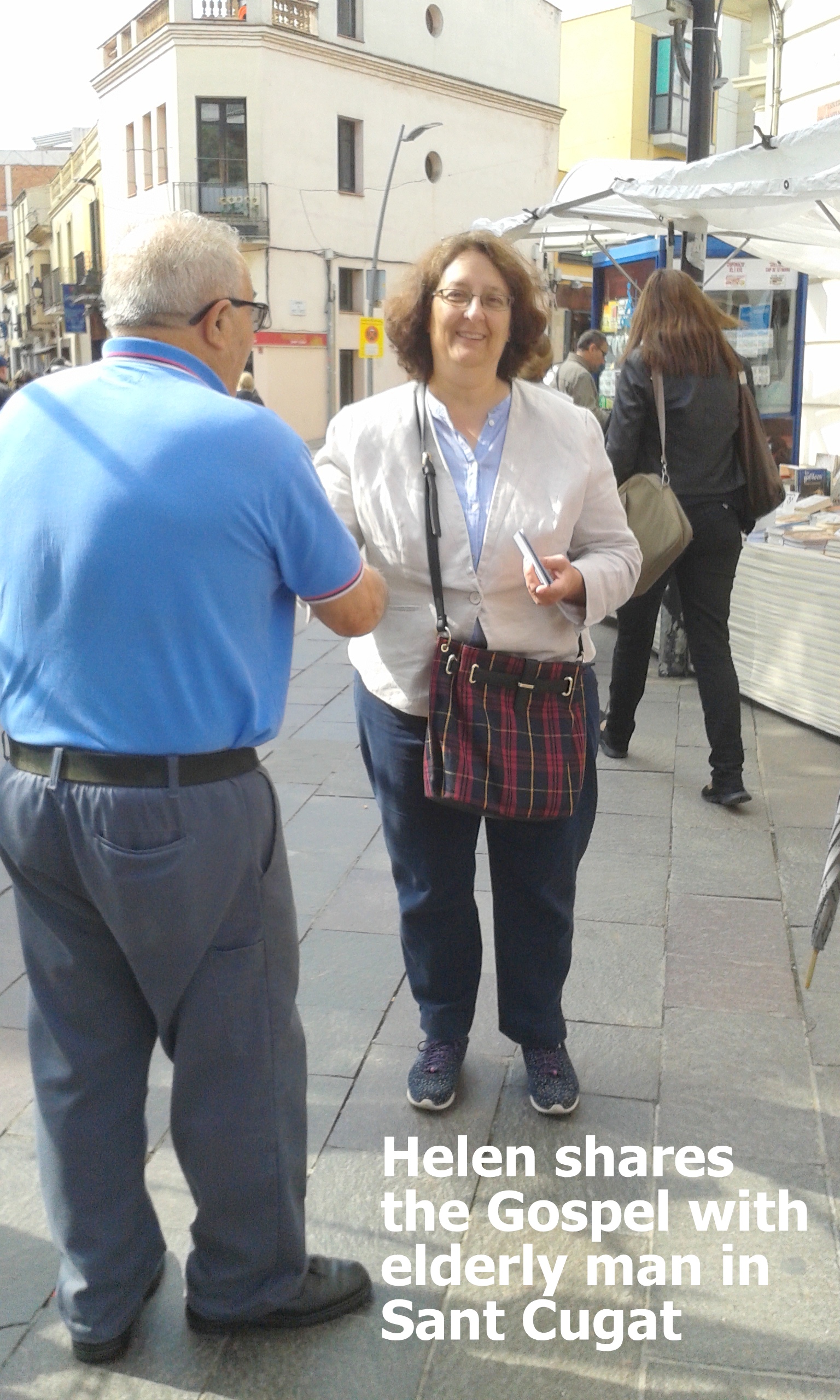 Rubí: Many tracts were taken, including by many Muslim women. One rejected a tract from Tantri after reading it. James letter-boxed the market stall mail boxes. Later we returned to Sant Cugat, where we had good reception. 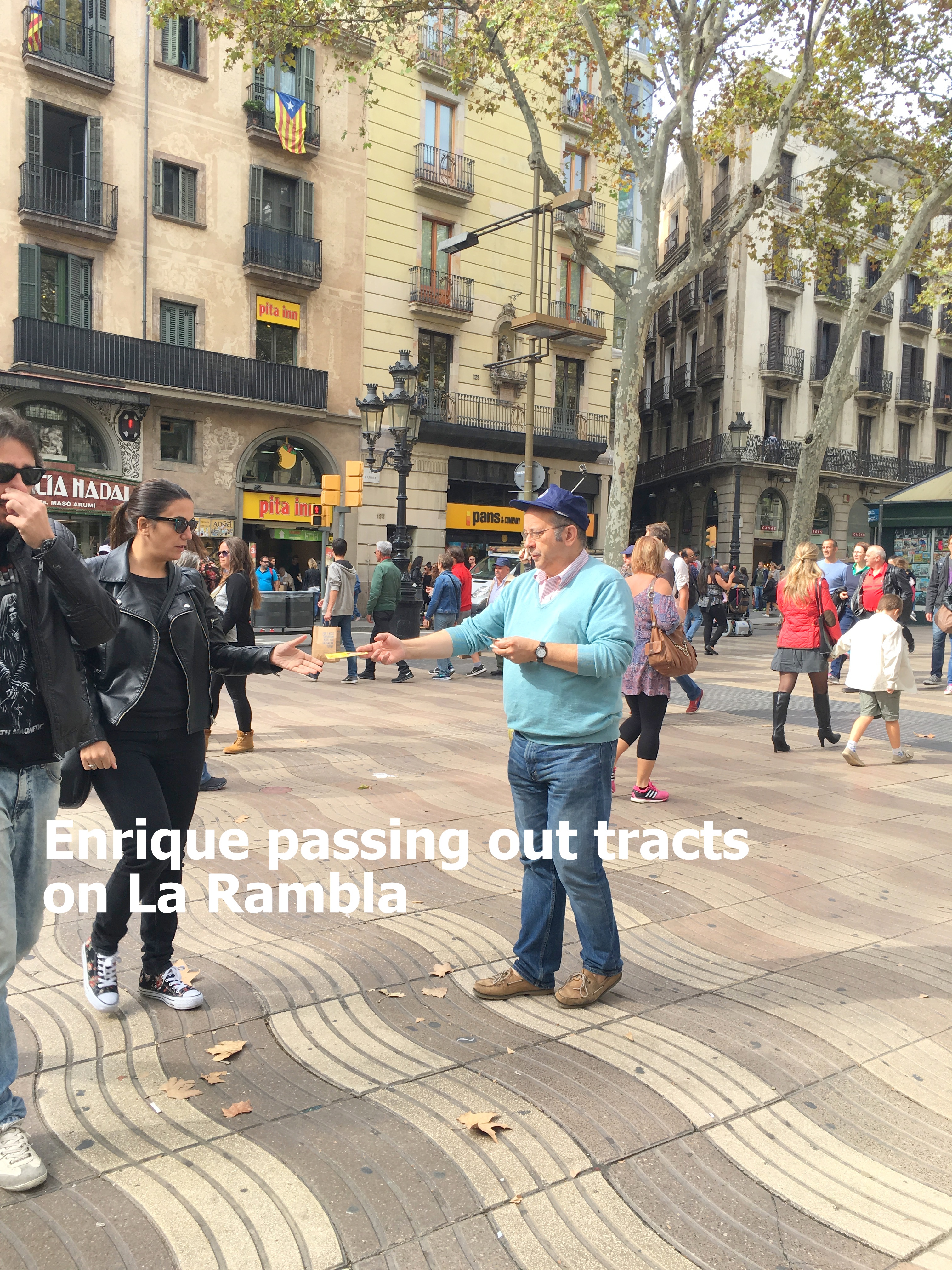 La Rambla: We passed out many tracts to tourists strolling along La Rambla and by the market, then also distributed tracts in Plaça Sant Jaume and in the Gothic Quarter without any problem despite a police presence. Distribution was also good in the square in front of the Barcelona cathedral. Tantri and Helen gave some food to a homeless man, which others noticed, then we went back to La Rambla for more. The police stopped Tantri in the last minute of our outreach there and said tracting was not allowed and that a permit required. We told him we had checked and we understood we were within our civil rights, at which point he walked away and disturbed us no further. 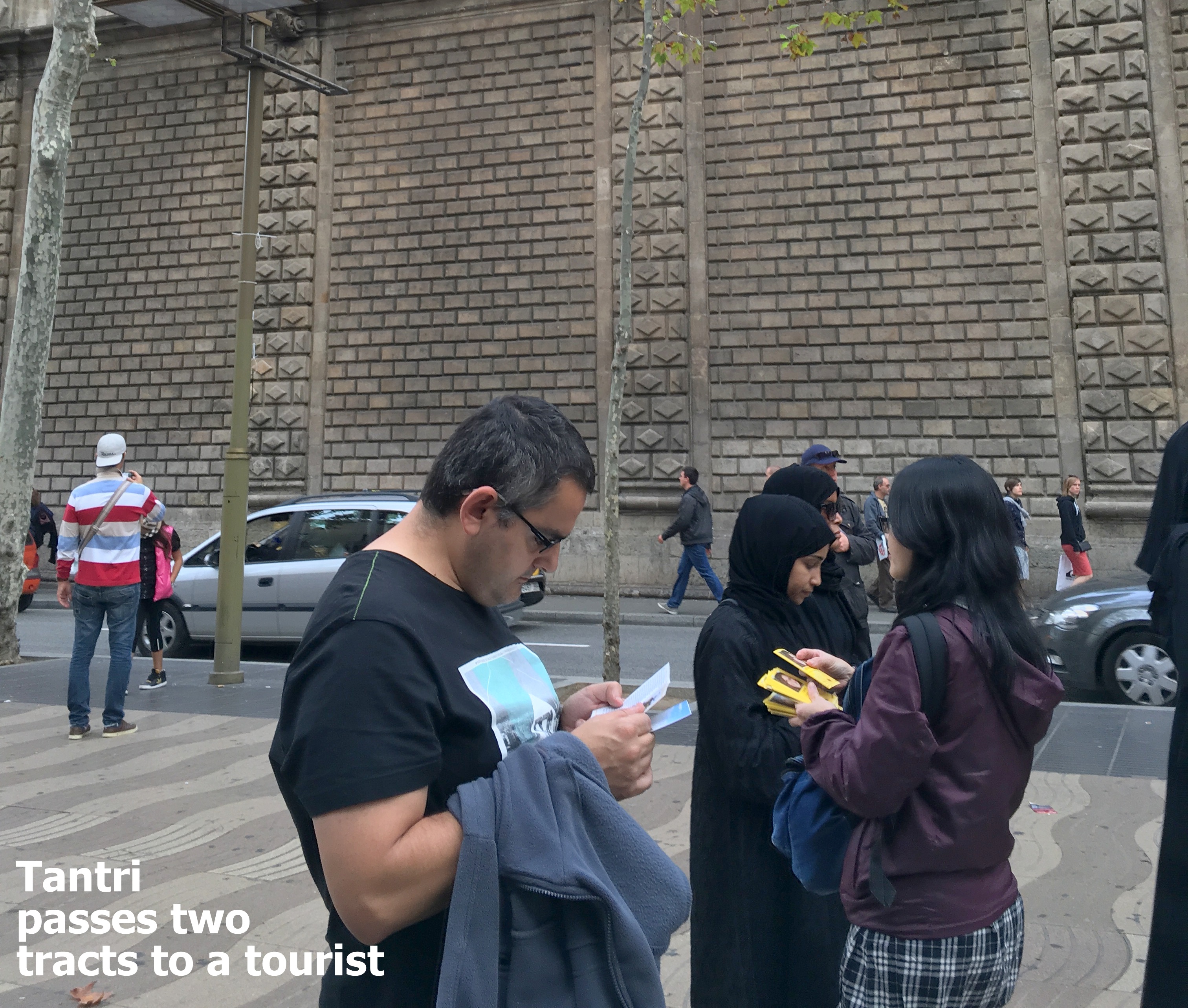 In Plaça Espanya, the banner was used for the first time, with very good acceptance of tracts by young families coming out of a kids’ event. Several young Muslim kids clashed and argued with James over Jesus being the Son of God. On a more encouraging note, several Christian kids encountered Helen (sang to her and recited John 3:16), while one of their mothers’ happily beamed a few feet away. James and Helen had two very long and great conversations with two different groups of local Jehovah’s Witnesses.

City of Tarragona: We distributed some tracts but there were not too many people around the Roman ruins. There were a few crude comments made by people toward us. 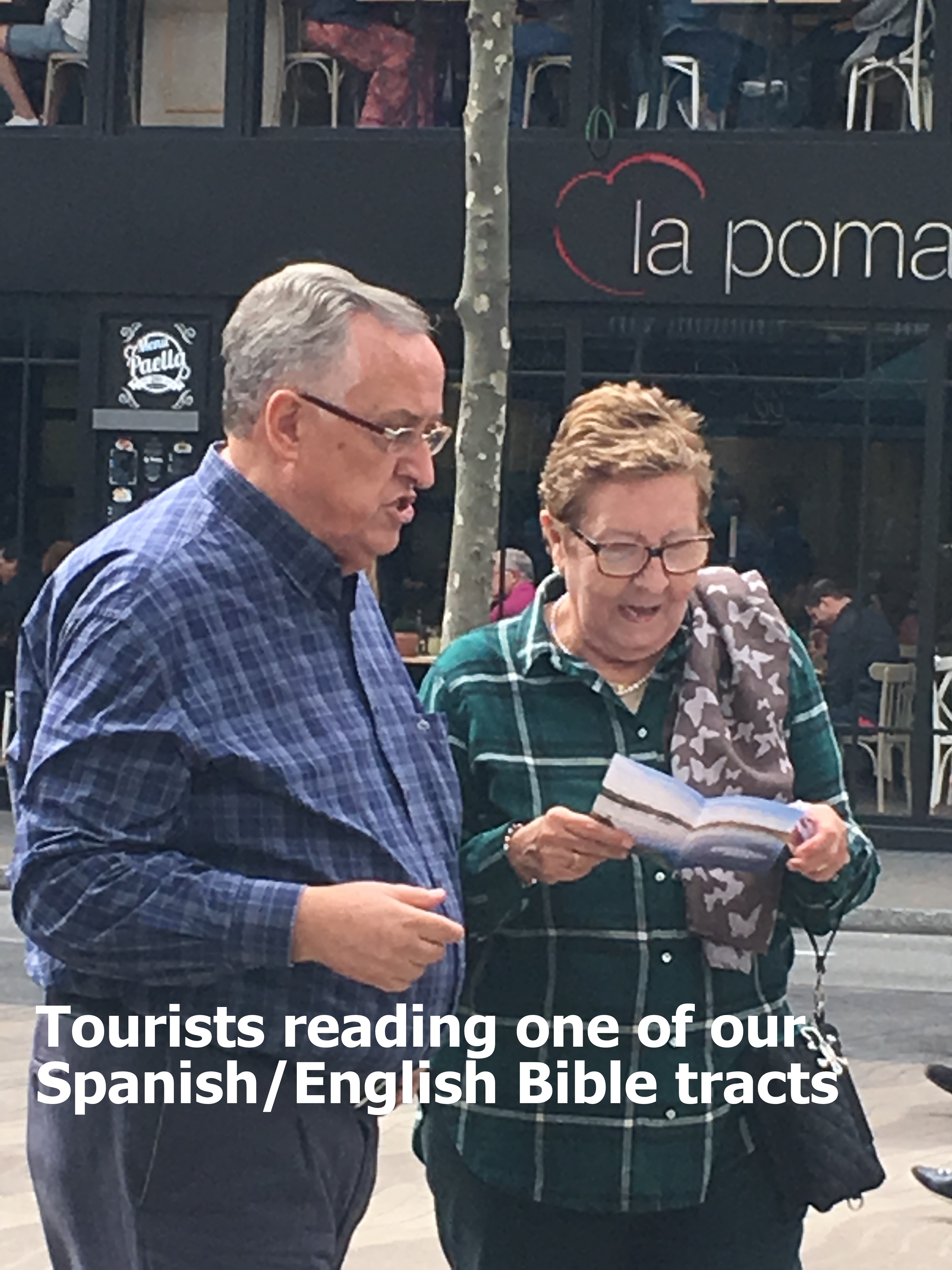 Sagrada Familia: Enrique was stung on the hand by a tiny and unrecognisable insect! James held the banner and street-preached. Many tracts were given out, but there was considerable coldness from tourists. The atmosphere felt mentally heavy and the weather was later rainy; almost everyone was a tourist and there were hardly any Spaniards around. The police stopped James and also watched the entire group afterwards in an attempt to catch us passing tracts. It soon started to rain, so we left and went back to Sant Cugat, where we had good reception of tracts but fewer people around (throughout the outreach, this town had the best reception). 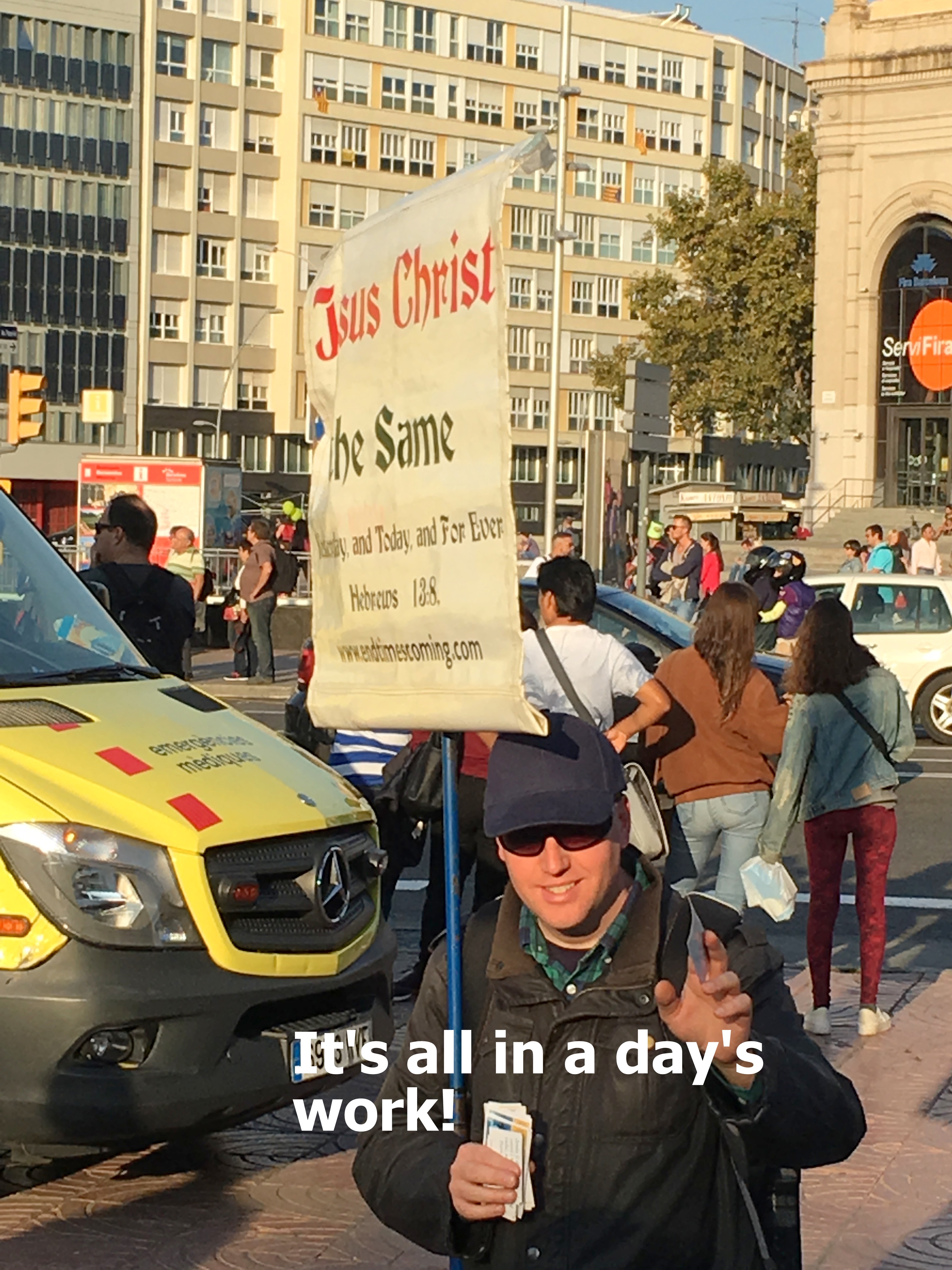 We estimate that over 13,000 tracts were given out during our outreach. A great result indeed, and God willing, we will be back in Spain next year, with a new multilingual banner, and different multilingual Bible tracts.

On our return to the UK, however, our ministry sign of over 10 years, “mysteriously vanished.” James put in a missing claim at the airport, and we were then kept waiting for five long days, before it was finally found and delivered to James via a local courier.

Certainly a strange thing to happen, especially after such a wonderful outreach, but no doubt this was the devil’s final attempt to get back at us. 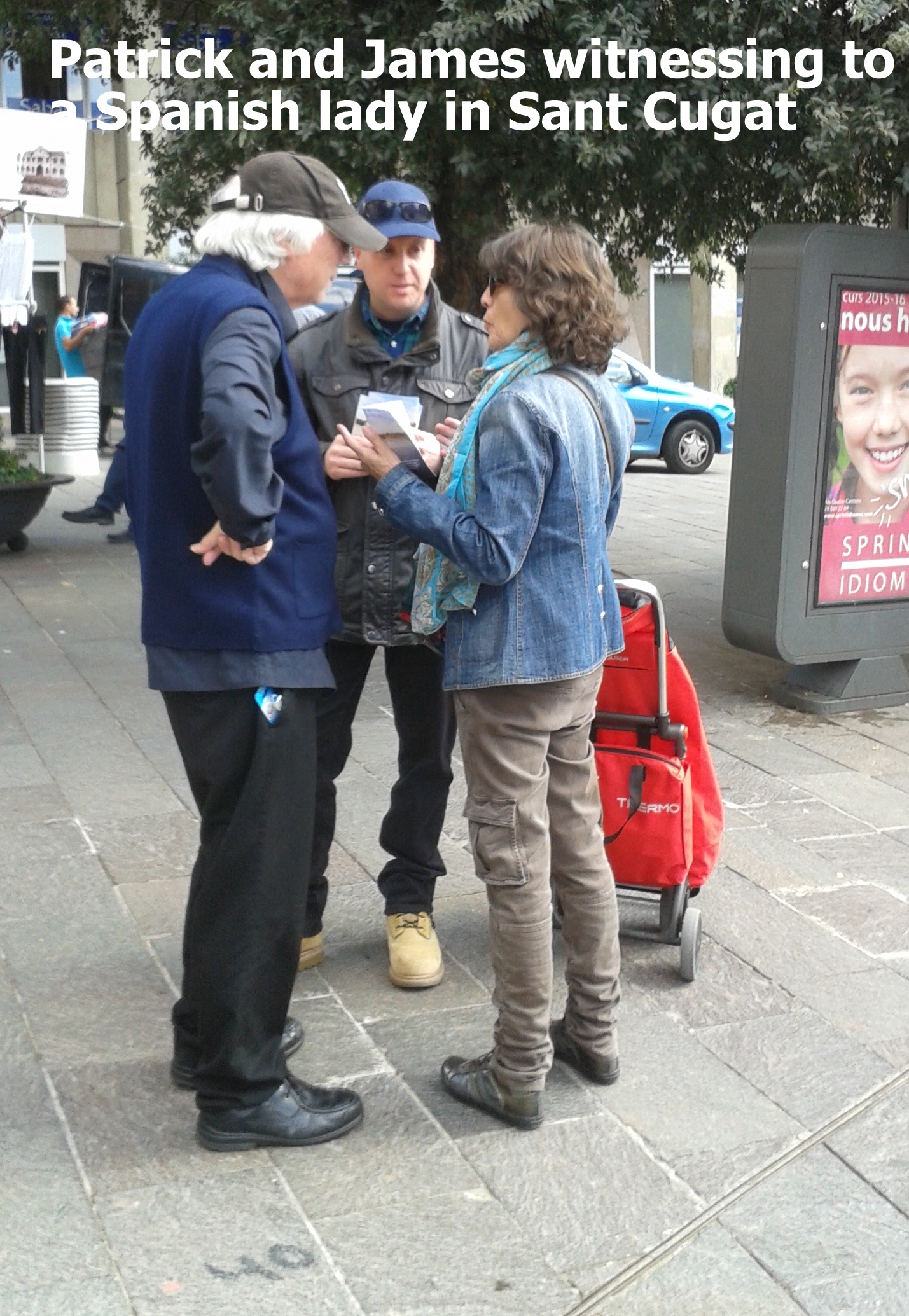 All in all, it was a real blessing to do this outreach. Of course, it is true that we are unlikely to see any of these people (mostly tourists from the world over) again, but our aim was to plant seeds of the gospel message and the word of God among people who will probably not encounter them elsewhere. Truly, we can say that is “God that giveth the increase” (1 Corinthians 3:7).

All praise and glory must go to the Lord Jesus Christ! Amen and amen!

and religious alike. The Lord has been convicting me to go out in my town and do the same. Please pray that He enables me to do this and that He grants me a spirit of boldness and compassion. I feel I’ve been lukewarm for too long. Partly because of situations in my life that have been crippling my self-esteem, but I want to stand before Jesus without excuse and be seen as a faithful servant.  Thank you and may the grace of God continue to abound with you all!”