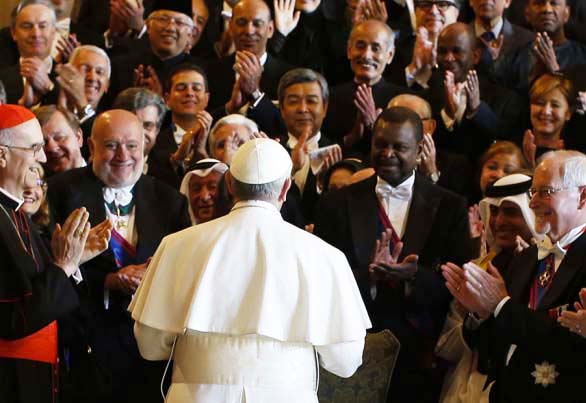 It rather looks like the conservatives of the Constantine church have been neatly elbowed out of the coming synod, to be held in Rome, next year, by pope Francis.

The new motto from this pope seems to read, “live better now and help often.” And, oh yes, ‘love flowers, children and animals.’

This pope, of course, is a practising liberal and as an ordained Jesuit he is committed to social works, or Marxism by any other name for Catholics of his church to gain an ‘expected place’ in Heaven. But of course, Rome is the Harlot of Revelation isn’t she, and this should never be forgotten by students of the word of God.

It was also confirmed how the Vatican is “not concerned” about the recent NSA phone listening/tapping scandal, but then their own intelligence network was probably designed and introduced to them by the NSA/CIA experts, and with over 80 billion euros in their own bank, which is one of the largest private banks in the world, they can certainly afford the best from the IT catalogue, can’t they.

However, the coming ‘open synod’ for next October will it seems discuss, marriage, divorce and ‘personal commitment,’ which is rather rich seeing, for, as far as I know, none of the gathered 2,000+ bishops have ever sampled married life. But I could be wrong about this assumption!

The thorny subjects such as atheism when it’s raised is answered by the pope, when he remarked, “who am I to judge.” Francis speaking this ridiculous attitude reveals just how far the liberal agenda has taken hold in Rome, not to mention most of organised religion too. Also on the agenda, as well I suspect, will be same-sex marriage, abortion and possibly married priests. And again what will we hear, “who am I to judge” or ‘let’s go easy on these controversial subjects shall we.’

This is, of course, the current theology now being drip-fed from Rome to the media and the masses, not only from the whore but also from her daughters as well.

Also to be discussed is youth unemployment and the loneliness of the forgotten ageing population of the world. This all seems rather like a social workers conference does it not. No plan of salvation here!

The Holy Bible naturally and its timeless teachings seems, as usual, to be ignored and relegated to ‘science fiction’ through Hollywood, but what can you expect for a non-Bible-based religion we suggest.

What is interesting to us at Ex-Catholics For Christ is the idea mooted by the pope’s new Opus Dei spin-doctor that future women, could be named in the next Vatican consistory, of newly named cardinals. Several names have been mentioned, most seem to be liberal feminists (why am I not surprised) but will they be allowed into the Sistine Chapel, with their pink mobile phones and Prada shoes at some future date, to finally vote in the next pope.

I remember a popular feminist politician once shouting to the assembled Senate in Washington, some years ago, saying as she waved a broom above her lacquered head, “It takes a woman to clean the house,” and boy would the women like to clean out the Rome’s secret stables. But so far, no ordained women priests as yet, but perhaps a cardinals red hat (or pink in their case).

We do wonder if this is a sop towards the women/feminism agenda now waiting on the outskirts of Rome, rather like Attila the Hun, or does this Argentine pope have another card up his cassock. Oh, and where are those feminists lawyers we see so often in the media, shouldn’t they be calling or demanding far more opportunities for the ‘sisters’ to be admitted into this male-dominated ‘church.’ But I notice it’s all very quiet on that front isn’t it, with not a peep out of them. I wonder why! Is it perhaps that so many of them are Catholic themselves.

Seriously, all of these broken strands of society will have to be stitched together and brought under Rome’s future control as we have said before for a future orchestrated Vatican III. Only then, will you see journeying to Rome popular Oxford academics, rugged film stars, with political pop stars wearing ‘shades’ and assorted do-gooders bringing up the rear! And I suggest they and the bishops and cardinals and the pope will get on like “a house on fire” over martinis and pasta, and sadly this is where most of them will end up in the coming lake of fire. How sad because Jesus said, “I tell you, Nay: but, except ye repent, ye shall all likewise perish” (Luke 13:3).

But of course, these men and women have their own Satanic agenda that will one day end in doom and destruction for them, and many like them. How tragically sad because they seem to forget or ignore that, “He that hath the Son hath life and he that hath not the Son of God hath not life” (1 John 5:12). It’s as simple as that. Seek and ye shall find eternal life, but ignore it and you shall perish forever. It’s your choice!

Incidentally, one prominent senior cleric, causing a lot of interest in the media at present, and a possible future pope we suggest, has on his personal coat of arms, I noticed recently, the depiction of a serpent. A very unusual symbol to be associated with, and we will, of course, be watching this man’s future career with interest.

Of course, the two prominent entities to soon enter the world religious stage in the coming future will be the unholy alliance between the antichrist and the false prophet. It’s all very creepy I know, but predictable for these end times that we are living through and witnessing in our own lives.

Oh, and the recent announcement from the Vatican, how the supposed ‘bones of Peter’ will go on display in Rome next year is false (fake news). Peter never went to Rome nor is this recorded in the New Testament. It’s not even eluded to by Paul in his letter to the Romans either. This is yet another popular myth that has somehow become fact and should be discouraged and discarded.

So, keep looking up because the Lord is coming and remember: “For the Lord himself shall descend from heaven with a shout, with the voice of the archangel, and with the trump of God: and the dead in Christ shall rise first. Then we which are alive and remain shall be caught up together with them in the clouds, to meet the Lord in the air: and so shall we ever be with the Lord” (1 Thess. 4:16-17).

Are you saved and ready to be with the Lord? We certainly hope so!

This summer and early autumn God allowed us to experience a very spiritual and rewarding street ministry outreach of which we truly give Him thanks for.

Along with ourselves, and visiting us were Tantri, Eric and Martin, and with their cheerful assistance, we were able to visit 8 towns, distributing over 2,500 of our Bible/postcard tracts, and many other testimonial ones as well, which are always very popular to people to take and read. They are basically icebreakers of course and can sometimes lead to some very deep discussions, with enquiring people in this lost world.

We spoke to dozens of people and our distinctive banner was seen by thousands from buses and trams and elsewhere, I’m glad to report. We were also able in Leeds on to give away over 90 DVD’s, some being James’ Bible studies and some by Trevor, and in the heavy and cold rain as well!

I cannot thank our dear friends enough for the enthusiasm and dedication that they brought in helping to make this street outreach a great success for all of us, and next year we hope, God willing, to offer 5,000 tracts and scores more of DVD’s if possible.

“And the Lord said unto the servant, Go out into the highways and hedges, and compel them to come in, that my house may be filled” (Luke 14:23). 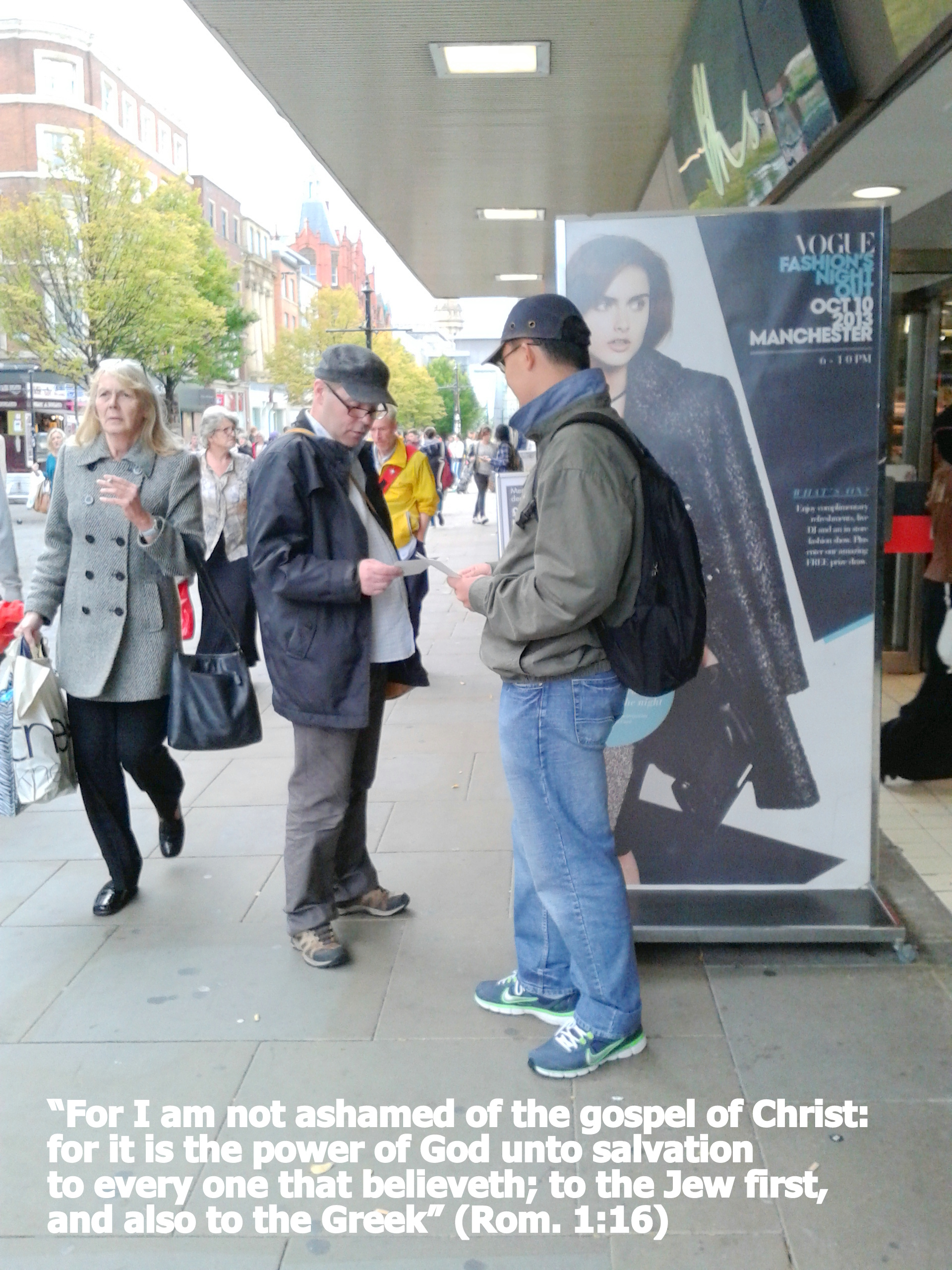 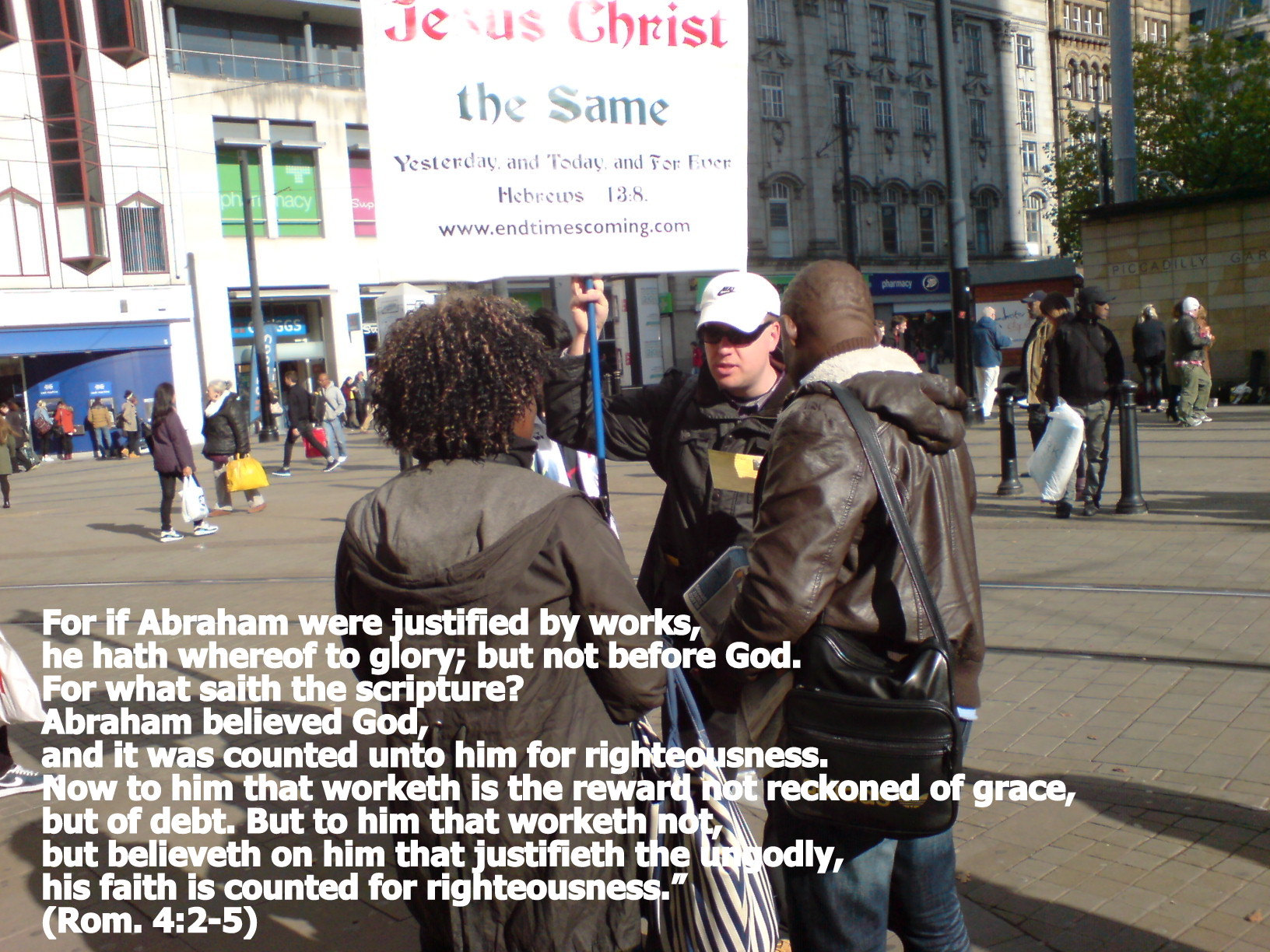 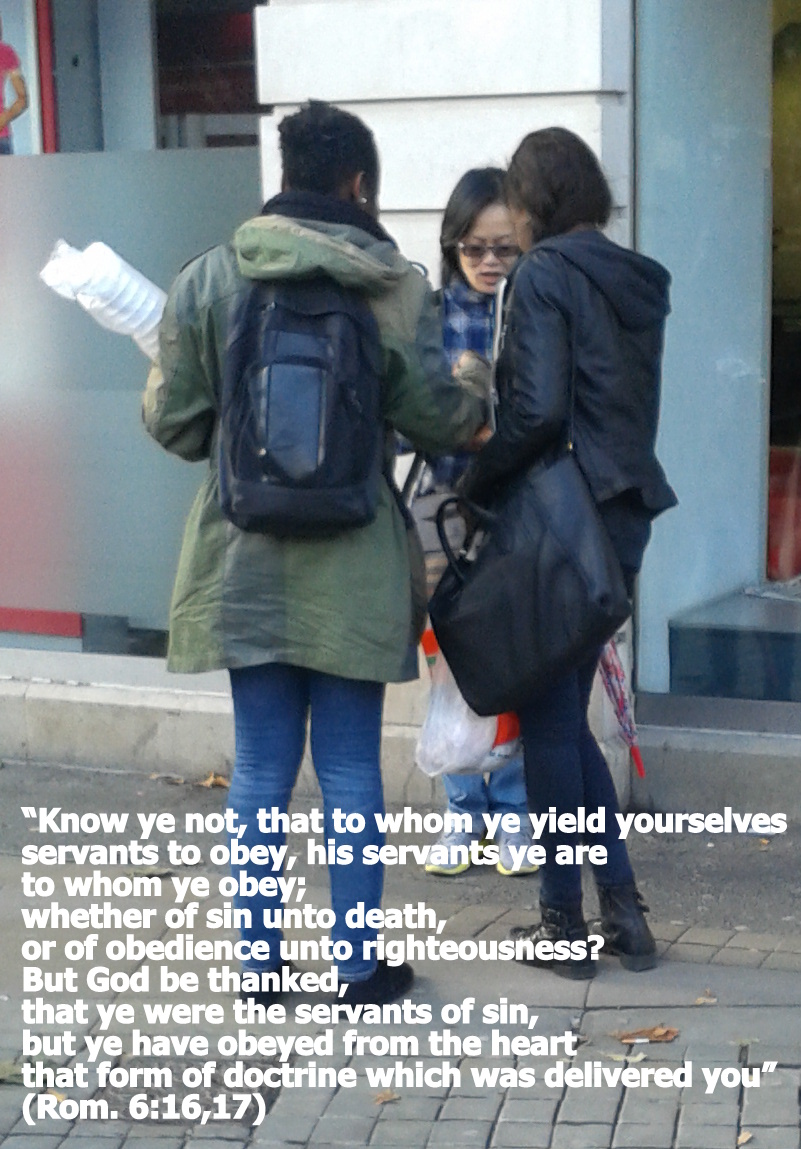 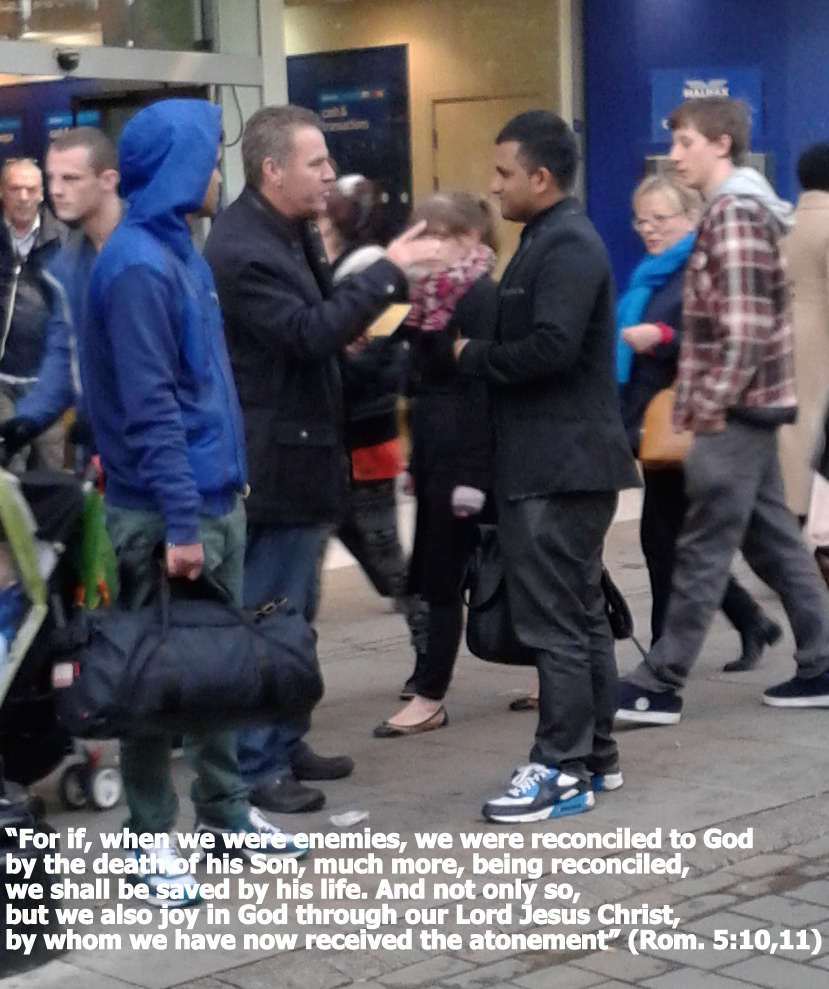 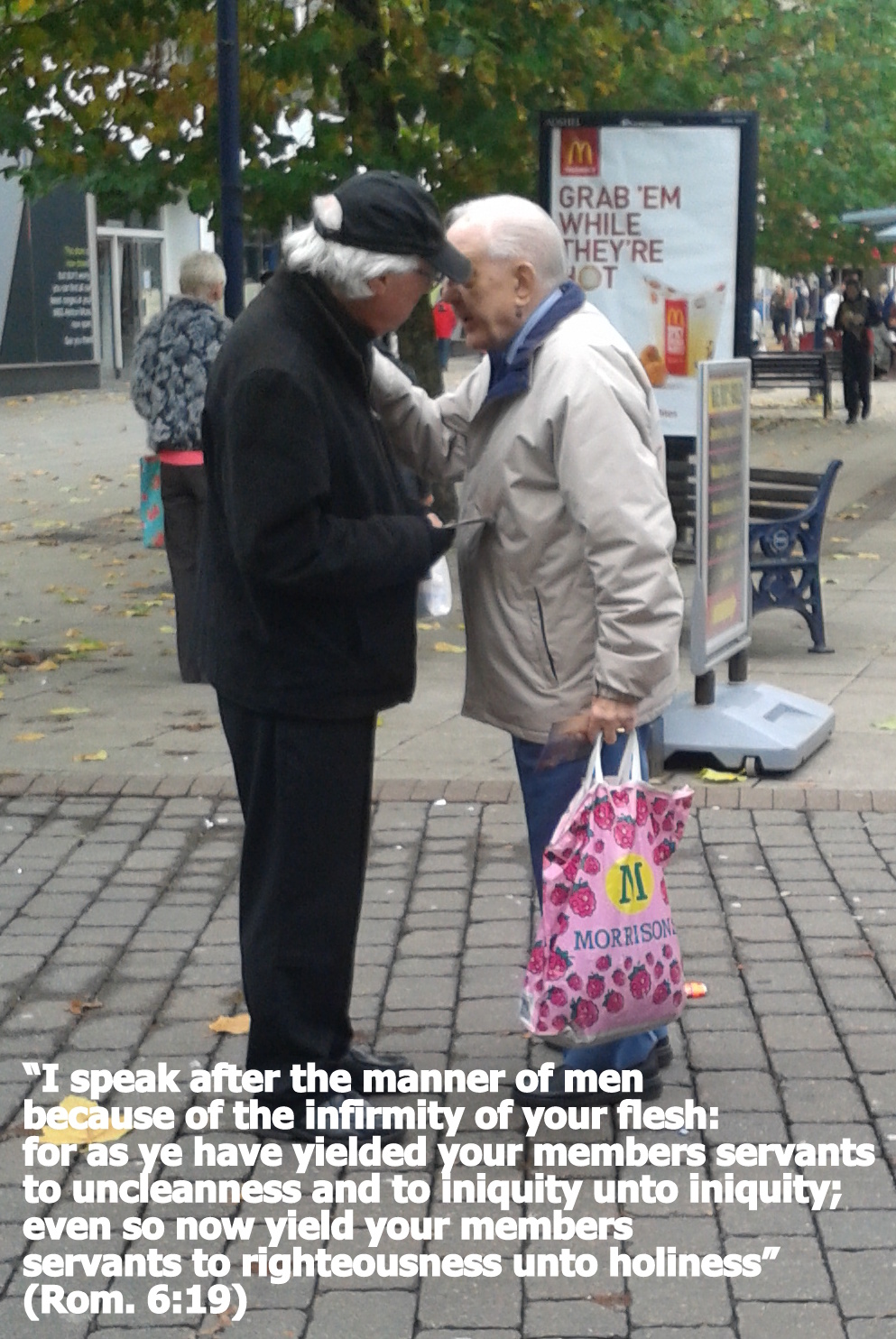 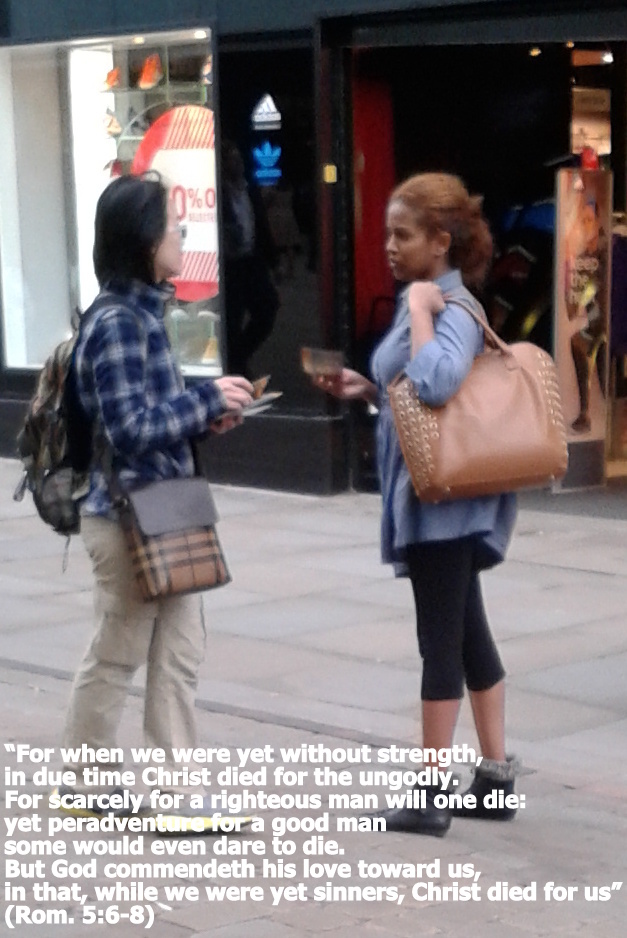 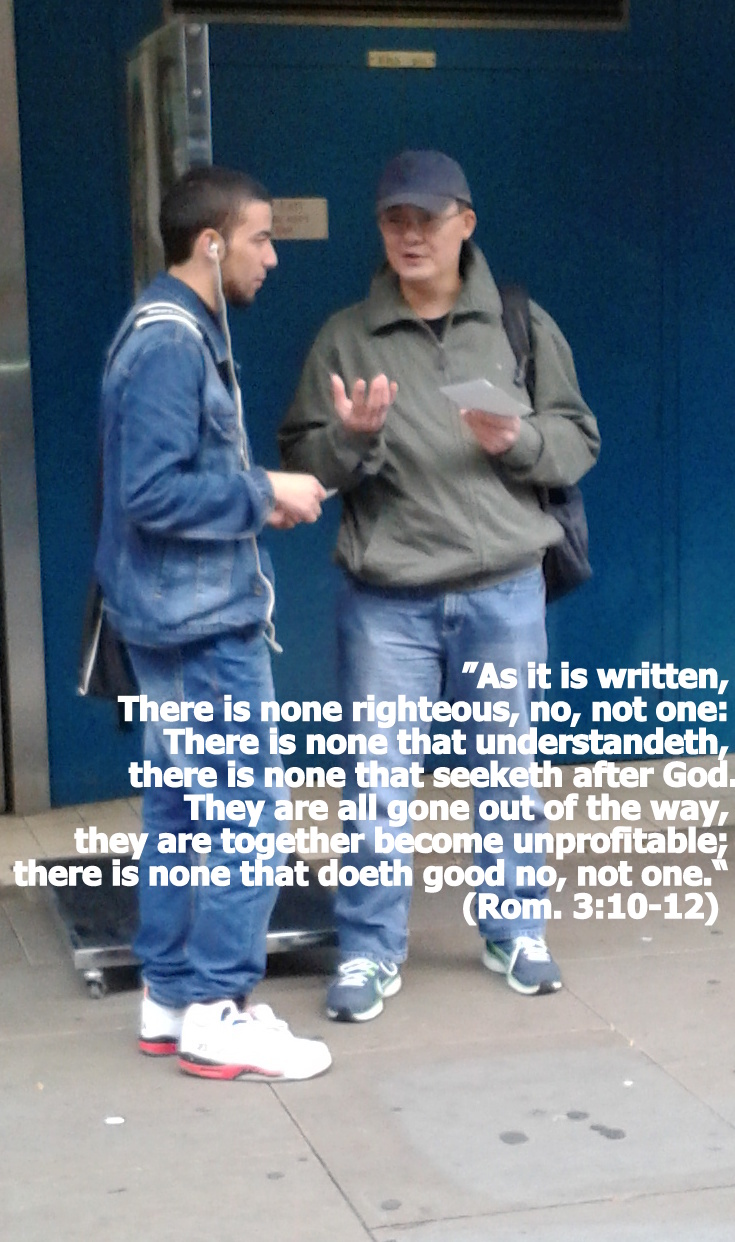 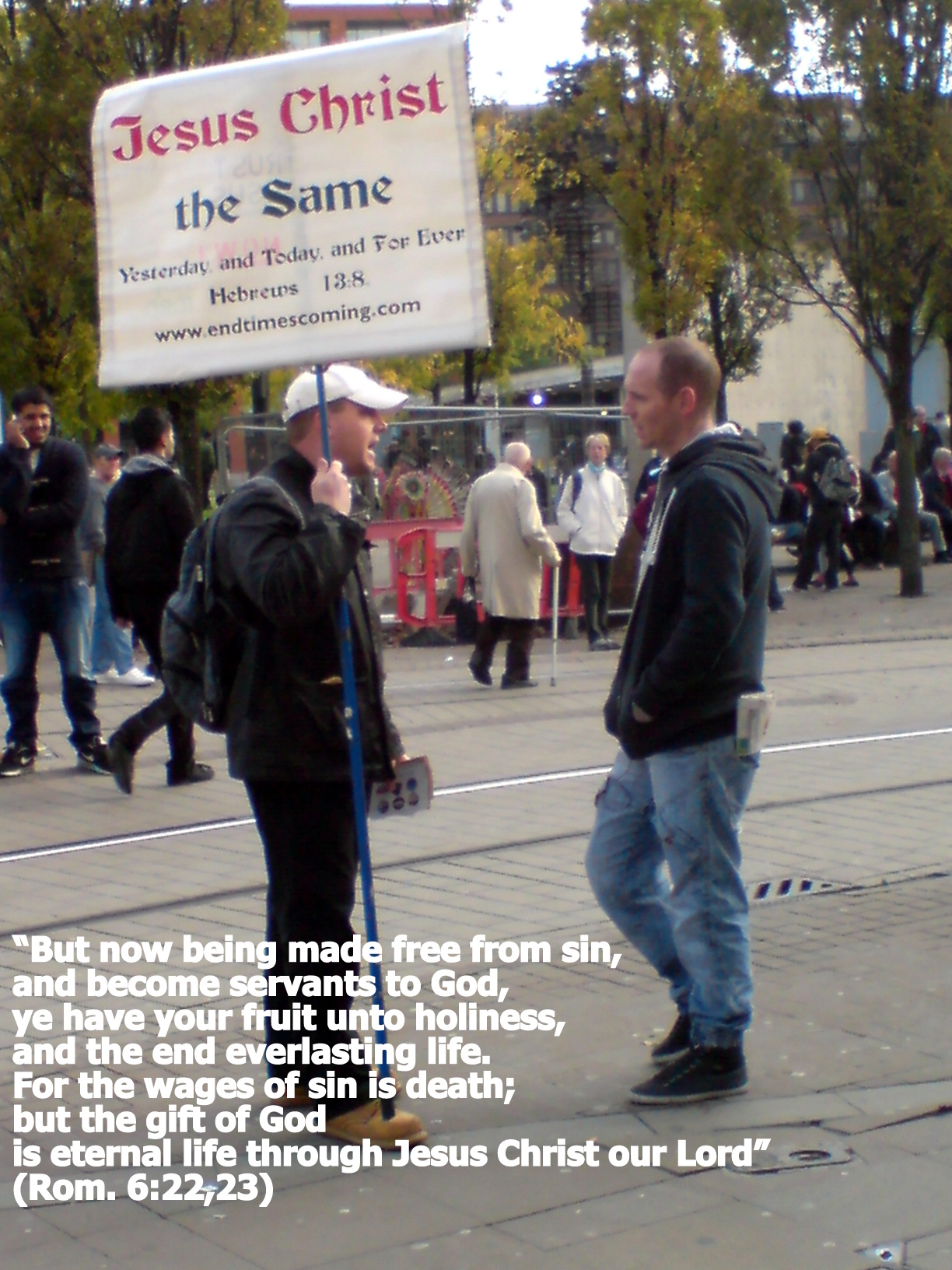 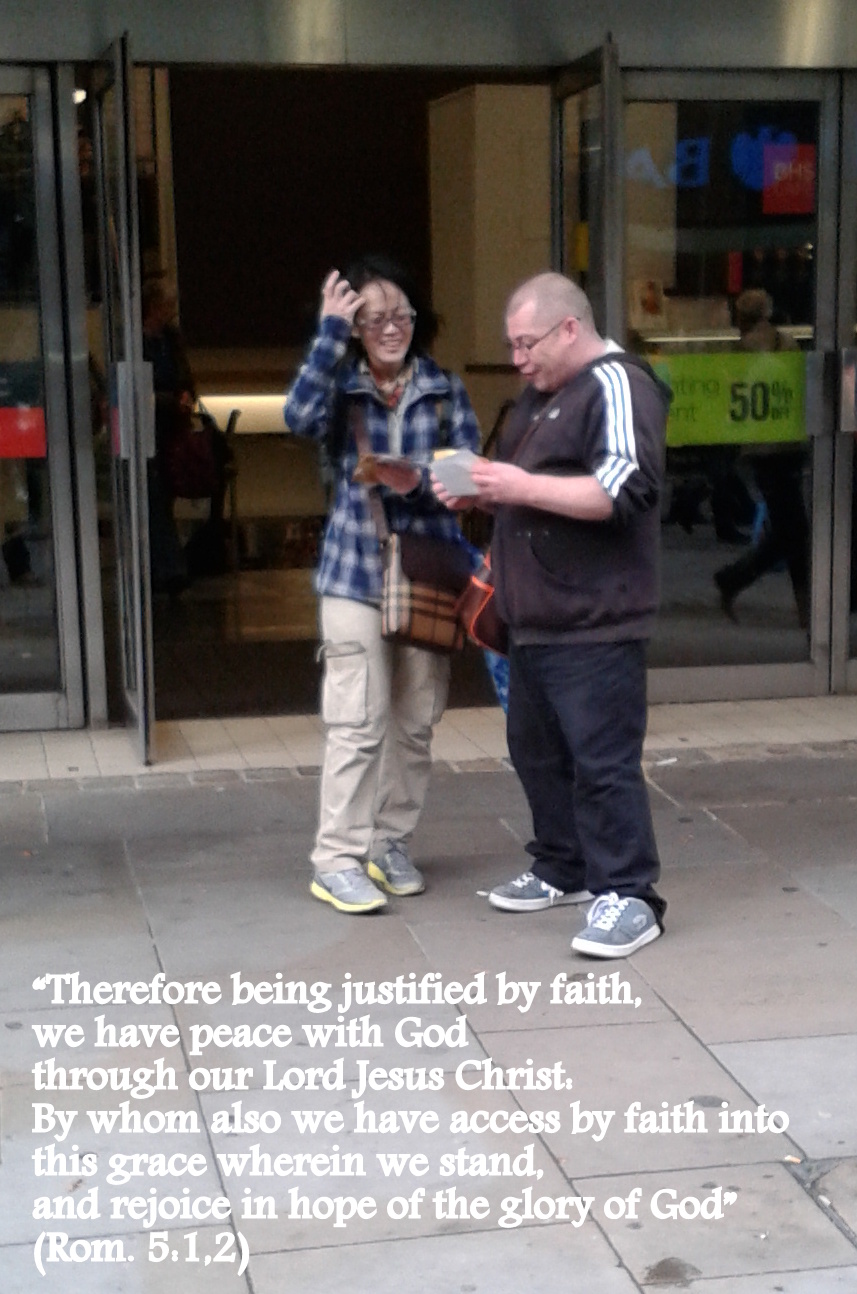 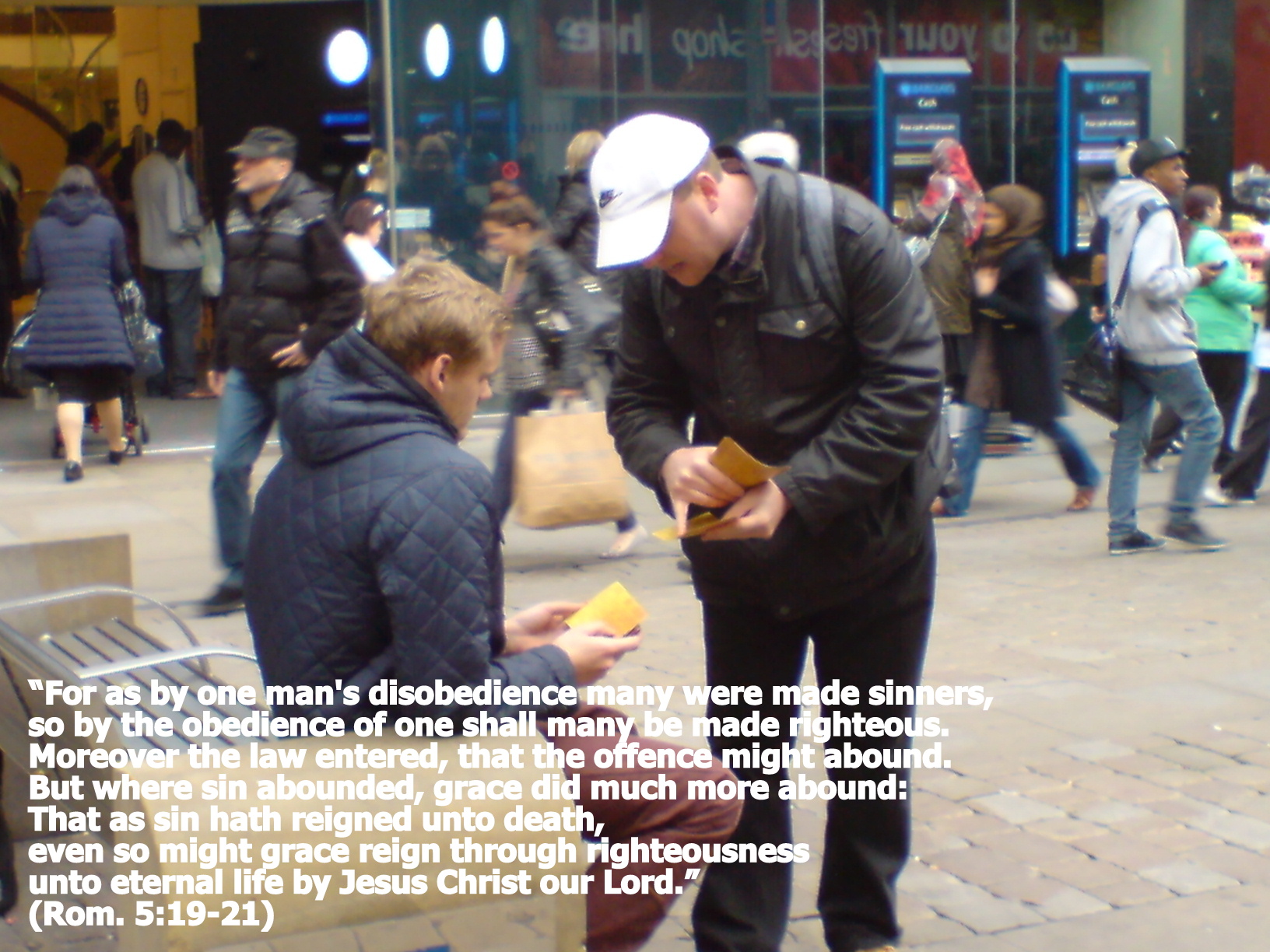 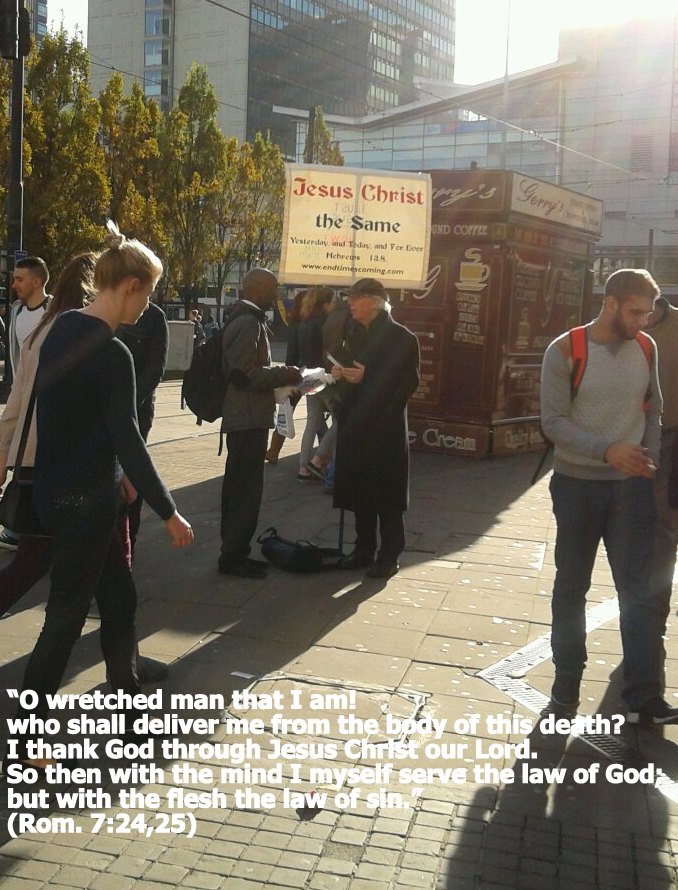