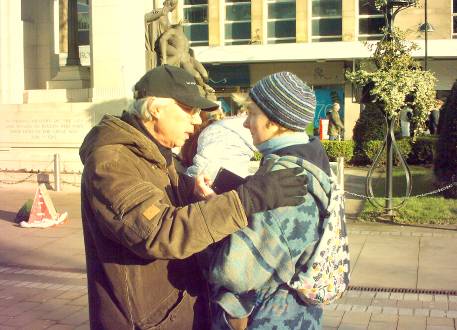 Sister R is a woman we’ve known for several years.

I suspect she is slightly Pentecostal in her beliefs and I also know she left a charismatic church some years ago because of the nightclub atmosphere.

One example would be strobe lights, promoting heavy occult effects, with a rock/gospel music programme as well.

Through the years we’ve had brief conversations, with her asking about our ministry, and always taking our tracts and distributing them in old peoples’ homes that she visits. We always conclude with a brief prayer.

Recently when I met her on the bus she confided that she was under assault from friends, much of it concerned her everyday life.

We talked for a while and I suggested we pray about it, she happily agreed then informed me that she had no family and her friends were falling away.

After praying she expressed a wish to come on the streets witnessing with us. We’ve talked about this before but sadly I have my doubts about this.

She is of a very nervous disposition but I wish she would try it sometime.

Please do remember her in your prayers. 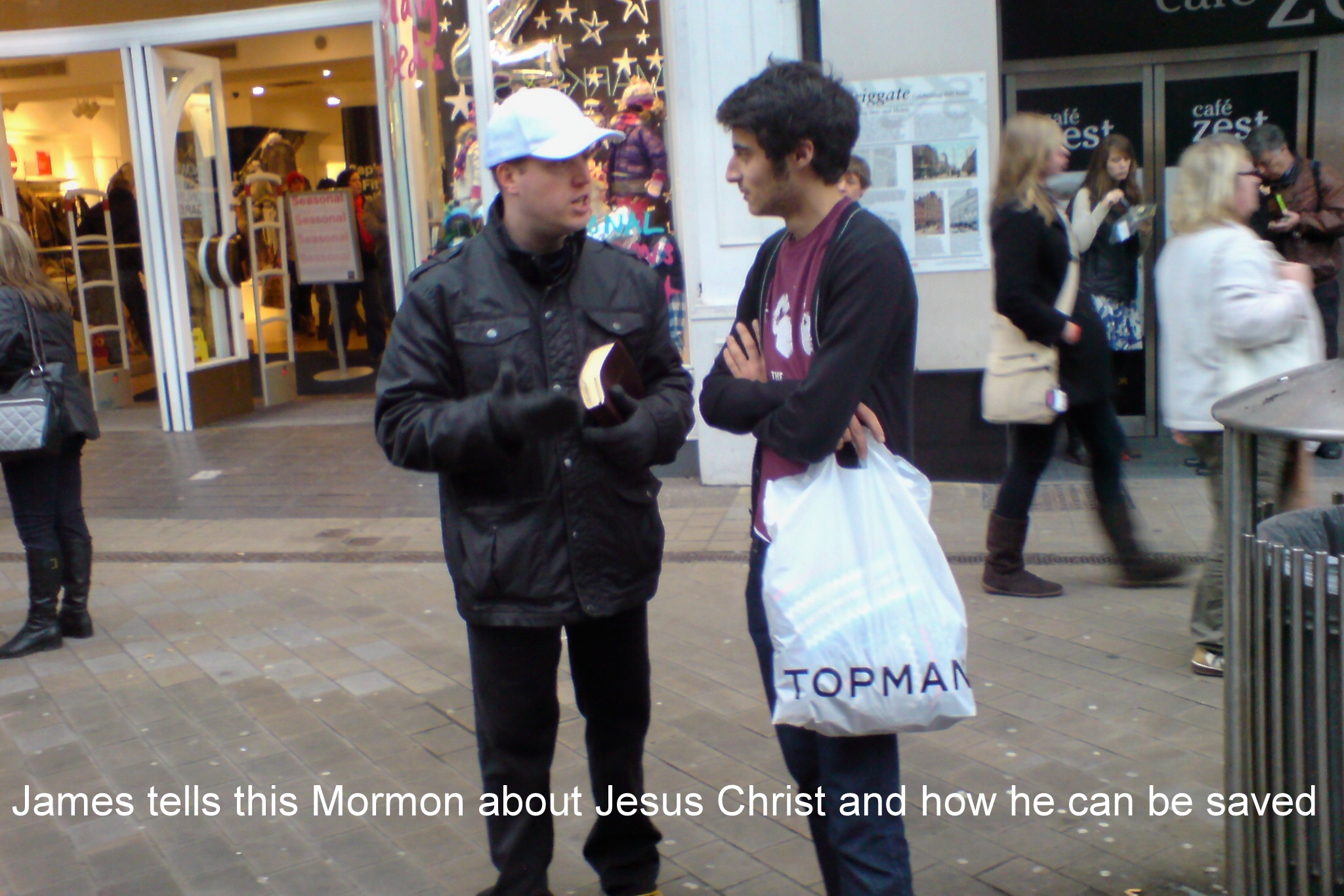 Late November saw our first visit to the city of Leeds. We came across a group of Anglicans promoting their church by passing out flyers for their annual carol service. (Christmas and Easter are the only time’s such group’s venture on to the streets!) We gave the man one of our varied tracts. He looked a little puzzled at first, so we told him that this particular tract was apocalyptic which focused on the fact that Jesus will return to earth one day. (The Second Coming is the main subject in the Bible, along with His death, burial and resurrection.)

I asked him if his church was ecumenical. He gave us the impression that he didn’t know what the word meant. I explained this to him.  He then said, “What’s wrong with all the churches coming together?” I said, “Well, Rome is controlling this movement and they teach a false gospel of faith and works.” He smugly replied, “I just believe in Jesus.” (The devils believe and tremble.) I explained to him that we’re saved by faith alone and therefore being yoked to churches that deny this is unacceptable. He then gave us his tract back and rejoined his friends.

After finishing my street preaching, a man walked over to me and said something along the lines of, “I know you. I’ve seen your videos on YouTube and contacted you about why you don’t like the Mormons”? I responded with, “Did I ever get back to you?” (Due to the amount of mail we get at times, we have to prioritise people that warrant a response.) “Yes, you did and thank you,” he said.

Our 40 minute conversation pretty much revolved around why I believe the Latter-Day Saints not only teach faith and works for salvation, but how they have another Jesus, another bible and another God (2 Cor. 11:4;13-15!) He repeatedly told me how much he liked the local stake house (Mormon term for local church/fellowship) and how many friends he’d made since becoming a Mormon a year ago.

I told him that if his friends were genuine, they’d remain with him no matter what faith he had.

The reason I said this was to emphasise the fact that Mormonism is a false religion and therefore if he wanted to be saved, he’d need to leave the LDS and seek out Jesus with all his heart. We can’t worship God in falseness and deception. Scripture tells us that God demands to be worshipped in Truth and in Spirit (John 4:24.)

By this time it was not only getting dark but he was shivering with coldness, so I expected him to thank me and disappear off with his friend, but he kept asking me more and more good questions. I showed him from my Bible Prov. 14:24 and 2 Thess. 2:8-13, proving how God Himself will deceive unregenerate sinners for loving their sin and even though our hearts can tell us we’re right (like Prov. 14), it doesn’t mean we are.

He told me his father was a Muslim that was critical of the New Testament. I then drew comparisons between the characters of Mohammed (marrying a six-year-old girl and then “consummating their marriage” when she was just nine.) He didn’t know she was so young. I then highlighted the problems with Joseph Smith too. He knew of Smith’s polygamy but seemed genuinely surprised that some of Smith’s “wives” were also so young. I told him how some Muslim writers even suggested that Mohammed was demon possessed (a term he’d never heard before), and then to make the overall point to him, “Can you really say with your hand on your heart, that either of these two “prophets” are good moral men”? His initial silence was evidence that he thought not! I told him how perfect Jesus was, and how one day Christ challenged the Jews to convict Him of sin. They couldn’t. He’s sinless (John 8:46).

By this stage, I pleaded with him to understand that grace was a free gift and that works must be totally omitted from the equation when referring to salvation.

“Please promise me you’ll read the gospel of John tonight. Just one chapter a day,” I said. “I promise,” he politely replied and then to surprise him, I told him to shake my hand. (He’d seen one of my videos in which I said never to do this) and so he smiled at me for “reneging” on this, but as he’s not a missionary and neither an evangelist preaching their false gospel, I didn’t consider 2 John 1:9-11 being applicable to him.

Please pray for this man.