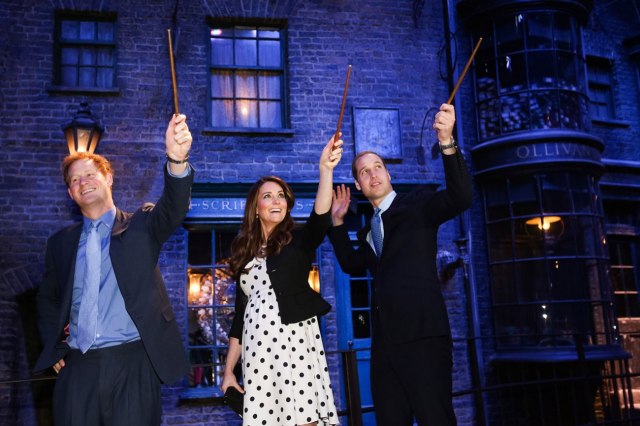 “There shall not be found among you any one that maketh his son or his daughter to pass through the fire, or that useth divination, or an observer of times, or an enchanter, or a witch, Or a charmer, or a consulter with familiar spirits, or a wizard, or a necromancer. For all that do these things are an abomination unto the LORD: and because of these abominations the LORD thy God doth drive them out from before thee” (Deut. 18:10-12).

Having just returned home from a windswept town, where we distributed many Bible tracts and spoke to some people about the Lord Jesus Christ, this disturbing image, showing the excitement of Princes William and his wife Kate, joined also by Prince Harry, as they toured the very lucrative and successful Harry Potter film set, demonstrates just how far the state church has fallen from grace.

With the new archbishop of Canterbury complaining once again in the papers about his ‘concern’ and ‘frustration’ with bankers and their bonuses, maybe he would be better spending his time educating his flock about the dangers of the occult, for the last time I checked, there were more than enough politicians in this country trying to fix the many ills that exist in our fallen world, while preachers are far and few between.

With Prince William one day taking control of the church of England, as its spiritual head, and with a worsening ignorance of God’s word, and an even greater level of secularism and ecumenism, this really doesn’t bode well for the UK.