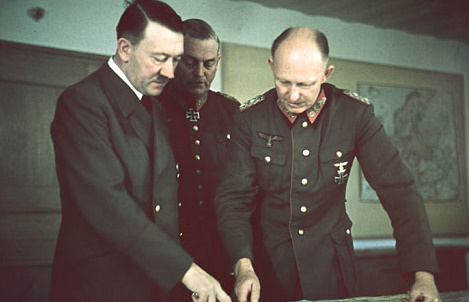 Wilhelm Keitel was I suspect always destined to become a serving soldier (though he claimed in his memoirs he always wanted to become a farmer.)

Descended from a wealthy landowning family, soon the army eagerly beckoned him. Not for him the plough but instead the sword. During the Great War, he served on the Western Front with honour but was wounded in his right forearm and would later serve in the German General Staff Office for the remainder of the War.

But like so many disillusioned returning soldiers in 1918 and others returning to a new republican Germany, Keitel it seems was disgusted by this and instead was attracted to the Freikorps, then with its fierce emphasis towards the values of the Monarchy and loyalty to Germany. Any Soviet styled ideas exported to Germany would have been anathema to him and many others.

The Freikorps then was under the strict and brutal command of the enigmatic homosexual and an early supporter of the young Cpl. Adolph Hitler, this was Captain Ernst Rohm. Incidentally, he would later claim that Hitler, the new up and coming political orator, was his protege.

As Keitel had been severely wounded in the War this may have put the brakes on his service as an active soldier. But he still remained a professional and would see service in various staff training academies.

However, during this turbulent period of post-War German politics, I suspect that Keitel would have become acquainted with the young Hitler himself, also a disillusioned soldier and artist. Remember both were then in the closed world of the Freikorp. Strangely Keitel later claimed that he didn’t make the acquaintance of Hitler until 1933, but I find it difficult to accept this premise.

Berlin and Munich then were small provincial towns. Both men would have trodden the same streets in those turbulent times.

In 1937 he would become Supreme Commander of the Armed Forces (this was due to a scandal which had erupted against General Bloomberg, the then head of the armed forces. Interestingly his son would later marry the disgraced general’s daughter. After serving on the Russian front it remains unclear if the young Keitel was killed in action in 1942.)

By then Keitel’s personal star was ascending and one can only guess what Hitler, once a lowly corporal, recognized in this landowning officer, but something did indeed attract him. Remember generals of his privileged background were the men Hitler so openly despised and wasn’t Wilhelm Keitel certainly one of this smug breed of men he had known in the trenches and loathed.

Also during the War new generals arrived and were disposed of, some were fired on a Monday only to be reinstated on a Tuesday. Crazy times no less. Yet through it all Keitel survives and from 1939 onwards he is always filmed in the Fuhrer’s company, either in Rome meeting Mussolini or at Munich meeting Chamberlain. Keitel is even sitting next to Hitler on his private plane, visiting naval destroyers, and is seen in the War Room as Hitler pours over large battle maps. Keitel always seems to be looking over his leader’s shoulder. Always it seems to nod to Hitler’s escalating demands.

During the “good years” he witnessed the fall of France (going with Hitler to the forest to sign the surrender document), of which he carefully and militarily oversaw, as well as the fall of the Netherlands, Poland and other conquered Nazi territories. Keitel was there in 1942 when the Wehrmacht went on the defensive instead of the offensive in Russia. The Third Reich was now in ruins and the future fate of both men was now sealed forever. It was the beginning of the end for both men.

But what did the Fuhrer see in him or in his grandiose personality (in one wartime film clip taken on a moving train, Hitler leans over and affectingly touches Keitel’s arm.) Privately other officers called him a lackey and always behind his back. He was Hitler’s poodle, they openly joked. Maybe he was just Hitler’s mascot.

Wilhelm Keitel had never it seems requested membership to join the Nazi party in the 1930s. I wonder why? But later during the War, he was awarded the golden party badge and accepted it. (He can be seen wearing this in a wartime newsreel.)

But it all ended in tears when in 1945 he grudgingly ratified the German forces surrender terms in Berlin, and from there, his destination under armed guard was to Nuremberg prison, where of course Hitler’s race policies had been formulated into the Nazi constitution some years ago. But for Keitel, it would be at the Allied war trials that he would have to give an account of his actions against the Reich’s enemies. (Both James and myself visited this historical building some years ago and not much had changed either since 1945. Unfortunately, we were not allowed the opportunity to inspect the cells where the main captives had been contained (they are still in use to this day!)

At his trial, he was naturally found guilty of war crimes. Then after the verdict, he was hanged on 16th October 1946. End of story.

But at this point in our brief biography, I now turn to The infamous at Nuremberg, a memoir by Col. Burton C. Andrus.  I was very pleased when this book came into my possession

Because some years ago an American Bible teacher had mentioned that he suspected several top Nazis had truly repented at Nuremberg and were saved. We are always pleased when this sincerely happens to anyone because: “Joy shall be in heaven over one sinner that repenteth” (Luke 15:7.)

And he was quite categoric that one of the repenting men was, in fact, Wilhelm Keitel no less. I then felt some further research was needed to confirm this bizarre claim.

And just looking at the book now with its 1969 cover, there is the man himself seated next to Ribbentrop (who also may have repented.)

The book most certainly presents Keitel at peace with himself as he prepares to meet God’s Judgment. (“It is appointed unto men once to die and after this the judgement.”) And much of the book’s evidence comes from an Army Lutheran Chaplin, who was sent to somehow try and minister to those who requested his services in the prison before their appointment with the hangman’s noose. (Lutheran’s in those days it should be stated were not part of the wicked ecumenical movement that openly flourishes today.) He writes of Keitel’s Bible that he found him reading in his cell: “I have carried it through two world wars I know from this book that God can love a sinner like me.”

How true of a wretched man who seeks a Saviour. Was the Field Marshall searching?

Again he concluded his devotions by saying, “God be merciful to me a sinner. Keitel confessed his faith in the all-redeeming love of God in Jesus Christ as his personal Saviour,” finally the Chaplin could write: “I never heard a man pray the way he did.”

This must have made a deep lasting impression on this army Chaplin for him to commit it to paper, but I’m glad he made the effort to recount his experience to the author of the book.

And so much for the Field Marshall’s belief that it is never too late for a man to cry out and repent. Again how true we would confirm.

And did he call on the name of the Lord before his appointment with the hangman? (Incredibly just looking at the picture of his corpse it is quite clear that the American hangman botched the job, something Piermont would have called amateurish.) But I rather like to think that Keitel was saved. I certainly hope so. Maybe one day I will get to find out.

But of one thing I am sure, Wilhelm Keitel is certainly not looking over Adolph Hitler’s shoulder anymore!