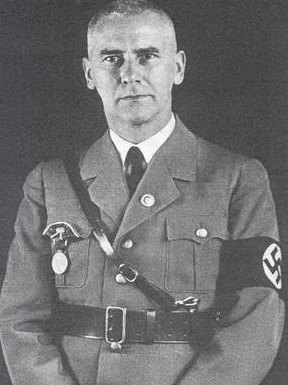 Wilhelm Frick was that variety of creature known as a civil servant and as Adolph Hitler’s Interior Minister (Home Secretary), he would go on through devious Nazi legislation to consign thousands to death, famine, torture and final exhaustion. Sadly every country has them, needs them and rewards them handsomely. (Both your country and mine are guilty in this matter of using their “talents.”) No nation can sadly do without them.

Born in 1900 in Bavaria he would go on to collect several university degrees in law (amongst other numerous talents he had), later after joining the Munich Police, he would become an early admirer of Adolph Hitler and a supporter of the Nazi Party. Previously supporting the “Thule Society.”

By 1924 he was elected into the Reichstag Parliament. (The first Nazi it seems to be awarded this dubious honour.) The mortar of the one-party state was falling into place. The dreaded Third Reich was on its way.

By 1933 – with Hitler claiming the victor’s prize and through other means – he had become Chancellor, and Frick through the courts and legislation could implement a dreadful 235 brutal laws and all, of course, beneficial to the Nazi party, and boy was he Hitler’s man in that Reichstag house of horror!

During those pre-war years and sometimes beyond Frick (always personally anti-Semitic) would help navigate through the courts such acts as forbidding Jews to raising the national flag, introducing the yellow star of David that became obligatory of course for all Jews to display as a sign of disgrace (usually as an armband), as well as issuing future deportation and extermination orders.

The American prosecutor at Nuremberg, Robert Jackson, wrote of him as: “Frick the ruthless organizer.” But he was much more than that and I would have to suggest that Frick the pen-pusher who without hesitation would obey his master’s voice, whatever the consequences.

One cannot ignore his despicable racial Nuremberg laws, his euthanasia and sterilization medical directives and remember that many of the finest German doctors, weren’t all paid up Nazis party members, yet somehow they devotedly “waltzed” along with the murder of innocent lives. These surgical acts remain a blot on the German medical profession even to this very day, and your government and mine are not innocent either using such means when it suits their warped ethics.

Many of these so-called death factories that promoted “Eugenics” for example were well known it seems to the local children who each week would see the dull green ambulances delivering children and others to be terminated by the needle in leafy hidden hospitals. The children interrupting their play would joyfully chant: “Here comes the murder-box again.”

Out of the mouths of innocent children comes truth it is said, how right. And if the children knew what was happening so too must their parents have easily closed their minds to these atrocities of the Reich being committed in their town.

Albert Speer reminisced that Frick was a great music lover apparently journeying to Bayreuth in Northern Bavaria to lose himself in lengthy Wagner operas. I also suspect this certainly endeared him to Hitler, which I believe was the whole point of his musical motives.

Joseph Goebbels, the Minister of Propaganda, dismissed him simply as a fool and certainly by 1943 the power struggle in Berlin (initiated by Martin Bormann it seems) would see Frick demoted (or moved sideways) to being appointed as protector (what a laugh that word is) of Bohemia and Moravia (now Czechoslovakia.)

In the next two years until he would be a willing supporter of his two murderous predecessors in the city of Prague, i.e. Reinhardt Heydrich and Baron Von Neurath in ruling by fear and torture.

As the war continued he would remark later that: “I am sceptical about preventing wars. It’s the law of nature.” Do I perhaps smell a whiff of Darwin here with little or no repentance?

However the war did continue and in Czechoslovakia the death camps of Hodonin, Lely, Terezin, Karlovy-Vary. Sadly not so well known today but evil places all the same. And all part of Hitler’s ethnic “final solution.” Were now working around the clock and with a Nazi vengeance it seems. We have to suggest did Wilhelm Frick willingly preside over all these national atrocities and did Hitler’s “meek” minister ever raise a feeble finger in protest? It seems unlikely because by now he was too deep to ever dig himself out of this Nazi mire.

Amazingly Frick even after Hitler’s suicide could still later refer to him as “a genius.”

Frick explained this bizarre statement by declaring: “Hitler was undoubtedly a genius but he lacked self-control.”

By 1945 with the wars bitter end and Hitler taking the cowards easy exit millions in Europe were on the move home, none more so than Wilhelm Frick. He instead would make the journey from Prague to Nuremberg (158 miles) but for him, however, it would be a one-way journey. He would never see his home again. Now justice for Frick and the other Nazi defendants would be admonished by the conquering Allies.

After a brief (hotel) internment Frick with others was placed under the supervision of Col. Burton Andrus and in his book he describes Frick as five foot seven inches tall, weighing 158 lbs and scoring an IQ of 125. The Colonel also found him: “taciturn and stony no one could possibly tell what feelings he had.”

Later Frick would plead “not guilty” in that wood panelled courtroom of the Nuremberg building. (We visited this room some years ago and little has changed.) He even refused to testify on his own behalf. I’m not sure why he thought this would help his defence, maybe his attorney advised it. But judgment from a higher authority will one day be visited upon all, so remember you are only one heartbeat away from Heaven or Hell.

Yet even in that Nuremberg courthouse miracles still happen remarked the late Dr. Victor Pearce. In a chapter of his book headed “People we would be surprised to see in Heaven.” Victor elaborates on this scenario.

Just two years after the Nuremberg executions Pearce learned about an American army Chaplain, Henry Gerecke. Captain Gerecke claimed that seven of the condemned Nazis soon to be hanged had truly repented of their sins and accepted Christ as their saviour. The Chaplain had rejoiced.

One such prominent penitent was Wilhelm Frick who had previously rejected repentance and forgiveness as spoken of by the Chaplain to him and others at the weekly Sunday service in the prison. Frick lamely admitted: “We Nazis broke a divine law in persecuting the Jews. By it, we were doomed to defeat.” But was this just a doctor of law using a legalistic phrase or was it the inner man trying to come to terms with his hideous crimes of the Nazis years through his conscience.

Remember, wrote Victor Pearce, “He helped Hitler impose a reign of terror over Czechoslovakia, a ruthless killer who suppressed the Jews.” This sounds to me like a stark warning to those who persecute the Jews and other races. Even today.

But the miracle that Pearce referred to concerning Wilhelm Frick was recorded in his book and it reads:

“Yet in those final minutes when the Chaplain visited his cell to pray for him and then lead him to the gallows Frick said, ‘I’ve got something to tell you. Jesus appeared to me and told me I was forgiven. I believe the blood of Jesus has washed away my sins.'”

An extraordinary thing to do a few minutes before the man dangled dead at the end of the rope remarked the author. How true we would also agree.

Wilhelm Frick was hanged on 16th October 1946 and like the similar executions, we have written about in this series his was also badly botched as well. Indeed the mess of blood and bruises to Frick’s face confirms this in the pictures released after his hanging by the military authorities.

In Luke’s gospel 15:7 we are informed: “I say unto you that likewise, joy shall be in heaven over one sinner that repenteth more than ninety-nine and nine just persons that need no repentance.”

If the bells of Nuremberg rang the day of those men’s executions, then they may just have been echoing in the sweet portals of Heaven that day with the arrival of Wilhelm Frick and others who had seen the mistakes of their ways and eventually made an important decision to accept Christ as their personal Saviour and that to me is also a miracle.

And as it is appointed unto men once to die but after this the judgment.