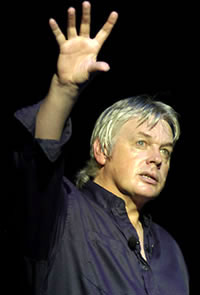 When David Icke first came to my attention nearly 20 years ago, I did wonder whether or not he was just another ex-football player turned TV commentator, trying to re-launch himself with a new career, or whether he was someone different, attempting to get an indifferent world to sit up and take notice of the many ills and deceptions all around us.

For the record, I believe Icke is sincere about what he believes and speaks about, but sadly like all unsaved and deceived people, something of substance is always missing from such doomsday culprits.

In fact, it should also be stated that much of Icke’s new age Hinduistick message of “everything is an illusion” and “nothing or no one is real,” leaves one wondering just how much of this Icke really believes? Because if one takes this to its logical conclusion, money, family, property, etc, etc are also an illusion, so why bother to even speak about something that “isn’t real, to begin with”?!? Clearly, it’s a nonsensical and delusional mindset to adopt and preach, yet it has served Icke and his family very well.

I recall an old friend of the ministry, a Christian psychiatrist telling me how she had “assessed him and his messages online” and considered him to be “suffering from a split personality.” Who knows? Maybe she was correct in her professional diagnosis.

Due to Icke’s unbelief in Jesus and the Holy Bible, he has a very limited understanding about how the world functions and therefore “shortchanges” his audience due to his incomplete knowledge of all the facts, resulting in him failing to offer a full and complete solution to his followers as to where to start to try and put things right. The same is also true of Alex Jones from Infowars.

Men like Icke and Jones are partly capable of detecting how the Luciferians manipulate this fallen world in which we all live, and how the press and media are for the most part brain-dead and biased and, therefore, quite willing and eager to help the wicked and unsaved elite succeed further in their deceit and cover-ups of the truth. Such cynicism and contempt on their part is, therefore, quite understandable.

To keep “David Icke Incorporated” functioning, he enlisted the help of his first wife to run his business, while his second wife follows him around the world, filming and interviewing him alongside his many fans, whenever he does his lucrative one-man shows.

In 2006 I watched a documentary about him and had to cringe when I saw him behaving in a rather “messianic” manner to his adoring disciples during the summer of that year, while they queued to see him at the Brixton Academy.

It should also be pointed out that Icke does not give free presentations but charges around £40-£55 per person for anything up to a 7-hour show!

I would respect him and others, however, if he followed the late Barry Smith’s example and waved his entrance fee. But of course it all comes down to money, and as the word of God tells us, “The love of money is the root of all evil” (1 Timothy 6:10).

One should also note that his DVDs, CDs and books are also rather on the pricey side, so one does need to use discernment when contemplating where his desire to get his “message” out starts, and where his need to make a living ends.

In fact, one would have thought that after seeing one of his live presentations or purchasing one of his expensive DVDs or books, such would be sufficient to now be considered “one of the enlightened ones.” It’s like once a person has seen a decent western movie, you’ve seen them all, right? But after making a good living off his enterprise for 27 years, what further message can he announce, and why do people keep returning to see and hear him? The answer is quite simple: they are hooked on him and his type of message, and as such, they need their “fix.” An expensive fix indeed, but as someone wisely once said, “You can’t tell people how to spend their money.”

So, how did Icke go from being a journalist/goalkeeper to a worldwide speaker on secret societies, and of course his bizarre reptilian views? He claims it all came about after he received a “vision” to go to Peru. And apparently he did just that, and after a 19-hour flight from the UK, and not knowing who or what to look for, he was led to a man waiting for him just as he departed his plane.

According to Icke, this same man “anointed” him for “service,” and off he went back to the UK, to make that infamous appearance on the Terry Wogan show, wearing that hideous tracksuit. The year was 1989 and Icke was ridiculed by his BBC interviewer and audience (not very impartial) when he blasphemously told them how he was “the Son of God.”

Icke has since recovered from this public humiliation and gone on to write scores of books, which have also been translated into several languages.

For my part, as a Bible-believing Christian (something Icke isn’t), there is little for us to discuss and dialogue on. As I said earlier, without Icke being privy to the solution to all of the world’s evils, conspiracies, and also disinformation, in essence, he is merely leaving his bewildered and somewhat disgruntled audience walking around in a daze, not really knowing what to do or even where to start. And because men like him and Jones and other scaremongers are not Bible-believers, they only have half of the facts (if that). While it is true that the world is run by the devil, and that things are only going to get worse and not better (that is, until Jesus returns), what these well-off “professional speakers” don’t know or understand is that the world is ultimately under God’s sovereign control and judgment.

The devil and his forces can only do what God allows them to do. So, it’s rather pointless to focus on this “bloodline” family or that “group” of powerful Satanists, when God is using such to punish unsaved men and women for their rebellion, love of sin, and lack of faith in His Son.

Therefore, until an unsaved person cries out to God to forgive all his or her wicked sins against Him, such a person remains an enemy of His and as such, under His judgment.

Being overly occupied and paranoid about the antichrist, the Illuminati, and the Jesuits (all real and dangerous) is, in reality, a side issue. Yes, they exist but mankind really needs to be focused on the Lord Jesus Christ, and not the antichrist and such wicked despots.

In conclusion to this brief article, David Icke and Alex Jones may be partially correct in what they state, but until they are born again and walking with the Lord Jesus Christ, they actually don’t know any more than you do, are unable to help you find peace and joy with the one true God, and therefore one would be wise to put one’s wallet or purse away, tune out of their almost daily “soap opera” antics and scare tactics, and tune into the word of God and seek the ultimate Teacher, the Lord Jesus Christ, for all of the world’s problems and solutions.

And by the way, Jesus never charged anyone, anytime, anywhere a penny to see Him or listen to Him. Sadly, the same cannot be said about Icke and others!