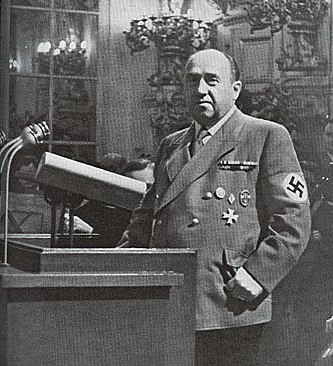 When Walter Funk was reluctantly brought to Nuremberg to stand trial for assorted Nazi war crimes, an American guard commented after seeing him, “gee he looks like a small town grocery clerk;” but the thing is all sinners and all criminals, come in all assorted shapes and sizes, so beware.

Although Funk was seen as a minor actor in the Nuremberg horror show, he has to be seen later in the trial as an important wheel in the Nazi rise to power, during those turbulent post War years in Europe.

Walter Funk was born in 1890 and what he lacked in the good looks department, he certainly made up with a head for figures and making money as much as possible. In that process, he became immensely rich and went on to promote the cause of the new Nazi party. Naturally, Hitler liked him and encouraged him to do what he could for the party coffers.

By the 1930’s Funk was acquainted with all the rich German and foreign industrialists and their money. Through his natural persuasion, he would propel the Nazi party to the top of the money tree and later help prepare for the coming terrible war machine. Remember all wars require finance-they did then and they certainly do today.

Incidentally always beware of the moneyman in any church or political organization: Judas Iscariot is a good example of this profile.

During those hectic pre-war years, Walter Funk managed to be on every economic committee that promoted the financial aims of the Nazi party. This was done by exhorting financial control from Jewish businesses with full confiscation of all their properties and all in the name of the Nazi party and of course a cut for himself.

These certainly were beneficial times for Funk-with opulent palaces-liveried footmen-gourmet chefs flown in from Paris. And Hitler’s Goldfinger delighted in it all; long may it last he must have thought.

But does not Psalm 144:4 remind us: “Man is like to vanity his days are as a shadow that passeth away.”

How true, then and now.

Now the Reich bank president could later acquire a vast country estate and would entertain many celebrities, including prominent classical musicians who were happy to dine at his table. Funk as an amateur pianist would also offer his musical talents for Hitler to listen to. Later in Spandau for the weekly Sunday service, he would pound away on an out of key harmonium whilst belting out the hymns at the same time with the congregation of seven sinners. We have remarked before all of these religious services will not save you from your sin.

Also with overseas travel, the degenerate side of Walter Funk could be entertained in all of his personal vices.

“Women, wine and food” were always a serious preoccupation with this Nazi. With him always extolling to the bored guards in Spandau of his many conquests, maybe celibacy does this to a confined man. (Hjalmer Schacht, Dr. Funk’s predecessor at the Reich bank and we have also made a video about him, once said that Funk was: “a harmless homosexual and alcoholic” but this statement may have been sour grapes on his part against Funk replacing him!) Yet he would always profess to be deeply religious-maybe it was just his conscience-again he once said perhaps with tongue in cheek: “If everyone remembered the past no one would forgive anybody,” or “the drunk and the childish are always protected by God.”

God protects none of course who are lost or in chains to sin.

“For there is none righteous, no, not one.”

These popular sayings are pure bunk.

Now under guard in Nuremberg and under the steel-eyed Col. Andrus, he learned to survive on 1,500 calories a day. The good times were truly over for Funk and the others. Whilst under the supervision of the American Colonel he confessed to having acquired some venereal disease (perhaps in a Casablanca brothel or perhaps as a youth) that had damaged his urinary tract and for the rest of his life, he would be plagued with its debilities-as well as his bladder and diseased nerves. A benign enlargement of the prostate would cause him pain as well as assorted urinary problems.

As head of the powerful Reich bank, he would be instrumental in seeing that all Jewish gold valuables such as teeth, rings, watches, bracelets and coins would be melted down and produced into Nazi gold bars. (Some years ago whilst researching Fatima, we discovered that some of that swastika stamped gold ingots had been concealed in this so-called Marian “shrine” in Portugal.)

When questioned about his close business relationship with Himmler and the financial rewards he would be given, he would answer with indignation: “Business with the SS I have never done that.” Sounds rather like a title for an autobiography, doesn’t it? Later crates of gold bars, some weighing 75 hundredweights secured in metal crates, would be secretly hidden in the Merkers salt mines in Austria. In fact, the allies also discovered diamonds and banknotes and much, much more when they stumbled across this Nazi-plundered loot.

Funk had also made many trips to Switzerland for the bank of international settlements. Much of these secret dealings with depositing stolen Jewish money and valuables, as well as the allies functions in these banking portfolio transactions, are still very difficult to discover even today. In fact, the Swiss National bank (SNB) pillaged some 440+ million dollars with 316+ million of that total looted from Jewish and other holdings. Big money in any language but as always, Swiss discretion still reigns supreme over the final count.

“I have been a bad man,” he had confessed at Nuremberg. Then willingly admitted to the shocking truth that he had been responsible for the brutal order to be enforced for the swift extraction of gold teeth in the numerous death camps; simply just knock them out!  Funk may never have visited a concentration camp personally (that we know of) but his sticky greedy fingerprints were all over the appropriation orders dispatched from his Berlin office in the Reich Bank and all with his signature.

Later scoring an IQ of 124, Funk was seen in prison as a “hypochondriac and forlorn” and may well have looked like this because, with the others in the dock, he would view the evidence of what had happened in the camps. It was now all on film. Funk, it seems wept after the viewing (tears of contrition or contempt?) Interestingly the prosecution would use his wartime biography, much of it against him, as well so beware what you author about yourself!

Naturally, he was found guilty of war crimes. The waited verdict was handed down to Walter Funk: life imprisonment. He had narrowly escaped the rope it seems.

Later after transfer to Spandau, he would be simply prisoner number 6.

There he would complain about his health and much else. He would be surgically operated on in a cold cell by a willing French surgeon (a first it seems in that grim abode) to have this medical treatment allowed.

In letters to his wife, he wrote: “Recently I dreamt of lice, in old times that meant money to me.”

This is interesting because “The love of money is the root of all evil.”

And do not the sight of squirming lice remain abhorrent to everyone who sees them? A suitable comparison I have to suggest with the crude worship of money today in our fallen world.

From a daily Bible devotional diary given to him by a concerned prison Chaplin, Walter Funk, the chapel organist, would perhaps read of repentance and that all men must seek it if they wish to be saved. One can only perhaps speculate if indeed he did obtain strength to combat his spiritual weakness or left it all much too late.

Finally on 14th May 1957, with his health now in total decline, Spandau finally opened its gates to him. He was, at last, a free man.

In conclusion, Walter Funk, the Nazi who had with others unleashed their evil terror in the “Kristallnacht” against so many innocent Jewish families in 1938 and much too graphic here to relate, would quietly retire to Dusseldorf and perhaps…….dream of lice.

And it was there that the ex-prisoner number 6 died in 1960. The man who had so much confidence in the Third Reich and its lasting survival lived to see its humiliating downfall.

The infamous of Nuremberg – Col. Andrus