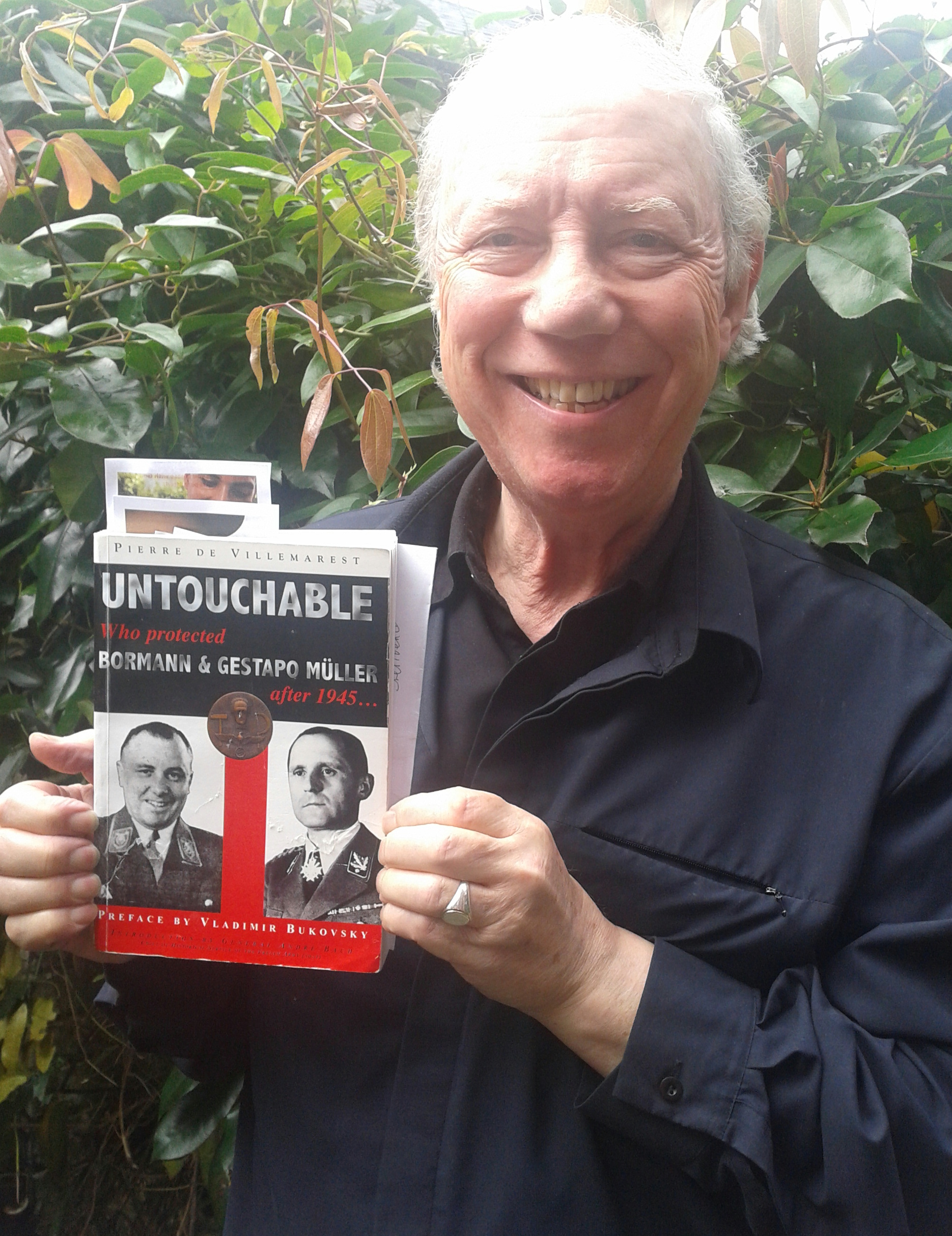 Author Pierre De Villemarest attempts through his book, published in 2005 (title above), to tentatively prove that both Bormann and Muller escaped capture by the allies at the end of the last war. And in this controversial hypothesis, he does a rather convincing job.

Both Bormann and Muller have been featured previously in our “famous and infamous” section, as seen on our website. Please feel free to read.

However where I did find some errors where were the author on page 44, refers to “Emmy” Hoffman, when I suspect he means Henrietta who later became the wife of the Hitler Youth leader, Baldur Von Schirach and on page 43 he claims that Putzi Hanfstaengel, Hitler’s American foreign affairs spokesman (or spin doctor) died in Australia, but in fact Putzi caricatured as Hitler’s popular piano player until he fell out with Hitler, fleeing for his life did finally expire in Munich in 1975 in the town where he had been born.

As regards Heinrich “Gestapo” Muller’s own disappearing debut, no less a political person than Tito claimed, “that Muller was recruited by the external NKVD,” the then Russian secret police before the war, and as for Martin Bormann’s fate, well he apparently died in Paraguay in 1959. So the mystery was deepening even then.

It seems however that in the confusion of Berlin in the final days of the war and with Hitler now dead by his own hand, both Bormann and Muller were able to escape through 4 zones of occupation, and can you believe it, disguised it seems as wood foresters. A vague sighting near the Danish border was reported a few others, then quietly the two men seemed to disappear into the night and into the pages of history.

The author’s evidence is that both Bormann and Muller were, in fact, Soviet agents recruited not so much for political reasons but for material opportunism, perhaps even recruited during the Nazi/Soviet honeymoon of 1937-41.

Both men foolishly suspected that in the pre-war Sovietisation of Europe, Russia would emerge as the power that would rule Europe by force if necessary. Of course, Muller with his “photographic memory,” especially of Gestapo and other agents of the Reich, would be an ideal gift the Soviets would appreciate in building a new network.

Each man hoped to play an important role in post-war Europe or so they foolishly thought. In fact, both of them backed the wrong horse.

And Muller, ever the policeman that he was, down to his black kid gloves and truncheon, somehow envisioned an important role in Stalin’s new world order for himself. Muller, the so-called, “man with no lips was incapable of feeling pity,” one witness who remembered him without any affection. A cruel man it seems.

Bormann I suspect had other personal aspirations to be perhaps the future chairman of a Nazi post-war European syndicate that would be heavily financed from over 750 companies “set up” in dollars and gold secretly shipped out of the dying Third Reich on Bormann’s authority. From 1944 onwards, apparently, eight to ten submarines were shuttling between Germany and Latin America, with criminals, cash and connections on board, and all under the allies nose.

In fact, Bormann had instructed the influential “Deutsche Bank” to transfer almost 115 million Pesos to three waiting banks in Buenos Aires, and with a further 10 million dollars to be delivered from “Banque Sarasin” in Basle and the “Credit Suisse” in Lausanne to Argentina. (I have to speculate that Bormann did indeed make the acquaintance of Eva Peron before her famed European trip after the war to perhaps money launder for him, items such as Nazi gold, diamonds, paintings and deeds for real estate.) But it’s big money in anyone’s language. Of course Bormann, the ex-gamekeeper certainly knew which financial strings to manipulate for his advantages and never anyone else’s.

And Bormann ever the schemer would have witnessed by 1948 which way the political wind was blowing across an exhausted Europe. As Mrs Goering once remarked: “Bormann was manipulating all of us.” But by now financially the Bormann war chest was up and ready for business to eventually establish “the Fourth Reich” or so he hoped. Author Jochen Von Lang in his book Bormann the man who manipulated Hitler, comments on Bormann’s “brilliant business acumen,” amongst other things.

It should also be remembered more importantly that both these men were wanted as war criminals and yet with ease, they were able to travel where they so wished, all very strange one might suggest. Certainly, the power protecting them, according to the author’s research, was Stalin himself and without his aid, both men would and should have been hanged at Nuremberg.

In plotting the two men’s escapes in that post-war days the author has drawn heavily on intelligence files and especially from the old Stasi files and its precursor K5.

During the 1945-59 era, Martin Bormann would with apparent ease be sighted in Germany, Spain, Italy, and later in Uruguay and finally, it seems in Paraguay, where he eventually died in 1959, or so the author suggests, perhaps of cirrhosis of the liver. (Again Dr Thomas suggests that it was cancer.)

Both he and Robert Ley suffered from alcohol abuse so this a likely condition.

However, the author, Paul Manning in his book Martin Bormann, Nazi in exile, claims that “he was alive in Argentina in 1980.” Amazingly Mossad was informed: “To put a brake on our hunting down of Nazi war criminals.” Yet Adolf Eichmann, after a sensational capture in 1961, was to be thrown to the wolves, all very strange.

Amazingly the spider web of companies fashioned and formed by Bormann worldwide would be maintained with Jewish directors on the boards, naturally, this would blunt any Mossad plans to snatch Bormann and perhaps Muller for a future trial in Jerusalem, something Eichmann had been put through until his hanging in 1962.

Bormann and Muller, both born in 1900, seem to have lived charmed lives it seems in those turbulent post-war years.

But what of Heinrich “Gestapo” Muller, the man with supposedly no lips or any trace of conscience. The author claims that he was active in assisting the Soviets in Europe (maybe even Latin America as well) until the mid-1950s. Then Muller was interned it seems: “Possibly in Vorkuta. Apparently, he had got involved in a quarrel with other prisoners and had been throttled by one of them.” Vorkuta was then a remote Gulag prison in the Arctic, one notable prisoner believed to have been held there was Raul Wallenberg and his story will be featured at a later date.

But my own investigation for my own article on Muller and of his collusion with others in “The Final Solution” leads me to the conclusion that he was relocated sometime in the late 1950s and with the connivance of British intelligence and assisted by the CIA to America and possibly to Portsmouth New Hampshire where I suggest he later died of unknown causes. Today “the man with no shadow” as my article about him was named lies somewhere in a delightful New England churchyard and obviously under an assumed name. Yet throughout his loathsome life, he must have sneered at the deception and deceit he had weaved whilst serving so many political masters before the rigour mortise finally set in and only then would Muller face a higher Judge.

Bormann’s death is a mystery within itself even today.

For argument’s sake both Pierre De Villemarest and Dr Hugh Thomas in their books on the subject of Bormann, claim that he died, allegedly in Paraguay in 1959 and was some days later buried in great secrecy in the German cemetery in Ita, some 35 kilometres from the capital in great secrecy. But of course Arthur Axemann claimed after the war that he witnessed Bormann being hit by a Russian shell near the Weidendammer Bridge whilst he and others were desperately seeking escape routes from the bunker.

Bormann was not killed only wounded in the leg and later escaped it seems.

This was confirmed when the Russian, Lt. General, Telegan was given Bormann’s black leather diary, which had been discovered by his shock troops close to some dead bodies. When they were ordered to find the body of Bormann and retrieve it only civilians were to be found in a crater, but of Bormann’s body, there was nothing.

On a personal note some forty years ago, I had compiled a thick file of newspaper clippings and other rare documents, that I had acquired over the years on the whereabouts of Martin Bormann and I remember that he was sighted in the Alps disguised as a Franciscan priest, this being one of many, many sightings of him in Europe. I also recall that British Intelligence had instructed a certain, Colonel Scotland, to lead a small team to locate and detain him. However, I foolishly lent my file to someone with the same interest as me on this subject but sadly it was never returned. But I still hope that one day it might be found and returned after all stranger things have happened.

Now the location and last sighting of Martin Bormann is interesting because in 1972, with refurbishment work being carried out near the Bridge of the last Bormann sighting, some bones were unearthed, what a coincidence!

Later they were confirmed as being that of Martin Bormann, however according to the author, these particular bones had previously been removed from the cemetery in Paraguay by persons unknown, but according again to De Villemarest: “it was child’s play to the secret services” for them to transport, perhaps by the diplomatic bag to Berlin, the skeletal remains to be reburied and await for the digger to expose them for all the world to see. This would finally draw a line over the mystery of his death, much to the relief of the Bonn Government it was hoped.

Where the plot went wrong was that the distinguished Doctor Hugh Thomas wrote: “It is now worth recalling the condition of the Ulap fairground skull of Martin Bormann. It was covered with the gooey reddish-brown clay,” and guess what, only these samples of soil are found in Paraguay and never in Berlin. This must be conclusive evidence that Martin Bormann did not die in the ruins of Berlin.

Later, however, the bones were cremated of Martin Bormann and scattered in the Baltic Sea by his son Martin Bormann Jnr, who himself had doubts about the whole affair concerning his late Father.

In conclusion, the late author, Pierre De Villemarest, highlights many interesting answers to this ongoing mystery, but yet even today in 2012, the secret somehow lingers on and I guess it always will.

P.S. I have emailed the Paraguayan Embassy in London to enquire how I may obtain a copy of the death certificate of Martin Bormann, that would have been issued and signed by a doctor in 1959 and to date, I have had no reply. I will, of course, present any updates if and when they arrive.

Untouchable: Who protected Bormann and Muller, by Pierre De Villemarest