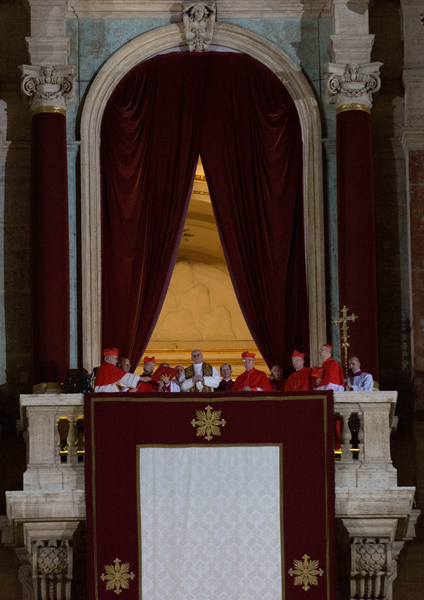 Now that the Argentinian Jesuit, cardinal Bergoglio, aka pope Francis, has had time to get his feet under the desk (and not sporting those red Dorothy slippers but some old-fashioned brogues instead), a certain confusion seems to be leaking out of the Vatican press office, concerning recent pronouncements by the pope about abortion, homosexuality, etc, etc.

This pope, a Stan Laurel look alike, and with no disrespect to the late Lancashire comedian is and has always been a career cleric, so sooner or later, there has to be some “spin” inserted into his mix of words.

It should also be noted that he was a practising Jesuit long before landing the top job in Rome. And from this order, there is, of course, a sordid history of murder, bloodshed and torture to all who stood in their ways of obtaining power, and its distribution from that religious murder inc.

However, the Roman church or the church of Constantine has always been anti the Holy Bible and its saving teachings, as explained by the Lord Jesus Christ. Only faith alone in His saving precious blood can wash away all sinners past, present and future sins, and that includes kings, presidents, even popes and prime ministers too.

Incidentally, this pope is not “the vicar of Christ” nor should he be called “holy father” either. Both titles are blasphemous and strictly forbidden in Scripture (John 17:11; Matthew 23:9), yet the Vatican continues to conveniently ignore this command from the Lord, along with much else.

Also, Rome deliberately declines to feed its obliging flock Biblically but instead misleads them into statue worship, pagan rituals and adoration of Mary.

This Jesuit pope, with a prepared working agenda in his battered leather briefcase, has now arrived on the scene. His churches ambition has always been to promote the ecumenical movement, amongst other so-called “tenets of faith.” And in fact, one of their Jesuit successors some 50 years ago was cardinal Bea, who laid down the fertile groundwork at the Second Vatican Council.

Today most worldwide churches now come happily under Rome’s welcoming umbrella or spell if you prefer, but for the Jesuits, this is simply not enough. Now they must reach out to those secular pressure groups and atheists and feminists who have always despised Christ with glee and would spit in His face if confronted by Him.

These creatures deserve Hell for their attitude and they certainly do not want or wish or deserve to sample the benefits of Heaven. They certainly, with the popes approval, would insist for an abolition of the world’s debts, quickly eradicate poverty in the third world if they could (and didn’t the Lord Jesus predict: “For ye have the poor always with you” Matthew 26:11) and naturally they eagerly eradicated the Holy Bible from school classrooms and still are. Oh and don’t forget the green agenda as well! Sadly most of this is dangerously promoting mindless Marxism and its godless creed. Even born again believers some years ago were crudely referred to as “wolves” by Rome, yet we are the true faithful sheep, the born again believers who follow the saving Shepherd. They are the wolves who one day will face a waiting destruction when the Lord joyfully returns. It may be sooner than ever imagined!

Francis, when he speaks today, is really lecturing to assorted invited audiences, yet it is a political agenda he endorses, and only in the political/religious arena can his church succeed and flourish, certainly from the United Nations in New York, a favourite meeting forum for previous popes and a heathen shrine to Freemasonry and the Illuminati. As a matter of fact all have previously called for the right to make this “a better world” through equal economic distribution, and always to “pray for world peace,” which simply isn’t going to happen and never would according to the Holy Bible, instead it will deteriorate and decay into dangerous wars until the welcoming Prince of Peace returns with ten thousand saints in glory to prepare the destruction of this dysfunctional world.

But did you know that we at this ministry have long corresponded with confused Catholics in its counterfeit system who e-mail us regularly? To them we say with concern and love, to simply get out of its clutches. In fact, run, whilst you can: “Come out of her my people that ye be not partakers of her sins” (Revelation 18:4). This certainly is a warning of what is to come.

The hypocrisy and hearsay of the Vatican Curia have grown in the last fifty years or as the old Red Indians in the movies of my youth used to say: “White man speak with forked tongue.” It’s rather like the serpent in the Garden of Eden all over again when Satan beguiled a willing Eve to submit to his will, and too many Catholics today are falling into that same Satanic snare from this Jesuit pope and his coterie of cardinals.

Do not be deceived and do not doubt that this pope is quickly preparing a one world religion, along with others to one day, maybe soon, to be handed over eventually to the coming Antichrist. Everything is in order it seems to us. But do not be fooled, they are the wolves and he is the false “idol shepherd” leading millions towards death and destruction. Yet we pray that these Catholics may come out of this religious disobedience and submit to the Holy Bible and its Christian teachings. But until then we are called to “rebuke them sharply,” these men in Rome, and their idolatrous rituals, and false religion who bask in their own admiration and papal arrogance and conceit and false worship that is sickening and immoral to encourage and encounter.

Also of amazement to me was of a letter published on 25th September 2013, in which the former pope Benedict XVI incredibly denies all charges or that it was, of course, anything to do with him, concerning the disgusting sexual abuse of thousands of children committed by his priests worldwide for over a century. This is simply not on because as the former “chief of the Congregation for the doctrine of the faith” in Rome, all of these allegations, court summons and Interpol police investigations must have passed across his antique desk. It rather sounds to me like Heinrich Himmler being unaware of what was developing in the death camps as part of the Nazi planned “Final Solution.” I do, however, see Ratzinger as a Reinhardt Heydrich prototype and always a willing “second in command,” following and executing the orders of his boss John Paul II, willingly and complicity.

This former German pope is now fortunate enough to be able to spend his declining days in the seclusion and peace of the Vatican walled gardens, waited on hand and foot and not in some stinking cell with other jailed criminals. Denial is always part of a person’s guilt and this former pope needs to recognize this and finally repent. Today there are still far too many child victims screaming for justice to a church that denies those tears and cries, with it seems, no personal regret or blame on their own part.

Ratzinger has to accept some of that blame and responsibility, in that he must have willingly colluded with his old boss John Paul II to make those allegations quietly go away or be covered up somewhere in the dark sinister walls of Vatican City and beyond. And until he recognizes and publicly repents of this dark secret that hangs over him like a sword, and comes to terms with his past in these sex scandals, he will have no perpetual peace. Forgiveness always comes at a price to the sorrowful sinner but the reward if accepted in all humility is eternal joy from a grace that saves the lost forever.