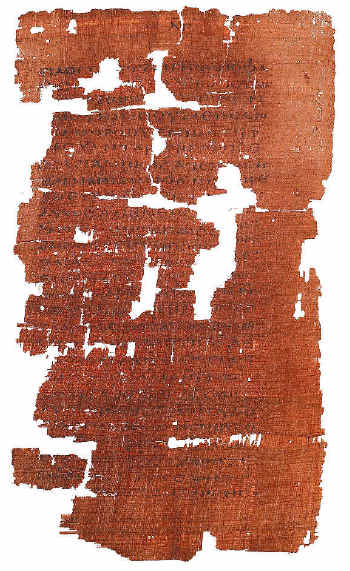 Once again the media are sucked into another religious controversy, I refer of course this time, to the latest manuscript entitled The Gospel of Judas, that was announced with a great PR fanfare by the prestigious The National Geographic Society to the waiting world media this week. But what lousy timing to unveil it, smack dab in the middle of Holy Week – always a solemn occasion in the Christian Church. But perhaps I’m reading too much into this?

It seems, however, that the brittle 31-page epistle was penned some 1,700 years ago. It is of course what is referred to, as an apocryphal book. This is what is being presented to us by the NGS which they recently gained access to.

Whoever the unknown author or scribe was, or whoever was commissioned to put pen to papayas in Egypt in 300 AD, simply did just that. Whatever his motives were, we do not know.

This book is believed, however, to be a duplicate of an earlier so-called perfidious gospel transcribed by perhaps numerous Coptic scholars, maybe just 150 years after the crucifixion of Jesus in AD 30.

However, what the anonymous author does seem to suggest, is that his work “The Gospel of Judas turns Judas’ act of betrayal into an act of obedience…Judas emerges as the champion and he ends up being envied and even cursed and resented by the other disciples,” so suggests Dr. Craig Evans of Acadia Divinity College in Nova Scotia. He may be right in his interpretation of this so called lost volume.

In other words, when Judas committed this act of betrayal he was only fulfilling several of the many Biblical prophecies of the Old Testament. Or, Iscariot had no choice in the matter.

That the manuscript is authentic in its carbon dating, we certainly accept, or as far as we can tell after forensic tests have been carried out on this book. And no way, I suggest, would the Geographic society pay one million dollars in to the Maecenas Foundation, as well as promoting its discovery in two new books, and offering a future television two-hour documentary to be aired on their own cable and satellite channel on, of all days, Easter Sunday!!

In a theological tier, around about 180AD, Irenaeus, the distinguished theologian of the second century, felt bound in his assorted pastoral duties, to quickly denounce the latest gospel of Judas as simply heretical. Indeed, he later assisted in arguing that there be just four inspired Gospel’s for future Bible inclusion. These have come down to us today as: Matthew, Mark, Luke and John. Also, Irenaeus had perhaps known Polycarp? He would later be influenced by his teaching of faith and other assorted doctrines. Polycarp had earlier written that he: “Had known John the Apostle and others who had seen the Lord.” Because of this witness, it would certainly have influenced Irenaeus in his writings of the many false books of the Gnostics prevalent at that time.

These popular teachings were almost propagated by a dangerous rival to the early Christian Church that would falsely suggest Judas as the favoured bogeyman of the Gospel’s. This they set out to rectify through the written word.

In conclusion, Judas was certainly not the author of this spurious document and in fact: “It contains a number of religious themes which are completely alien to the first-century world of Jesus and Judas, but which did become popular later in the second century AD,” so explains Dr. Gathercole of the University of Aberdeen in his reading of the matter.  And, “Judas died 100 years before (the emergence of this so called gospel) was written. It may yield some interesting insights, but there’s nothing here to undermine what Christians have believed through the centuries,” so speaks Mr. James Catford of the Bible Society.

It’s no coincidence, I suggest, that as we are just getting over the drama of Dan Brown’s The Da Vinci Code played out in full in the High Court in London recently, that this should come along and be offered up for serious consideration. However do check out my article on the Da Vinci Code on the website, if you have time.

What all this really does, is divert people’s attention from the true fact that Christ is coming back, maybe sooner than we think.

And yes the mainstream church may wish to keep silent about the Judas book and one has to ask why? The best suggestion in my opinion is to incinerate this deteriorating document as soon as possible and there by consigning it to the dustbin of history, where incidentally it was discovered in the first place!

To me, this is all religious ritual. People’s eternal souls need saving now!

On Good Friday this year, James and myself will be in our local town handing out Bible tracts and trying to explain to people the true meaning of Easter and sacrifice that was bought for this born again sinner, on that cross on Calvary.

And may I wish all of you a blessed and happy Easter?