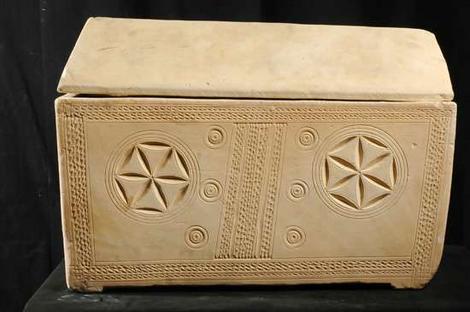 You know it must be that time of the year again when the popular English press happily refer to it as: “The silly season.” You know the sort of thing when the media attempt to inflate their sagging circulation figures by printing preposterous articles rather like lord (Lucky) Lucan (remember him?) has been seen at his favourite casino blowing on his favourite dice-Elvis is alive and well and living in quiet seclusion in….Acapulco. (Where else?) And Sinatra is playing the Copa Room at the Sands Hotel in Las Vegas (yes I know the Sands has long gone) but nothing changes or does it?

One news item that came to our attention at this ministry-we did take rather more seriously than usual and it concerned James Cameron the Oscar winning Titanicfilm director-because he claimed at a press conference that the 2,000 year old ossuary’s or coffins found in Jerusalem in 1980 are the family remains of Jesus and His family. It also seems there were many other inconsistencies in the Holy Bible that intrigued him. Well, well I never knew Mr. Cameron was a Theologian. Did you? Or as he stated a theologist (no such word, James.)

So does this sound all rather too familiar to you – with perhaps just a whiff of The Da Vinci Code about it? (Oh, and look out for Jeffrey Archer’s new novel The Gospel according to Judas written in verse by his son Benjamin Iscariot! (Judas’ son.) The invited book launch was presented to the world media by the author some weeks ago. Lord “Jeff” as he was affectionately known, whilst a guest in HMP North Sea Camp in Lincolnshire, seems to have been quietly reflecting on the New Testament and in particular the events that led up to the crucifixion. In particular, the decisive decision of Judas Iscariot as recorded in the Gospels. Now I never knew Lord Archer took any interest in theological matters either. Did you? (In fact whilst a guest in prison my son James wrote to him telling him to repent and receive Christ but also offering him the chance to send numerous Bible’s to Romania, for a trip he was soon to undertake. No response was forthcoming.) However, his collaborating co-author is a theologian and a Catholic Silesian priest.) The book launch was held in of all places Rome. (I’m so glad the publishers didn’t use Good Friday for the occasion!) Some days later, at another invited book presentation in London’s Westminster Catholic Cathedral, lord Archer also spoke proudly about his latest literary achievement, which I suspect will become an instant bestseller. The finished work (some 22,000 words) seems to have already acquired the blessings of the Pope. (Not sure if he’s read it yet.) But apparently, its theme delves deeply for spiritual inspiration on assorted popular 2nd century Gnostic myths and other texts that concern Judas and his ultimate betrayal of the Lord Jesus. And if we can obtain a copy of Jeffrey’s book to review then we will do so.)

Wel,l the recent hype in the press concerning James Cameron’s controversial allegations resulted in a TV special named The Lost Tomb of Jesus which aired on the Discovery Channel some weeks ago.

In it, the programme’s producers claim that in 1980, 6-10 limestone boxes or coffins were unearthed in a collapsing cave near to Jerusalem. These artifacts claim the producers do after a great deal of research must be the historical remains of Jesus Christ and His family.

And etched on the side of one box in Aramaic-the tongue of Christ-is the name: “Jesus, son of Joseph.” This made the film director very excited it seems.

Another bears the names “Maria and Yose” supposedly Mary and Joseph. The carpenter and his wife. Another reads “Mariamene.” This apparently is the Greek translation for Mary Magdalene. But what excited Cameron’s interest it seems was the scratched declaration on another coffin. These were “Judah son of Jesus.” This claims Cameron confirms that Mary of Magdala bore a son to Jesus.

DNA matter collected from the crumbling bones reveals that Jesus and Mary were neither brother or sister or son and mother.

So naturally, according to Cameron, this implies that they were not married. So according to his reckoning, these bones must be the historical icons: Jesus and Mary as recorded in the New Testament.

Other sources quoted for perusal are: The Acts of Philip and Mary Magdalene. However, both are apocryphal and were composed centuries after the incidents of the New Testament. And were never accepted as divine by the early church fathers. Other references quoted on television are from disputed Gnostic writings as well. (Perhaps James Cameron should have approached Jeffery Archers co-author for his spiritual input into this scenario.)

But back to those Hebrew names scratched on the boxes.

We must remember that Jesus was then the 6th most common male name at the time in that occupied country.

And 21% of Jewish girls used the popular name of Miriam.

So as one noted theologian remarked concerning another Biblical supposition: “Its all rather patchy.” He’s probably right.

Certainly, we at this ministry would agree with him.

So in conclusion, author Dan Brown’s claims after his extensive research that the bodies (of HIS Jesus and Mary Magdalene) may be buried in the beautiful South of France-in Monte Carlo perhaps?)

James Cameron seriously places his celluloid reputation on the discovered bones of HIS Jesus family being interred in that excavated Jerusalem cavity. Now one of these men’s reasoning must be wrong. Mustn’t it? Or are both men’s propositions at fault. I suggest they are. Because it doesn’t add up.

Today most families if possible are buried in a family plot or crypt. Usually if possible in their hometown. Our own royal family, the Windsor’s for example, have traditionally after the funeral placed their deceased in the prepared vault of the chapel in Windsor castle.

Oh, and one cynical journalist called Cameron’s T.V. venture, “Pure Hollywood hogwash.” Well, I’m not sure about that but more investigation on his part was needed to settle this matter one way or another for the viewers and critics it seems to agree with his theory.

However, biblically the Gospels established that the Lord Jesus after three days then vacated the tomb to reveal Himself to His selected apostles and other brethren. (And what an experience that must have been for them!) This is what the Bible teaches and as Christians, this is what we at this ministry believe to be authentic. The resurrection is nothing more than a miracle sent to an unbelieving world at that chosen tenure by God. Today I still marvel at its audacity bestowed upon an unrepentant world. And over 500 people witnessed The Lord Jesus’ appearance as well as hearing Him preach. WOW! And this He would continue to do so until Ascension Thursday when He ascended up to Heaven. Some even suggest He might return on a Thursday. But none can predict the time or place (Mark 16:19 Luke 24:51 and. Acts 1:9 all confirm the Ascension.)

To me, these Holy Bible reference are far more momentous than Brown and Cameron’s absurd suggestions.

And remember one day-perhaps very soon the Lord will return to this fallen world. So if it were today how would he find your particular life style-and would it be to His approval? Now you don’t need a best selling author or a television special director to answer that question – well do you?

P.S. What would make headline news I suggest would be the finding of the lost Jewish Menorah. This 5ft high and 3ft wide seven-branched candlestick was fashioned from a single cluster of gold (approx 94 lbs.) God’s precise instructions for its design can be read in Exodus 25:31-40. Today it is the symbol of the State of Israel.

Looted by the Romans in AD 70 after the sacking of the temple, Caesar Vespasian had it brought to Rome for public display?

Since then it has vanished in the mist of time. Maybe in the end times and pre the second coming of the Lord Jesus, it may re-appear to be relocated again in the Temple in Jerusalem. Which I suspect is its rightful home.