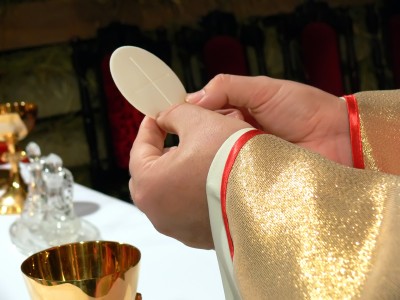 At the very heart of Roman Catholicism is the mass. For catholics worldwide, this is ‘sacred ground’ so woe be to anybody who dares come along and query its legitimacy on Biblical grounds (2 Tim. 2:15).

For my part, I only consider it to be a symbolic event, much like that of baptism. However for me to say this openly, like I am now, I risk being consigned to eternal Hell by the so-called ecumenical/seeker-friendly church, for which my father and I were members of for decades.

The following quote, taken from the council of Trent, speaks for itself:

“If any one denieth, that, in the sacrament of the most holy Eucharist, are contained truly, really, and substantially, the body and blood together with the soul and divinity of our Lord Jesus Christ, and consequently the whole Christ; but saith that He is only therein as in a sign, or in figure, or virtue; let him be anathema.”

As a Bible-believing Christian, now set free from organised religion and saved by my faith in the precious blood of Christ, Rome can retain her medieval and bigoted curse (there are 124 others too), because as far as I am concerned, I believe the folly of the mass to be a religious hallucination. But if you want to believe it, that’s your business; for I am all for the freedom of conscience, unlike like the church of Rome’s 600 bloody years of wicked and cruel inquisition (this monumental crime against humanity, which saw the murder of over 50 million people). But what gives this Baal-inspired priesthood the right to dish out curses to millions of born again children of God that don’t hold to this nonsensical doctrine!

(During the 1960s second Vatican council each of the rulings from the council of Trent was upheld).

The following points are as unbiased as possible when it comes to detailing the major and sensible facts of what John 6 is actually speaking about, not what the catholic church privately thinks it says.

The fact of the matter is, whether a person believes in the hoax of transubstantiation (the bread and wine changing into the literal body and blood of Christ) is immaterial, because the Bible repeatedly teaches that faith in Jesus’ death, burial, and resurrection is what saves a sinner from his sins (1 Cor. 15:17), not church attendance, good works, or other man-made activities and traditions (Gal. 3:2-3).

I would also like to add, that there are many other occasions in the Bible when Jesus spoke to those around Him in metaphorical language, and nearly every time they failed to understand that He was speaking to them spiritually, not literally, and never once did He correct their ignorance; He simply left them in spiritual darkness (Jer. 5:21-23).

“Then answered the Jews and said unto him, What sign shewest thou unto us, seeing that thou doest these things? Jesus answered and said unto them, Destroy this temple, and in three days I will raise it up [spiritually speaking about His body being the Jewish temple.] Then said the Jews, Forty and six years was this temple in building, and wilt thou rear it up in three days? [literal understanding.] But he spake of the temple of his body” (John 2:18-22).

On this occasion, the ignorant Jewish people totally failed to understand what He was speaking to them about, and He didn’t correct their ignorance. He simply left them in darkness and under judgment.

The lady at the well, from the above account, also misunderstood His figurative language, but on this occasion Jesus continued to allow her to question Him, even though she didn’t understand what He was speaking to her about, until He, like He did with Nicodemous (see John 3:3-7) cut through their blindness, and explained the need for the new birth, resulting in both parties going on to be born again.

“It is the spirit that quickeneth; the flesh profiteth nothing: the words that I speak unto you, they are spirit, and they are life” (John 6:63).

This final piece of John 6 makes is about as clear as can be that one’s flesh (meaning what a person does, like eating or drinking) doesn’t benefit you, but that listening and applying His words (meaning to believe on Him) is what saves a sinner.

One would hope that the average open-minded person would be able to differentiate between taking a passage literally and spiritualising it. One can only wonder however why Rome for so long, has failed to do this?