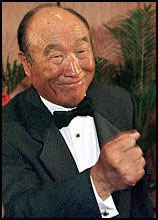 In 1954, ‘Reverent’ Sun Myung Moon, an excommunicated Presbyterian, formed ‘the Holy Spirit Association for the Unification of World Christianity.’

Moon was born in 1920 and came from a poor farming family with ancestral roots in Confucianism. In Kwang Yol Yoo’s book, Unification Church History From the Early Days, he states how Moon experimented in contacting ancestors in the spirit world, during his early teen years, and continued throughout his early life, dabbling in spiritualism too.

In 1984, Moon’s seventeen-year-old eldest son was tragically killed in a car accident. Over the years moon continued to be ‘in contact on a spiritual level’ with his dead son, who he also claimed was able to speak to him, through an unnamed African medium/disciple of Moon.

One Sunday Easter morning, on 17 April 1936, a sixteen-year-old Moon claimed that ‘Jesus appeared to him’ and told him, “To carry out my unfinished task.” Then a voice from heaven said, “You will be the completer of man’s salvation by being the second coming of Christ” (Kwang Yol Yoo, Unification Church History From the Early Days).

However, upon investigation of this so-called ‘vision,’ one soon discovers some series discrepancies: certain Unification publications have stated Moon was fifteen-years-old, other journals claim he was seventeen years of age, while others have him as eighteen years old!

With such inconsistencies and contradictions, one cannot help but be suspicious of all of this. People such as Joseph Smith, founder of the Mormons, have also had this regrettable problem of remembering precise dates and places, which underpins any genuine authenticity of their religious beliefs. They all fail to be consistent to the record of what they have previously said either by word or by mouth!

And if the above contradictions weren’t bad enough, Walter Martin in his book, The Kingdom of the Cults, makes a very interesting discovery. He claims that the date was infamously given of Easter Sunday, 17 April is in fact, incorrect. The 17th was on a Friday, not a Sunday (p. 372-373).

So is this an embarrassing discrepancy, on Moon’s part, or was he simply out to deceive gullible people?

By the 1970s, Moon, the self-proclaimed ‘Messiah,’ had arrived on the shores of America.

This thrice-married man, with over thirteen known children, would begin to take his false teachings across many cities in the United States of America. He would also hope to win support for the then battered President Nixon, struggling against the tide of Watergate (the Catholic church own this vast complex.) 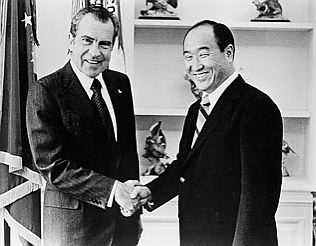 Moon would also take a bold personal stand against the errors of communism (Missiology, July 1975, p. 360). 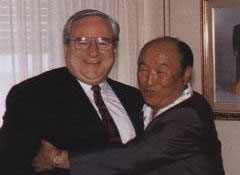 (What did Jerry Falwell have in common with an infamous cult leader? Money, lots of money)

How the Unification Church proselytises

Once again, I find myself scratching my head and asking the same old question: why do people take these impostors seriously? For such false teachers are always opportunists and Biblical illiterates too.

Not too long ago men like Moon would have been incarcerated under The Mental Health Act. However, this is a serious matter for all the many millions of Moonies, who look to their self-confessed ‘Messiah’ of Korea.

They would do well to understand that their eternal souls are at stake and that by continuing to follow the flawed teachings of Sun Myung Moon, they will spend eternity in Hell, with him.

The Daily Telegraph reported (4/11/05) how Moon, after a 10-year ban from the UK, was being granted permission by the Home Secretary to enter this country.

The paper had the following to say about this controversial man and why he had been banned for so long:

“…amid accusations that his church used dubious methods to gain recruits, he will fly into London today…He was also involved in one of the country’s longest-running libel cases in the 1980s after the Daily Mail accused him of ‘brainwashing’ young people…Ian Haworth, the general secretary of the Cult Information Centre, said that he was “saddened” by the news. “Mr Moon hasn’t changed, nor has his organisation. It makes no sense.” He added: “In my opinion, the Home Office is being naive. We will be left to continue to help any families whose loved ones become enmeshed in this organisation.” Mr Moon is flying into London in his private Lear jet with his wife, Hak Ja Han Moon, for what is likely to be his last international trip.”

The paper went on to report the following dignitaries that have been speakers at his many rallies: the former British Prime Minister, Sir Edward Heath, former Russian President, Mikail Gorbachev, former American President, George H.W Bush and Gen. Alexander Haig, former US Secretary of State.

The Daily Mail reported (17/11/07) how the Moonies have reinvented themselves in the United Kingdom (figures for UK membership are estimated to be 1000), by calling themselves “The Women’s Federation for World Peace International.”

According to the Mail, they are not only targeting British mothers but are also using ecumenical language to bring all religions together to solve the world’s problems.

On unnamed source spoke about how worried he is for his wife, whom he described as being, “quite vulnerable;” yet after she returned from holiday, clearly she was different and most disturbed!

At the age of 92, this self-confessed and billionaire ‘Messiah,’ has died. His youngest son will now replace him, but there is the talk of a power struggle between the heir-apparent and his other siblings.

R Martin, The Kingdom of the Cults
E. G. Gruss, Cults and the Occults
B. R. Smith, Second Warning