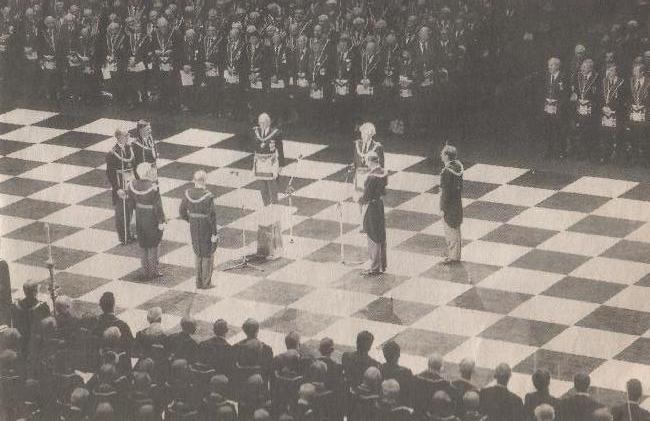 Worldwide Freemasonry can be viewed as two sets of ascending stairs that begin and end together. Any eager young man that takes his first hesitant steps into the unknown world of Freemasonry starts his journey with the first three steps. They are:

Most men will be content to rest in this popular position because by now they will have learnt the secret handshakes and other rituals peculiar to this rite. The first three degrees now form the Blue Lodge of Masonry.

Later they will also have to decide at this point of time whether to either accept the Scottish Rite or the York Rite.

The popular Scottish Rite is represented with 30 steps or degrees. Personal mystic names will be granted to him in his journey to reach the highest pinnacle in masonry.

Five known Masonic figures of the past will meet and accompany him, and it is stated, guide him in his journey. These are king Solomon, king Cyrus, Sultan, Acolyte and George Washington. (Yes that one!)

Each degree is supposed to teach a moral. To earn a new degree the candidate must prepare himself for what will be asked and expected of him as he examines and learns the rituals.

The 32nd degree is the highest degree a participating mason can ever hope to achieve.

The acclaimed 33rd degree will be awarded to him, if he gets there, by members of the shadowy Supreme Council governing body of the Rite.

The Scottish Rite was started by exiled Scottish migrants in France. If, and he does have a choice, he might decide to journey through the York Rite.

The York Rite, according to legend, derives its name from York in England. It was the first Masonic body to be organized. The journeying mason in the York Rite advances thorough ten degrees. These are known by a name and not by a number.

They are as following:

Order of the Red Cross

Order of the Knights of Malta

Order of the Knights Temple

8th Intendant of the Building

9th Master elect of nine elu of the nine

10th Elect of fifteen elu of the fifteen

13th Master of the Ninth Arch: Royal Arch of Solomon

15th Knight of the East or Sword

17th Knight of the East and West

18th Knight of the Rose Cross

22nd Prince of Libanus: Knight of the Royal Arch

23rd Chief of the tabernacle

24th Prince of the tabernacle

25th Knight of the Brazen Serpent

27th Commander of the temple

28th Knight of the Sun

There is continual confusion whether or not Freemasonry is actually a religion?

According to one authority on the subject, Joseph Newton, an Episcopal minister:

“Masonry is not a religion, but is religious.” He further qualifies this by stating:

“It is not a church but a worship, in which men of all religions may unite.”

The problem with this aspect of masonry is that it hints of monism, which is derived from the Greek word for one. This has its many tangled roots in Hinduism, which today permeates many religions that openly worship many gods. All of them are false.

Freemasonry would openly suggest that Christianity is but one religion among many others. No lodge could or would, wish to bring offence to its members who practise other assorted religions. Sadly the Bible is adjusted to fit the beliefs of Freemasonry with any references to Jesus Christ, either played down or omitted. In 1st Peter 2:5, the last three words: by Jesus Christ are deliberately left out or passed over. No prayers, we are informed, are ever offered in the lodges, in the name of Jesus Christ.

In John 8:12, we are graphically informed by Jesus, that HE IS THE LIGHT OF THE WORLD. Those who do not follow Him, WALK IN DARKNESS.

This must I suggest be a clear warning to Freemasons to get out of this false system. And quickly!

“No man can serve two masters.”

This promotes for the mason an ongoing conflict between Freemasonry and Christianity.

To resolve this problem for the mason he must do three things immediately:

Get out of masonry and all of its other contagious habits.

Get out of all organized religions. They remain deeply flawed.

Finally, he must be saved.

To do this, the apostle Paul tells us:

“If thou shalt confess with thy mouth that Jesus is Lord, and shalt believe in thine heart that God has raised Him from the dead, thou shalt be saved” (Romans 10:9).

In preparing this article I was assisted by two books written by the late Barry R. Smith.

Barry spent a lifetime in the quest of freemasonry and exposing its occultist roots. In his book Second Warning, he offers a formula on “How to set a Freemason Free.” As far as I know, he is the only author to ever attempt this important task.

Mention should also be made of Harold J. Berry and his informative little book What they believe: Masons.

As far as I know, the Illuminati has twelve degrees, each represented by a personal name.